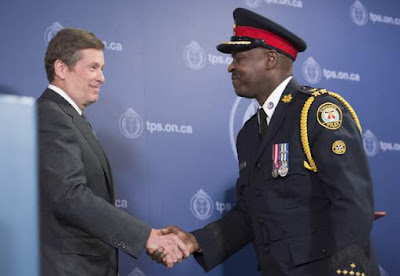 When it comes to the passage of John Tory's second "austerity-without-the Ford spectacle" budget of his term, there is a least the small silver lining that -- unlike in the farce of last year's near budget unanimity -- this time 9 Councillors voted against it.

In doing so they voted for a budget that continues to, quite literally, nickle-and-dime city residents when it comes to city social programs and services, infrastructure, maintenance, housing and anti-poverty initiatives. Despite attempts to claim otherwise and despite minor new gestures that are trumpeted as far more substantive than they really are, these services and budgetary items are pushed to the breaking point while the largest single item in the city budget, policing, continues its relentless and staggering expansion -- an expansion that has continued in inverse proportion to a long term decline in crime rates!

It has now reached the stunningly bloated level of over $1 billion. Yet another in a long line of yearly increases to this budget came at least in part  due to a pay increase for police just last year -- all while the city's mayor and political class insist, obviously falsely, that alleged fiscal constraints make necessary its ongoing attempts to roll back benefits and job security (among other things) for all its other unionized front line workers providing the services that actually allow the city to function.

The attempts failed (and failed by a very large margin) in large part due to the, by now very familiar, over-the-top rhetoric of Tory and Police Chief Mike Saunders that sought to claim that such a small diversion of funds relative to such a huge budget would result in the "loss" of 400 officers and the police not being able to properly "protect" the public -- an obviously and transparently absurd contention that sadly neither the media nor most of council were willing to call them out on.

In the lead up to these votes Tory's office had described the proposed police cuts as "arbitrary" with no apparent sense of irony as to the totally arbitrary way the city has been launching an outright assault on the benefits of city workers or the entirely arbitrary choices that have led to persistent waves of cutbacks, underfunding or non-funding of critical social and infrastructure objectives under two successive Toronto administrations.

The political choice -- and make no mistake that it is a choice -- to prioritize the increasingly militarized wing of austerity enforcement, the police, ahead of the programs, services and infrastructure for Torontonians that so desperately need greater funding, says a lot about the nature and ideology of government in the neo-liberal era. Especially as this choice is occurring, yet again, despite the shift in public perceptions of police in the wake of cases of police brutality, the murder of Sammy Yatim and the shameful and ongoing racist practice of "carding", and despite the fact that it is now known that a report the city paid for but essentially attempted to shelve showed that the police budget is likely substantially higher than it needs to be.

While Councillors and the Mayor then voted, (with the sole dissenting vote of far-right police stalwart Giorgio Mammoliti), nearly unanimously for "radical change" to the police budget next year, there is no reason -- given the long history of promises like these followed by political capitulation to police pressure and the police manipulation of short-term crimes waves or incidents -- to take this remotely seriously.

Mammoliti, at least, was being upfront.

The reality is that the money is there to increase funding for the staff, programs, infrastructure and services that would be of most benefit to those living-in-poverty and the marginalized communities and neighbourhoods that have been left behind by and that face ever greater obstacles and pressures as a result of this city's supposed economic and real estate "boom".

But Toronto's Mayor and Councillors would rather spend it on policing those communities and neighbourhoods instead.

See also: It is not just the police spending in Toronto that is out of control -- it is the police themselves

Posted by Michael Laxer at 9:02 AM