Joe Mihevc and Toronto politicians are "ripping off" the TTC -- Not transit riders! 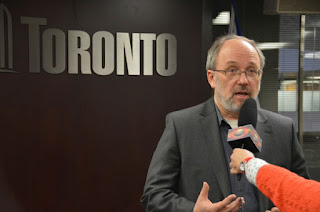 Toronto City Councillor Joe Mihevc thinks the TTC has a problem -- and that problem is all those dastardly fare evaders who are allegedly ripping the fine city of Toronto off!
Mihevc went on TV to state:

“I take the streetcar virtually every day on St. Clair. I notice the number of people boarding on the back door and I do wonder whether some of them are getting a free ride,” Mihevc told CP24 on Friday afternoon. “I have never been asked by a fare checker and I have never seen them checking other people either. The honour system is present in many cities around the world but those cities don’t rely as much on the fare box as we do. We can’t just turn a blind eye to it.”

He goes on to say:


“If you are cheating shame on you. You are ripping all of us,” he told CP24. “We are now looking at a 30 million deficit at the TTC which means less streetcars and less buses and some of that is because some people aren’t paying. That’s not fair.”

This is all pretty rich coming from a Toronto politician!

Never mind that, in his rush to blur and hide the actual reality of why the TTC faces deficits and is chronically underfunded -- which of course is directly the fault of elected officials on all levels such as himself  -- Mihevc has no evidence that those people using the back doors (as they have been encouraged to) which are an essential part of the "proof of payment" system meant to try to speed up overcrowded and frequently late streetcars are, actually, fare evaders!

None. At all. He simply tosses it out there as an "explanation" for the TTC's troubles. If he really does take the TTC everyday he clearly does not think terribly highly of his fellow riders and constituents!

But, moreover, the fact is that "fare evasion" insofar as it exists (and of course on some level it does and always will) is not at the roots of the structural issues facing the TTC in anyway.

When he points out that most cities do not rely on fares to fund their transit systems to anywhere near the extent that Toronto does he is absolutely correct, but that did not just happen -- it is the result of successive municipal and provincial administrations unwilling to do what it took in terms of finding revenue streams through taxation or tolls that would be dedicated to transit funding and who have instead made the burden on transit users greater and greater.

Transit users who are doing the environmentally right thing and who are also disproportionately the young, people from lower income groups, seniors, people on fixed incomes, and the marginalized.

If anyone has been "ripping off" the people of Toronto when it comes to transit it is city council and provincial politicians by not funding the system properly -- which directly results in fares being raised year-after-year.
Did you know, as just one example in decades of them, that in Mayor John Tory's first budget, supported by Mihevc, the annual cost of a TTC Metropass went up more in actual dollars than did the annual taxes paid by the average homeowner in Toronto?
Seriously.
And TTC fares increased again this year as the city's politicians chose to prioritize funding the massively bloated police service.
Never mind that hiring the new TTC goon squad that would be required to harass and police all those riders getting on at the back will not be free! It will cost millions and millions of dollars annually, so perhaps Mihevc could also investigate whether paying for the policing of transit users and constituents is actually even worth it.
Like all those now defunct "welfare cheat hotlines" that politicians promoted a generation ago I suspect it will turn out not to be.
So, you know what, Joe Mihevc and other Councillors prattling on about this are really full of it. When we should be doing everything it takes to make transit more affordable, they do the opposite.
It is the politicians in Toronto's austerity consensus -- politicians just like him -- who are the ones truly at fault for the circumstances we are in and that transit users face. Mihevc and the rest of them should stop trying to blame others and instead be ashamed of how they have fucked up the TTC.