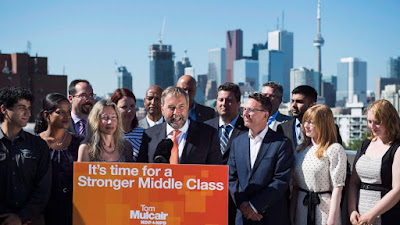 As we head into 2016 there is little that is more pathetic and disturbing from the point-of-view of that ever narrowing band of Canadian social democrats or "democratic socialists" than the descent of the New Democratic Party into a state of abject delusional thinking and total political irrelevance.

This is highlighted by the party's "group-think" circular emptiness that has led it to a dead end from which there is, at present, seemingly no exit.

Going into 2015 the NDP, led by former provincial Quebec Liberal cabinet minister Tom Mulcair, appeared to be in a position to actually take power. The Faustian bargain that party members had made by placing an allegedly "electable" Third Way, Tony Blair style leader -- the most right-wing leader the party has had without any doubt -- looked as if it had a chance of "success" in the electoral sense that was now all that mattered to those who were still hanging around.

Yet this bargain failed catastrophically and disastrously as Mulcair led the party to what can only be seen as one of the most unprecedented failures of "mainstream" bourgeois politics in Canada with the NDP becoming the first party in the country's history to allow a third place party, in this case the Liberals led by Justin Trudeau, to catapult themselves over the Official Opposition and into power.

And it all happened in an entirely predictable, slow-motion derailment the signs of which were clear to many of us on the left but were completely ignored by New Democrat partisans out of what can only be described as an internal party culture that demands almost suicidal compliance and self-destructive obedience to what turned out to be a completely inept leadership clique.

Despite that fact that many left critics, including on this blog, warned that the obvious and intentional shift to the right in the framing of the party's policies would not end well and was out of touch with where the Canadian people were today, the NDP and its partisans insisted that a centrist, uninspiring, empty-headed stab at office would deliver not the New Jerusalem but rather the well-paying jobs that come from the trappings of power and the bragging rights that accompany one's team "winning" something as when a room of chicken wing eating, beer swilling football fans applaud the triumph of this or that side in this or that championship match.

There was glory to be had. And years of very, very good salaries and pontificating soundbites of "social democratic" politicians being so very responsible and so very governmental as they gave press conferences to explain why more press conferences were needed to admit that the new government was not going to do much of anything.

Tragically for the party something happened on the road to Ottawa. And that something was the unexpected political smarts of Justin Trudeau -- or, at the very least, Trudeau's political advisers.

Sensing the obvious change in public opinion they ran, as did Kathleen Wynne the year before in Ontario, a campaign nominally on the "left" of the NDP. A campaign long on grand rhetoric and, of course, bereft of any real meaning. They were, however, only able to do this as the NDP had abandoned the field altogether and chosen to run a campaign that sought not simply to "reassure" voters that the party would not be much of a change but that also tried to dampen any expectations that its election would accomplish anything in advance.

This proved to be an error that was punished as craven errors like this by power hungry left politicians often are.

In some ways, perhaps, it would have been better for leftists had this shell of an echo of a social democratic party won if only to hasten the disillusion that needs to occur with the NDP in order for a new left electoral movement within or without the party to emerge, but the Blairites commanding the ship were utterly incapable of delivering results.

And so we are in the bizarre political moment in our history where the NDP is seeking to continue to justify its very existence given its now total insignificance and yet cannot do so without attempting to maintain the fiction that it lost not due to its actual political cowardice and emptiness but rather due to this-that-or-the-next-thing none of which had anything to do, of course, with the cabal of political dimwits who ran the campaign.

And so we have bright lights like Nathan Cullen, who ran for the leadership of the NDP in 2012 favouring a merger with the Liberals, and Paul Dewar absolutely refusing to accept any type of responsibility or to admit that the campaign may have been fundamentally misguided.

Instead they insist that it was all due to the niqab issue, "celebrity", or whatever other pathetic excuse for their own failings they can grasp at.

Dewar on CBC Radio sounded almost as if he could not understand how any of it happened.

Cullen, meanwhile, creates an absurd alternate reality where social democratic and social democratic governments cannot run deficits or where allegedly "working people" (as if this is who they aimed their middle-class narrative driven campaign at) will not abide them despite the fact that this can be clearly and demonstrably be proven to be false.

The NDP did not go down fighting on principle as these folks seeking to justify their continued paycheques would imply.

It was not the media and the voters who were wrong, as New Democrats seem to insist, it was the NDP!

It lost entirely due to its abject and obvious lack of principle, its dour and unpleasant leader and its complete inability to confront the vapid "sunny ways" rhetoric of Justin Trudeau or to come up with the "ambitious" ideas that the Liberals were worried they would come up with.

In other words, they lost entirely because they chose a centrist vision, not despite it.

There already was a Diet Coke on offer in the Liberal party. The NDP attempt to frame itself as the Coke Zero option might have succeeded in the horrible empty game that is today's mainstream narrative, but it not only did not deserve to, it ultimately didn't.

When the NDP ceased to be an actual alternative to our present political reality it ceased to have any reason to exist.

This or that wave of public opinion in a very short period could make or break it. Actual Liberals with personality and a paint-by-numbers vision could derail it.

There is no mystery to this. It was telegraphed. The only people on the left who failed to see it coming were New Democrats.

Now the party is claiming to enter a period of introspection while its representatives continue to deny their own culpability in the debacle they participated in and facilitated.

Denial will not change anything or serve those who desperately need a left political alternative well. It serves only to give so many candidates, apologists and party members cover when they seek to absolve themselves or explain why they did not speak up when it might have mattered.

But it will allow the NDP and its truncated narrative and decimated caucus a thread upon which to cling to seek to justify its continued existence when it has become an ideological and political irrelevancy.

See also: Catastrophe: The NDP lost because it deserved to

See also: Doubling down on disaster
Posted by Michael Laxer at 2:33 AM