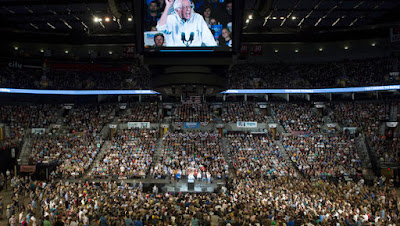 This has been something of an exciting time for many leftists in North America.

The Bernie Sanders campaign has been energizing many, even outside the United States, with its mass rallies, unprecedented campaign ads, powerful attacks on the Wall St. driven establishment political culture in the United States and its seeming resurrection of the idea of socialism in America -- an idea that in mainstream politics had been long dead.

While many on the far left have been dismissive or even hostile to Sanders, he has done something that none have them have come even remotely close to doing in decades-- put socialism back into the discourse. That his version of socialism is basically reformist social democracy does not change that fact.

Yet Sanders has pledged to back Hillary Clinton in the event that he does not win the Democratic Presidential nomination -- and he remains unlikely to win. The same Hillary Clinton who, while she has tossed around some rhetoric of late to counter Sanders' rise,  represents the very worst of liberal and Democratic hypocrisy, reaction and pretend anti-establishmentarianism.

Which poses the fundamental question, when and if Sanders does lose the nomination, what happens to the political moment he and his campaign have created in the United States?

The inescapable reality is that it is almost certain to dissipate entirely and be subsumed into and spit out by the Democratic Party. Many of his supporters will simply withdraw again from the political process, while those who follow into a "lesser-of-evils" campaign to prevent one version or another of American religious or political crypto-fascism from gaining the Oval Office will simply be voting and campaigning now for what is quite literally more of the same.

This was, to be fair, the inherent Catch-22 that Sanders could not avoid. He needed to make his run within the confines of the Democratic primary system or no one would have really paid any attention to or noticed it. Had he run as an independent socialist in the lead-up to and in the election in November he might, at best, have gotten 1-2% of the vote and absolutely zero media attention.

But it may prove a deeply Faustian bargain the end. For if he does end up campaigning for Clinton it is a betrayal of the premises of the "movement" he has been attempting to build and it would also signify that movement's end.

The "movement", ultimately, is centered around Sanders. It cannot exist without him at this point. If he wins the nomination the movement continues. If he wins the Presidency then truly interesting possibilities might emerge.  But if he loses the nomination it is over. Like other political moments, such as the Maple Spring or Occupy, that lacked an organization or independent electoral structure and that failed to build one, the Sanders movement and moment will have run its course.

This reflects a broader problem that confronts the left. As I have written of before, it remains trapped in the leader driven and dominated structures of bourgeois politics and subject to its top-down nature, its fixation on individuals and its frequent descent into what amount to de facto personality cults.

In Canada we see this play out, yet again, in the NDP with the debate around Tom Mulcair's leadership. It is basically impossible to make any broad and coherent case for Mulcair's continued leadership if what one is seeking is renewal within the party -- especially any type of leftist or socialist renewal. Mulcair ran a catastrophic, bankrupt, undemocratic campaign driven by Third Way narratives and fixated around his alleged abilities to "deliver the goods" and to "govern responsibly" if he did. Now that this has gone nowhere, by his own original premises he should resign or be ousted.

But a frequent "defense" of his continued leadership is "who is there to replace him"? In other words it amounts to a negative endorsement of him sticking around. If there is no one "better", might as well stick with the devil you know.

Let us set aside for the moment that this line is predicated on the very insular culture of the NDP in that the only horizon those espousing it can see is to look around at the usual suspects of the Canadian social democratic and union establishment and notice that there are not many personalities of any great interest or energizing talent there! This may-or-may not be true but it also inherently dismisses the notion that someone outside of the power structures of the left might emerge unexpectedly or that perhaps the NDP should look away from mainstream politicians and figures for answers.

More broadly, though, it also returns to a notion shared as well even by many of those on the Canadian left or within the NDP who would like to see Mulcair gone. If not Muclair who? And if not Mulcair where is the Corbyn or Sanders in Canada who can replicate the energy and excitement that they have unleashed?

Even if one does accept the premise that this type of radicalism and renewal is possible within the confines of the NDP and its profoundly anti-democratic structures -- which for a variety of reasons I do not -- it is the wrong question.

The question is not what leader can deliver us a new, broadly based, democratic, leftist and activist movement and electoral force that works both during and between elections in both parliament and the streets for a radical alternative to capitalism and inequality. And it is not, in the end, because the only answer to that can be you.

As long as we continue to see our political deliverance embodied in a leader, we lose.

Even in the rare cases where a figure like Corbyn wins a leadership, leaders are mortal, leaders are flawed and leaders are individuals. They cannot sustain or embody a movement over the long haul even if they do unleash forces that might produce one. We have seen this time and again over the history of the left and have seen as well how the forces of social hierarchy reassert themselves when we fail to alter the fundamentals of the power structures we have borrowed from bourgeois civilization. These forces and structures corrupt and distort even the most revolutionary and radical moments and uprisings and often do so surprisingly quickly.

The real question is how do we take moments when they arise and make figureheads like Corbyn and Sanders, even if they were fundamental in giving rise to them, no longer fundamental in maintaining them? How did we build movements that exist outside of and transcend leaders, their strategists and inevitably short-term goals and that transcend, even while fighting within the electoral arena, the very deep and very real limitations of parliamentarianism? How do we  ensure that, in-or-out of power these parties and movements remain democratic and driven by their members and activists and not a party hierarchy or elite and how do we prevent bureaucratization?

How do we channel the energies of a party into building a mass democratic movement instead of bottling the energies of a such a movement up in a party, its inevitable internal power brokers and conflicts, and their ever present fixation on power as an end in-and-of-itself?

Oust Mulcair and the NDP is still the NDP. How do you prevent a future Mulcair, either immediately in his wake or a leader-or-two from now?

Some parties and organizations, such as Quebec Solidaire, have made some steps to try to answer these questions, but they remain fundamental.

For until we answer them not just in theory but in practice, "good" and even very good leaders will come and go, but the bourgeois, bankrupt and corrupting structures will remain.

See also: The Toronto Sun and National Post think Tom Mulcair should stay on? No way!

See also: Just forget about a Canadian Corbyn -- How a lackluster left in Canada gets the Mulcair it deserves

Posted by Michael Laxer at 9:25 AM