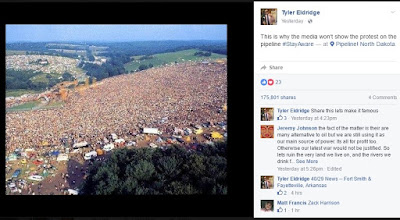 A photo is going viral on Facebook that purports to show the Standing Rock Pipeline protest in North Dakota.

It was posted by someone named Tyler Eldridge and is getting thousands of shares every few minutes, standing at near 200,000 shares at the time of this post.

In his post of the photo Eldridge has the nerve to say "This is why the media won't show the protest on the pipeline #StayAware — at Pipeline! North Dakota."

Except that another reason the media won't show this version of "protest on the pipeline" is that the photo is 100% fake.

It is a photo of the Woodstock concert in 1969 lifted from Getty Images. 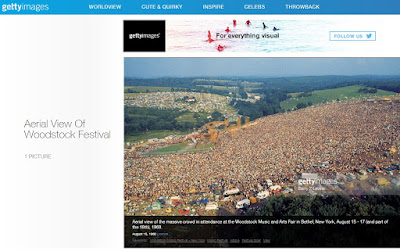 I have no idea why Eldridge would do this or what ego trip he is on leaving this deceptive and fake photo up, but it is harmful to the cause, it is a lie and it should not be shared.

As a poster on the protest page says:

Sharing false information is just as bad as the Main-stream media not reporting on this at all. Message This Tyler Eldridge and force him to remove his harmful post. This is not the kind of attention this situation needs. This is Woodstock in 1969. If he want's to be famous, make him famous for being an asshat.