The myth of political correctness -- That last redoubt of the bigot, racist and misogynist 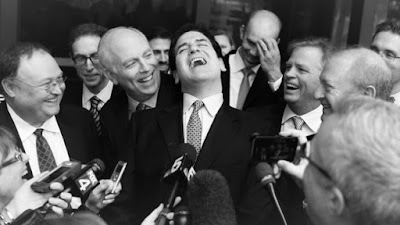 That specter that has haunted the imaginations of the right, and much of the left, for a generation now apparently has risen to new heights as commentators, politicians and angry people on the internet rant and rave about the supposed tyranny that is "political correctness".

By this, of course, they mean the actions of "progressives" or left-wing activists or any statement by anyone from any group that has suffered under the yoke of historic systemic oppression that challenges in anyway, at all, their bigoted, racist, misogynist or homophobic views on something, somewhere.

And so we find that a "majority of Canadians believe that political correctness infringes too much on their freedom of expression, a new poll suggests".

Really? And how exactly does it do this?

"Two-thirds of respondents told the firm "too many people are easily offended these days over the language others use.""

So what is "political correctness"?

Back in the days before the internet and Gamergate brought us the so-called men's rights movement, lies about "social justice warriors" and the racist and misogynist trolls who think freedom of speech is actually about allowing them to stalk, harass and intimidate people, right-wingers across North America were all huddled together in their "think-tanks" and "war rooms" and editorial meetings freaked out by the rise of all those "others" seeking equal rights.

Women, people-of-colour, the racialized and marginalized, indigenous and aboriginal communities, were demanding to be heard, forming movements and coalitions, changing unjust laws, and forcing whites and men to think about our collective, awful history of racist, colonialist, patriarchal capitalism.

People living in poverty were fighting for economic justice. Unions and social policies were making inroads against inequality during the period we now know as the post-war "social compromise".

A President of the United States even went so far as to declare a "War on Poverty".

What was to be done? How were these obviously just and fair struggles to be undermined? How were those whose agenda it was to actually not just prevent but to reverse any gains made to make it seem as if those seeking basic justice were the "bad guys", but those who were racist, sexist bigots were the "good guys" -- or, at the very least, were just "telling it like it is" or "saying just what daddy and granddaddy did?"

Well, as Keyser Soze said about Keyser Soze, "The greatest trick the devil ever pulled was convincing the world he did not exist."

Now, in their hearts, even total idiots know that these historic injustices and terrible crimes have been committed and that they continue to this day. So how do you convince everyone that they really do not exist and that talking or doing anything about them is what is the actual "injustice"?

The "devil", so-to-speak, had this great plan. You simply turn reality on its head and make it out that those who are fighting injustice are actually the elitists who are trying to take away people's "rights" and that those who benefit from, or are at least down with, oppression are, in fact, the oppressed whose rights are being taken away!

And you call any attempt to change the existing, hegemonic political order "political correctness".

Very clever that. Suddenly it was rich people, white people and men who were somehow "under attack" and being "oppressed" as the dastardly hoards tried to even the playing field, fight for equality and respect and stop the almost endlessly ingrained daily rituals of racism, homophobia, bigotry and misogyny that literally permeate every aspect of our society down to its very patterns of speech.

But the myth of the new "political correctness" went much further than that as it also turned people against their own interests. Even if you are making just a few bucks an hour at some dead end job how dare those "elitists" challenge your god-given right to claim to be better than entire swaths of humanity and to spew whatever vile vomit you want to with the buddies over Bud on Saturday night as the bosses are closing the factories down all around you and as the corporations and politicians you voted for are directly working to impoverish you and your family.

The myth, of course, lingers around to this day to the immense benefit of the capitalist classes, white people, the police, men, and millionaire and billionaire politicians like Rob Ford or Donald Trump who get to recast themselves as fighting against "elites" or for the "little guy" when they are doing anything but.

A woman says she does not like being demeaned by loud, ignorant comments or unwelcome approaches in public spaces by men? Political Correctness!

Native American groups demand that the grotesque and obviously ignorant racist names and caricatures of their peoples used by sport's teams like the Washington Redskins or the Cleveland Indians be ended? Political Correctness!

Black Americans rise up and write articles or refuse to stand for the national anthem in protest against police violence, murder and discrimination against them and against the sickening and deeply embedded bias in the so-called "justice system"? Political Correctness!

It is an all purpose smear. Works in so many cases.

And, ironically, its aim is to actually not just inhibit free speech, but to also serve as camouflage for the real political correctness that grips our politics and discourse which bears absolutely no resemblance to the mythological one created by right-wing white men and their useful idiots out there.

So it is that a Colin Kaepernick can actually exercise his democratic and constitutional right to make a controversial and unpopular statement and be denounced and threatened by the very groups and people who rant on-and-on about "free speech" and their supposed right to act like pigs or make ignorant comments in any time, space or place.

So it is that the true political correctness sits right there in front of our eyes but is ignored.

The political correctness of right wing nationalism, obliviousness and racism that exists when white American idiot John Tortorella, head coach of Team USA at the upcoming World Cup of Hockey, can threaten to bench any player on "his" team who tries to exercise their democratic rights.

The political correctness we see when "Brian Burke, Calgary Flames president of hockey operations as well as a senior adviser to Team USA, said the playing field is not the place to make political statements" in a sport whose major league, the NHL, has "support the troops days" that involve disgusting on-ice displays of military might that are overtly and entirely, 100% political.

This is the revolting irony of the old reliable right wing term. The police, enabled by the formidable political power of law and the state, could and do literally kill people every single day but it is the protesting and calling out of the racism of many of these actions by those who lack real political power and who do not have the backing of the state that is what is termed "politically correct".

So it is that Hollywood fossil Clint Eastwood can say of Donald Trump:


"He's onto something because secretly everybody's getting tired of political correctness, kissing up," the acclaimed actor and director said of Trump. "That's the kiss-ass generation we're in right now. We're really in a pussy generation. Everybody's walking on eggshells."
"We see people accusing people of being racist and all kinds of stuff. When I grew up, those things weren't called racist," Eastwood added.

Without noting in any way at all that when he grew up "those things" weren't  called racism because he grew up in Jim Crow America where segregationism was still law! He literally grew up in a country with open and institutionalized legal racism but bemoans not the oppression that, obviously, never had anything to do with him, but the fact people are now willing to call it what it was and is.

How sick is that? How ass-kissing of racist American state power is that? How stunningly, ignorantly elitist from a very rich, old white man in America is that?

It is all of those things and more

It is also a reflection of the ongoing and actual political consensus and "correctness" in North America and it is a racist, colonialist, homophobic, bigoted and sexist one!

And so it is that in our daily lives we are forced to endure that ironically deeply sanctimonious ass that we all know at least one of (usually male) who will blather rubbish like "I don't care what anyone thinks about what I am saying or being PC..." when, of course, these entitled twits deeply care or they would not have made such a pathetic self-justifying statement to begin with.

More importantly, though, it also means they are going to start into (one or more of) some age old racist, misogynist, homophobic, anti-union, anti-working class line of whatever shit they woke up feeling they wanted to puke all over the internet, or at the bar, or at work, or wherever, while getting all primed and ready to defend their total moral emptiness and privilege by saying that any attempt to call them out on it is "just political correctness anyway".

This is the white male echo chamber of one's own bullshit where the only opinion that matters is the one all of the sexist or reactionary hacks hold in common with each other. Opinions that do not stand up to power at all -- that are not rebellious or individualistic -- but that make those who spout them just like every other asshole who says exactly the same thing to justify their willful and wanton ignorance and who always has and who always will.

The myth of "Political Correctness" is just another way to allow those with power to keep it. Ranting on about it is the last battle line of the troglodyte who cannot find any other final defense for the hatred or contempt of whatever group of people it is that they hate or hold in contempt and whose struggles and realities they seek to demean and diminish.

Just remember that behind every usage of the term itself lies a history that encompasses the very worst and most backward notions that our society has to offer.

And when you remember that, don't fucking use the term again!

See also: It was not the American military that fought for democracy and justice. The people -- and people like Kaepernick -- did that

See also: The myth of the leftist, feminist, anti-racist, elitist

See also: In praise of the "social justice warrior"
Posted by Michael Laxer at 11:47 PM