Doubling down on disaster 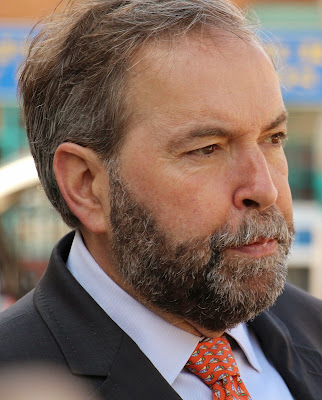 In the wake of the catastrophic election result for the NDP -- an election that saw the party squander its position as official opposition and "government-in-waiting" and what seemed its first real shot at power -- comes news that the leader who "led" the party there, Tom Mulcair, intends to stay at the helm.


And seemingly, apparently, not in some understandable caretaker role while the party finds a new face to try to mount a comeback, but for the foreseeable future:


“He’s in it for the long haul,” his spokesman, George Smith, told the Star after Mulcair spent the past two days speaking to both elected and defeated NDP MPs as he works to rebuild his team.
“Expect to see him in the House of Commons,” Smith said of Mulcair, who was re-elected to his Montreal riding of Outremont Monday night with about 44 per cent of the vote. “Expect him to hold the new government’s feet to the fire.”


While an utterly suicidal move for the NDP, (a point to which we will return), and one that would not happen in any other party, in the NDP for a variety of reasons this kind of politically blind insanity is nothing new.

Hence we saw Andrea Horwath, the ONDP leader whose bankrupt and opportunist strategy in the 2014 election helped to drive away essential Toronto progressive voters and to hand a totally unanticipated majority to the Liberals, not only remain as leader but actually get a higher approval vote from party delegates at the party's next convention!

While to those outside the political culture of the NDP this is no doubt mystifying, it is part-and-parcel of a party narrative that externalizes blame and responsibility for its own actions.

When a campaign begins to or does unravel or tank it is always the fault of the media, "elites", strategic voting, leftists, progressive voters who "don't understand that the Liberals are not progressive and are the same as the Conservatives", etc, etc, etc.

It is never the strategy of the NDP itself, of its core "strategists", of its narratives or of its leaders.

This convenient unwillingness to engage in any meaningful self-criticism flows at least in part from an essential fiction that is shared by the remaining party members and its leadership cliques alike -- that being that the NDP is still the grand party of principle that it was in the past and that. despite all of the evidence, it is still a party that is fundamentally different than all the others.

This collectively maintained group-think delusion is why every election we see the paint-by-numbers denunciations by New Democrats of anyone who dares to deny this mythology and the standard calls for "unity" and "solidarity with the party and leadership" with the claims that criticism should wait until some magical day that never comes.

That this allows obvious ineptitude by the leadership and signs of impending doom, which were visible to everyone but New Democrats themselves in the days leading up to October 19, to go unchallenged and proceed unabated to disaster does not seem to dawn on anyone in any serious way.

It does the party far more harm than good.

This "circle-the wagons" mentality is critical to understanding not only why the party so often seems to repeat the same mistakes, but also why without a major cleaning of the house at the top, absolutely nothing will change.

Especially when seen in conjunction with the NDP's ever more centralized and undemocratic nature and structure which makes the possibility of serious reform from within increasingly remote and quite possibly even impossible.

A very large number of activists, and certainly most of those who believe the party should have a culture of criticism and accountability regarding the leadership, have already left.

Tom Mulcair remaining as leader will ensure that this cycle simply repeats. It will prevent any serious criticism and rethinking of the direction the party has taken to the right and centre over the last few years for the obvious reason that this would have to of necessity involve a serious critiquing of Mulcair's thinking and strategy and that of the staffers around him! Real change for the NDP requires a fundamental questioning of the way the party has been run and has presented itself in its quest to supplant the Liberals as Canada's natural opposition to the Conservatives and even whether this quest, framed as such, is really what should be the party's objective at all.

The NDP did not lose despite the leadership and strategy of Mulcair and the NDP's senior strategists and core leadership, it lost because of them.

The total fiction that the fault lies without will linger on as the narrative until the party and its members accept this reality and cut loose the Third Way, neo-populist and strikingly unprincipled leadership cadres that hang as an albatross around the neck of what once was Canada's social democratic party.

See also: Catastrophe: The NDP lost because it deserved to

Posted by Michael Laxer at 8:06 AM