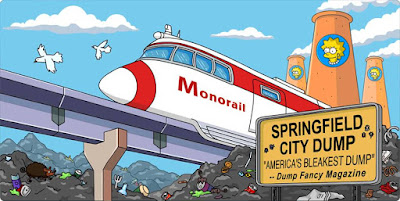 Given Toronto's transit track record, and given that it was a predictably Utopian and nonsensical plan from the start, you had to know that John Tory's absurd 'Smart Track' plan would be derailed by reality sooner or later.

It joins that sad -- and rather long -- list of fiascoes in the transit file in Toronto's recent history. From Mike Harris scuttling subway plans and even filling in tunnels that had already been dug, to the torpedoing of David Miller's relatively visionary LRT centred "Transit City", to the idiotic Scarborough subway extension pushed by Rob Ford that council capitulated to, to putting desperately needed funds into keeping aloft a section of the Gardiner mistake-by-the-lake, to this.

Toronto's transit tale is one of shortsightedness, ignorance and car-crazed political cowardice at its worst.

Today, after months of obfuscation, Tory finally admitted -- without of course actually admitting anything -- that nothing like Smart Track as he proposed it during the election in 2014 would happen at all.

Remember that this plan, which he assured Toronto's voters (despite what he claims now) was completely "doable", was the centrepiece of his entire campaign. So much so that it was on his very election signs themselves!

But it was transparently flawed and predicated on at best wishful thinking and at worst crass cynicism.

Torontonians, however, having bought into entirely fictional anti-LRT (Light Rail Transit) narratives, ate up Smart Track like the citizens of the Springfield of The Simpsons TV show sinking much needed money into a monorail to nowhere.

Today Tory acknowledged that the entire western "spur" of the plan would have to be axed and replaced with an LRT route.

Despite the fact that this eliminates a major part of Smart Track, Tory still tried to frame the reports that he had received from the city's experts as a victory of sorts by claiming that now that he and council had "clarity" the rest of what remained of the plan would be a great success.

Why? Because "the ridership study predicts SmartTrack could attract more daily riders than the entire GO regional commuter system, and could reduce crowding on the Yonge-University subway south of Bloor St. by as much as 17 per cent."

But (and you knew there had to be one), the problem is these "predictions" are based on factors that are not a part of the plan!

Seriously. As The Toronto Star notes:

the report, by the University of Toronto Transportation Research Institute and city planner, said those optimum results would be achieved with trains arriving every five minutes. In the election Tory promised every 15 minutes or better.The best results trumpeted by Tory also presume another uncertainty — that SmartTrack riders would pay TTC fares. Tory’s campaign plan assumed the new service would merit a premium fare.

In other words, these optimum Smart Track results would be achieved only under a plan that is not the Smart Track plan even as optimistically proposed by Tory during the election!

The "projections" might as well be based on unicorns, happy cookie elves and fairy dust. They are totally meaningless.

To make matters worse, the staggering $8 billion price tag for all of this will remain just that despite the elimination of the western spur.

I am willing to make a projection. Smart Track will be a total disaster and far more could have been done for less money by investing in the Transit City idea of a network of LRTs.

So here we go yet again -- a rapidly expanding city with a staggeringly outdated transit infrastructure led by a political class that has us on yet another mystical road to nowhere.