rabble.ca's Tom Mulcair poll and what it says about the disconnect in the left 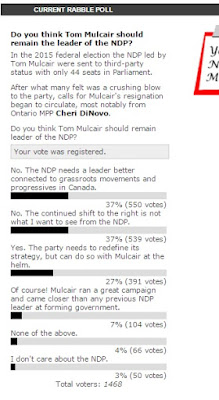 There is an interesting poll being taken on the left-wing website rabble.ca right now. It asks readers to vote on the following question:

In the 2015 federal election the NDP led by Tom Mulcair were sent to third-party status with only 44 seats in Parliament.
After what many felt was a crushing blow to the party, calls for Mulcair's resignation began to circulate, most notably from Ontario MPP Cheri DiNovo.
Do you think Tom Mulcair should remain leader of the NDP?


As of the time of this posting 74% of those who have voted have said Mulcair should go. While online polls are not at all scientific, it remains an interesting result as the website is directed at and primarily read by Canadians who would be politically inclined to support the NDP.

Again, while also not at all scientific, I have seen this sentiment widely reflected in the comments, threads and thoughts posted online by leftists and progressives broadly. It is rare indeed that one comes across unequivocal continuing support for Mulcair. At best one finds a reluctant support based on the notion that there supposedly does not seem to be an alternative to him at present.

And yet, among those with power and influence in the party the overwhelming narrative is that Mulcair and the NDP lost due to any number of mystical reasons related to things like the orbit of Pluto or the alignment of Saturn's rings, as opposed to having lost due to the utter incompetence of the party's leader, strategists and leadership and due to its totally uninspiring and facile attempt to be more centrist and liberal than the Liberals.

On this blog we have looked repeatedly at how the party and its elite refuses to take responsibility for their campaign and its consequences in posts like The NDP, Nathan Cullen, Paul Dewar and the Canadian social democratic delusion, Delusion continues to rule the day in Mulcair NDP, Doubling down on disaster, Mulcair's NDP ran a great campaign! We know this because they say they did, and others.

Broadly speaking progressive Canadians rejected the NDP in favour of the Liberals and many of those same Canadians, as well as leftists who may have held their nose and voted for the Mulcair NDP or who rejected both the Liberals and the NDP, do not share the delusional notion held by the party elite and many NDP members that the party lost in spite of its campaign as opposed to the actuality that it lost because of it.

This disconnect between the party and those that it needs to support it has never been wider and if it continues, and if Mulcair and his crew remain in place following a fundamentally flawed strategy with a compromised and failed leadership, the NDP slide to irrelevance as a meaningless second Liberal party with ever more tenuous ties to labour will be guaranteed to continue unabated.

As noted above in the rabble poll's preamble, one Ontario MPP, Cheri DiNovo, has had the courage of her convictions to step forward and publicly state the obvious. She has called for him to resign, in the Toronto Star, as leader as his leadership is "tainted" and as the party's strategy was wrong-headed.

But, to date, she is the only high-profile New Democrat, inside-or-outside of a parliament, to do so.

With the leadership review vote near at hand at the spring convention of the party, this does not bode well.

After the disastrous Ontario provincial campaign in 2014 the party delegates at the next provincial convention actually gave Horwath's leadership a higher approval vote than they had at the previous convention prior to the election! This is a testament to the party's deeply insular internal culture dominated by a small group of entrenched people and prone to moronic neo-conspiracy narratives about the "mainstream media" duping everyone, and so on, that are used to avoid any serious self-reflection or self-criticism.

Progressive and left wing Canadians outside the NDP know that Mulcair needs to go and that the party needs to find a reason to continue to exist.

But unless those with power within the party or those with influence over it take action it seems quite likely that Mulcair will easily carry the day at the convention and the suicidal and self-destructive course the party is on will continue.

See also: Just forget about a Canadian Corbyn -- How a lackluster left in Canada gets the Mulcair it deserves