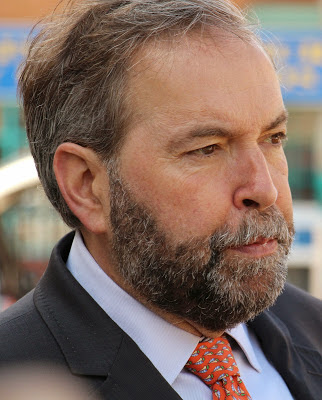 Why is he still there at all?

It is mystifying to anyone outside the NDP (other than the National Post and Toronto Sun whose motives are at best dubious) and mystifying as well to anyone with any political acumen.

It is simply a fact that there is not another mass party in a democratic country that would have allowed a comparable fiasco of a leader to remain in place.

His tenure has seen the worst of both worlds -- an abandonment of principle served with a side dish of electoral failure.

At any rate, the arguments have been made and now it lies with the delegates in Edmonton to decide. But don't let anyone tell you that no one saw this coming...because we did!

For those interested in an unvarnished and unapologetic look at the history of the Mulcair era, here is a The Left Chapter review of the highlights (or possibly low-lights) of the decline and fall of what was an epic catastrophe and an almost operatic tragedy -- that being the end of the NDP's electoral ambitions.

Without any further ado...here are the top ten posts (in terms of hits) about this inglorious era in Canadian social democratic history!

1) Delusion continues to rule the day in Mulcair NDP

In the 2015 Canadian federal election campaign that wrapped up earlier this week, the Justin Trudeau led Liberals won a smashing 184-seat majority government.

Perhaps what is most amazing about the Liberal victory is that the party started in third place in terms of both number of seats and in the polls when the campaign began in early August.

2) Catastrophe: The NDP lost because it deserved to

If in politics a week can be a lifetime, a month can be an eternity – especially in an election campaign.

Just put yourself in the shoes of NDP Leader Thomas Mulcair’s top strategists to see how much things can change over the course of four weeks. On a late August afternoon when members of the Mulcair team looked out on a bright and sunny day from the confines of the NDP war room, they must have been feeling pretty confident about themselves.

4) The NDP's phony “credit card” analogy: a neoliberal conception of the public household

5) Doubling down on disaster

In the wake of the catastrophic election result for the NDP -- an election that saw the party squander its position as official opposition and "government-in-waiting" and what seemed its first real shot at power -- comes news that the leader who "led" the party there, Tom Mulcair, intends to stay at the helm.

And seemingly, apparently, not in some understandable caretaker role while the party finds a new face to try to mount a comeback, but for the foreseeable future:

Perhaps one of the most mystifying things in the aftermath of the 2015 Canadian federal election is that NDP Leader Thomas Mulcair still has a job.

7) Morgan Wheeldon, Israel and the triumph of neo-conservative dogma

8) Mulcair's NDP ran a great campaign! We know this because they say they did

It has now been almost three weeks since the NDP suffered a devastating loss in the 2015 federal election and the party remains shell shocked as to what exactly went wrong.

This week is the week where I think it can officially be said that the NDP leadership "jumped the shark" from any pretense at ties with its roots as a social democratic labour party to a straight-up and very open embrace of Blairite centrism and neo-liberal "progressiveism".

As we head into 2016 there is little that is more pathetic and disturbing from the point-of-view of that ever narrowing band of Canadian social democrats or "democratic socialists" than the descent of the New Democratic Party into a state of abject delusional thinking and total political irrelevance.


This is highlighted by the party's "group-think" circular emptiness that has led it to a dead end from which there is, at present, seemingly no exit.

See you all next week!

Will delusion and insular group think idiocy carry the day?

Only time will tell.

See also: Mulcair's leadership failed even on its own premises -- It is time for the NDP to move on

Posted by Michael Laxer at 8:49 PM