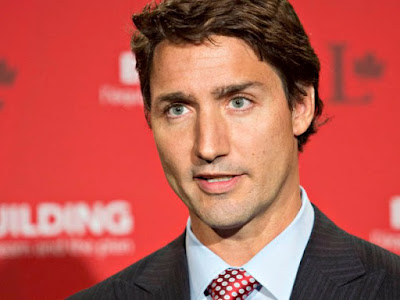 Stephen Harper has no plan to grow our economy and no plan to help the middle class, so he's spending your money trying to convince you that I'm not ready.


Here's what I'm not ready for.

I am ready to do what our opponents won’t: Ask the wealthiest 1% of Canadians to pay more tax so our middle class can pay less. And while they propose massive cuts and austerity, I’ll lead our country with a historic investment plan to strengthen the middle class, create jobs and grow our economy.


By now we have all likely heard one variation or another of this pitch being made by federal Liberal leader Justin Trudeau -- a pitch that very directly seeks to outflank NDP leader Tom Mulcair from the "left" in progressive terms. This one was taken directly from a Liberal campaign email.

While Mulcair has made a fundamentally misguided, and likely untenable, balanced budget pledge, Trudeau has invoked the language and rhetoric of Occupy ("the 1%", "tax the rich") and sought to inspire with a plan that is interventionist and aims to create jobs and growth via stimulus -- something I suspect is far more appealing to many progressive voters than is Mulcair's rhetoric of austerity.

It will be made all the easier for Trudeau to portray himself as the "true progressive" now that Mulcair, grotesquely, has chosen to frame deficit stimulus spending as "immoral" -- even though both of the existing NDP provincial governments either have run deficits to maintain services, are running deficits, or in Alberta's case plan to do so also to stimulate the economy.

In Alberta Finance Minister Joe Ceci has announced an upcoming deficit stimulus plan very similar to the one proposed by Trudeau and using very similar fiscal and economic logic -- and this despite the fact that Alberta is starting from an already existing deficit:


Despite a deficit that will be the largest in two decades, and that the government has warned could grow to $6.5-billion, Finance Minister Joe Ceci says the province could borrow more to speed an economic recovery and create jobs.

“Do we have the money? Yes. I think we would have the capacity to borrow some more for investments in infrastructure,” Mr. Ceci told The Globe and Mail on Friday. “We’re forecasting GDP to be on the growth side in 2016, so an investment in transit and other infrastructure would come at the time when it would bolster a brightening GDP.


In fact, while there is a long way to go, there are some initial indications that Trudeau's pitch is working among the swing voters who actually matter -- progressive voters outside of Quebec (the NDP appears, for now, to be virtually certain to sweep Quebec again).

As the pollster EKOS put it:


Justin Trudeau has helped himself with his proposed deficit-funded infrastructure spending program. Thomas Mulcair, meanwhile, seems to be hurting himself with his promise of a balanced budget, suggesting that Canadians are leery of focusing on fiscal rectitude – rather than kick-starting the economy – when middle class workers have not seen a real wage increase in years. Furthermore, concerns with fiscal discipline are largely concentrated in the Conservative camp, which is largely unavailable to the NDP. At best, Mr. Mulcair may be making himself mildly less objectionable to those who won’t vote for him and ignoring the preferences of his available constituency. While we understand the importance of signalling fiscal prudence, the NDP may want to consider the potential fall-out more carefully.


The key point here being "concerns with fiscal discipline are largely concentrated in the Conservative camp, which is largely unavailable to the NDP" -- a point that NDP strategists of late simply do not seem to understand.

As Fraser Needham pointed out in a piece about the NDP's bizarre decision to campaign from the right, the party seems to be trying to mimic, in the critical NDP-Liberal battleground of Ontario, the tone of the disastrous ONDP campaign of 2014 that sought to appeal to a largely mythical "Rob Ford" swing voter and that resulted in helping to get the Kathleen Wynne Liberals reelected with a majority government in what unfolded as a strategic vote against the Hudak Conservatives.

That ONDP campaign failed for a reason. It alienated progressive voters by sounding very "populist" and right wing, while, in fact, not appealing to right-wingers who in Ontario (and elsewhere) are simply never going to vote NDP in anything close to meaningful numbers. The "Rob Ford" voter is largely fictional as his constituency was a mixture of actual conservatives and reactionaries and the disaffected who turned to or supported him not at all for his "policies" -- such as they were -- but for his grandiose personality and rhetoric.

In fact Ford's polices were largely irrelevant to this second group of voters and as a result their voting decisions and directions outside of municipal politics were going to be all over the map. This can be demonstrated by the results in the various heartlands of "Ford Nation". All of Etobicoke, York and Scarborough were swept by the Liberals in the provincial election, and swept despite the very vocal calls by the Ford brothers at the time to toss the Liberals out of office!

Wynne, though she has predictably governed more to the right, campaigned from the left and directly and successfully sought to appeal to NDP-Liberal swing voters (the only swing voters who actually matter to the NDP in vote rich Ontario) while the ONDP tried to appeal to a group of "swing voters" that simply did not exist -- and did so in very reactionary terms.

Trudeau is doing what Wynne did while Mulcair echoes ONDP leader Andrea Horwath. Trudeau is clearly targeting the soft progressive vote that the NDP is either taking for granted or do not think they need.

Is this cynical on Trudeau's part? When he brings out austerity hatchet man Paul Martin, who launched the austerity era in Canadian federal politics, and when he praises Martin's disastrous and reactionary deep cuts to transfer payments in the 90's (while saying that he would not do anything similar) it certainly seems cynical.

But it is also clever. With Mulcair almost inexplicably -- given that it was his principled stance on Bill C-51 that shifted him from third to first place in national polls while Trudeau's pandering stance cost him dearly -- adopting a very cautious and even rhetorically reactionary approach, this was the hand that Trudeau had left to play. The Liberals exist to win, and if portraying Mulcair as a right wing austerity wolf in progressive sheep's clothing is the way to win, that is what they will do.

Trudeau can only take this approach and make this appeal to progressive swing voters, though, as it is at least in part true.

Mulcair and his strategists, and they alone, have made this possible and allowed him to be able to do this by taking a series of positions and adopting a tone that are both right-wing and wrong-headed and that will be perceived as such by the very voters that Mulcair needs and that were swinging his way.

There is still plenty of time for Mulcair and the NDP to avoid the trap they so clearly seem to be walking into. The soft progressive constituency that is willing to go either NDP or Liberal to both stop Harper and get what they hope will be progressive governance is still very much up for grabs.

But if the NDP continues down this track federally, there is a very real probability that the result in Ontario will be what came of the strikingly similar campaign strategies of Andrea Horwath and Olivia Chow that sought bizarrely to appeal to right-wing voters and that both failed miserably.

And without winning in most of the key ridings in Ontario no progressive party, Liberal or New Democrat, stands any chance of becoming government.

Mulcair and his strategists seem to need to be reminded of this.

See also: The follies of the NDP running a right wing populist campaign

See also: Game Over -- Turns out Mulcair is simply wrong about even today's NDP and deficits