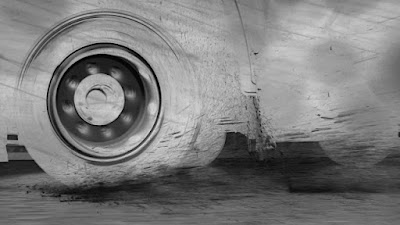 We were supposed to meet at 7pm but Andrew was always late.

I got there, punctual as usual, and slid into one of the booths at the back.

Jackson's was busy, even for a Friday, and I was lucky to get a spot. Waitress, pale, skinny, unfriendly, was a composite of every girlfriend I had ever had. I should have made a pass...no one had told me to fuck off in days.

I ordered a plate of the Tandoori style wings and a Corona and watched the start of the hockey game on the big screen TV they had across the far side of the bar.

I was working on dead soldier number two and the first period was ending when he finally got there. Still in the office clothes. Dark blue sports jacket. Crisp white shirt with light yellow tie. Pants that almost seemed freshly pressed. Remarkable how he could pull that off.

He worked a quick ten minute walk away. I knew there was no fucking chance he had stayed late at week's end, so I had a pretty good idea that he had had a few before coming.

Usual small talk to start. Andrew never said anything important until at least the third drink.

I had met him in university. Fifteen years ago now. He had joined the same drama club I had. Took me just a couple of meetings to realize that he was after the same woman as well.

Solely at a Liberal Arts College would you read Moliere and Arthur Miller as a way to get laid.

In the end he married Klara.

Paul, look, things between Klara and I are finished....she asked me for a divorce....

Quiet descending as the waitress came with his scotch.

A young looking pseudo-cowboy with an acoustic guitar was tuning up on stage and the business women in the dressy outfits behind him suddenly laughed loudly.

Andrew looked down, eyes averted, almost as if embarrassed.

What are you going to say?

I said what we all would say. Why? Have you tried counselling? What about the kids?

It took me awhile to ask the single question of any interest at all... what happened?

Long pause. He smiled tentatively. Knowing I didn't believe him.

An hour or so flows past. Game boring. Conversation awkward and uncomfortable. A few too many pregnant pauses. Laughter over past exploits. Stories recycled yet again.

Andrew smiles finally, sadly, small wrinkles the tiny blemishes to an otherwise handsome face. I always thought he had a bit of a Cary Grant gee-whiz quality. Infectious and effortless.

Do you remember our wedding Paul?

Yes of course I remember. I was his best man.

His folks had gone all out. Open bar, live band, late-night DJ. It was great. I danced with a cute bride's maid until 2 a.m.

Klara had looked just too beautiful.

It was time to go.

Andrew knew it. I knew it.

We paid the bill and were walking out just as the live show started.

It sounded a decent Dylan knock-off but I was tired.

Paul, was your Dad at the wedding?

My Dad had definitely not been at the wedding.

He died didn't he?

He had died. The lifetime of chain smoking had finally caught up to him.

Withered and wheezing, decrepit looking, so many tubes and a single tear falling from his left eye. Fuck I knew I should never have visited him.

We shook hands. Odd for us. He walked off, dissolving into December dark.

I seem to think it was a Tuesday that I was newly seven and sitting on her lap.

My mother, stern and silent, gazing away from me, chastising for a minor transgression.

My father pulling up in his car. Her face so very sad.

A couple days later there was Dad. Lucky Strike in hand. Holding a tea towel in Grandma's basement. Telling me she was gone.

At the house that night I knew there was something he wasn't saying. Everyone avoided me. All his friends whispered. There was an underlying sense of shame.

I had never seen my father cry.

We lived in a squat suburban bungalow and I slept in a small bedroom up at the front.

Mickey Mouse and Guy Lafleure posters. Books of one kind or another. A small radio that I listened to to go to sleep.

After Mom died I had this recurring dream where I would wake up in my bed, calling out for my father.

Jumping up from beneath sheets. The house would be empty. Every corner vacant. No furnishings.

My father would always rush in to grab me in bed screaming.

He would hug me, pull me tight to his chest, almost crushing me in his ribs.

It was five years later, I think, when I was twelve.

We were driving back from Grandma's late one night. We had eaten order-in Chinese food, but as we left the sky had turned morbid dark and brooding.

Near halfway home it had opened up in a terrible downpour.

I sat in the back of the old Cutlass Supreme as the torrents hammered harder and harder until, sideways slanting rain blurring out all visibility, my father pulled off of Dwight Ave. into the vacant parking astride the huge sidings of the soup factory.

For a few minutes we rested there. Motor idling. Bonnie Tyler on the radio.

There was no response for a moment.

My father sat, smoke pooling above his head, lingering in the near vacuum of the Cutlass interior.

When he spoke he never even looked back.

Your mother...you know no one knows what happens to people when they die. Some people think we come back again. Some think...some think that when you die...when your mother died...you go to heaven...they think she is there, safe, among the angels.

Bonnie Tyler faded to Willie Nelson. The loud horn of a fast passing truck split the cab of our car as the rain eased up enough that my father seemed ready to go.

That Mom is up there...safe...is that what you believe?

The empty air between us as the car pulled slowly away from the siding, advancing into the now gently rhythmic patter.

No
Posted by Michael Laxer at 9:01 PM