Steak Marinade for the Charcoal BBQ 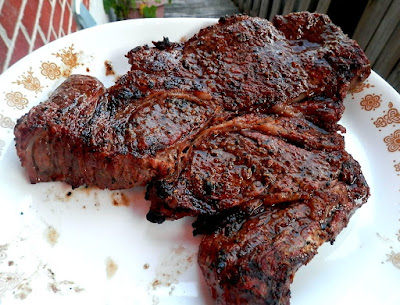 As we are all scoping out the various cuts for our weekend summer grills, in among the (especially these days) pricey T-bones and rib eyes are cuts like round, flank or those labelled as "marinating" or "simmering" steak. While often considerably less expensive, they are also a lot tougher.

Unless, of course, you marinade them!

Today we are going to take a look at a marinade for the BBQ that has very bold flavours and that, as long as you marinade it for long enough, produces a delicious and very moist steak.

This specific marinade works for any of the cuts above or similar cuts, but in the case of the steak pictured here today I lucked into two very large steaks labelled as "simmering" steak that were only about $5 each.

On the day I was going to grill them, about 4- 8 hours before grill time I took out the steaks and seasoned them liberally with sea salt and black pepper, as well as with around a teaspoon of garlic powder per steak. 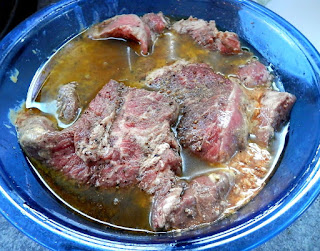 Meanwhile, in a very large bowl I mixed together the following ingredients for the marinade:


The hot sauce is not enough to make the steak spicy, but is enough to add lots of flavour!

Take the seasoned steaks and press them down into the marinade with your hands, making sure that marinade makes it around all of the beef and that it covers the steaks slightly. Add more of the marinade ingredients in similar proportions as above if more is required or if just a little more liquid is needed top up with slightly more olive oil.

Cover and put the steak in the marinade into the fridge for at least 4 and hopefully more like 8 hours.

About half and hour before you are going to grill, take the steak out in the marinade and leave it out at room temperature, covered, until you are ready to cook. 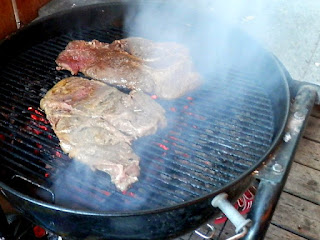 Prepare your charcoal grill (if you are a beginner and need help getting going with charcoal BBQing, see this previous post) and then toss the steaks on to cook until your desired doneness. I like steak rare to rare-medium.

Discard all of the marinade left in the bowl.

During cooking the coals may flame up due to dripping marinade, and if they do so that the steak is burning, put the lid on for a minute or two. A little charring is good, however, as it lends a nice taste and texture.

After the steaks are done, let them sit on a platter for a couple of minutes, and then, using a sharp carving knife (not serrated) cut the steaks into strips about a half inch thick. You want to cut the steaks across the grain. 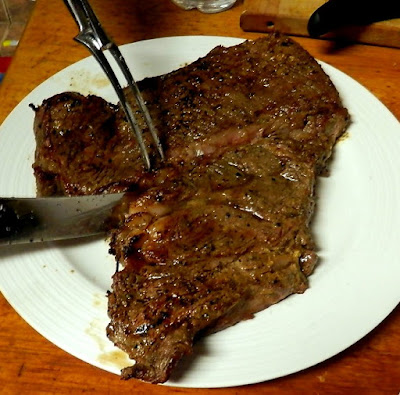 I like to serve the strips with some lemon wedges, horseradish and/or hot sauce on the side for dipping.

This is a perfect dish for a backyard party or a family summer meal. It also goes great with some BBQed corn!
\
Enjoy.

See also: BBQ Corn in the Husk with Lime and Chili Pepper Flakes

See also: Standing Prime Rib Roast done two ways: On the BBQ or in the oven with mushroom gravy

Posted by Michael Laxer at 2:41 PM