Is May about to repudiate member democracy and tank her own Green Party? 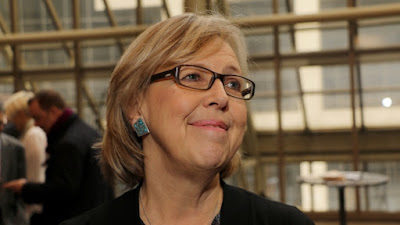 Something very troubling, it seems, is afoot in the Canadian Green Party.

A party that has long prided itself on its commitment to democracy, both internally and more broadly, appears to be approaching something of a Rubicon over the issue of Israel and the boycott, divestment and sanctions (BDS) movement that many pro-Palestinian activists support as a tactic to fight the Israeli occupation of and aggression against the Occupied Territories.

In the last election the Greens and their leader, Elizabeth May, took a very courageous stand calling for the repeal of Bill C-51 right from the start and long before the NDP finally got around to doing so.

May also said she would have voted against a parliamentary motion condemning the BDS movement on free speech grounds.

This past weekend at its convention the Green Party membership chose to support BDS and to add this support to the party platform.

This would position the party as the only major party in the country with such a stance and, more broadly, with a critical stance on Israel at all.

Remember that the supposedly left-wing NDP conducted a series of candidate purges to ensure that anyone with any seeming history of supporting the Palestinian cause was prevented from running.

In the wake of the Green Party vote, however, May has signaled that she will not abide the decision and that she is now considering her future as leader of the party.

This can only mean that she is either attempting to blackmail the membership into backing down and reversing the decision or that she is looking for an "exit strategy".

What would this "exit" consist of? One would have to assume a crossing over to the Liberal Party and a likely cabinet post (Minster of the Environment anyone?).

Either way, it is a disgraceful stance she has taken that directly repudiates party democracy and that makes a farce of her prior statements in defense of these ideas and against the types of actions taken by the NDP.

May should be deeply ashamed to have called an issue as fundamental as Palestinian human rights a "distraction" and has also made it perfectly clear that if the party wants her to continue as their only elected member and leader they have to do her bidding from here on.

The next few days will see the outcome. The Green Party will become yet another top down, undemocratic organization run by its leader and strategists or May will be gone (and likely a newly minted Liberal).

For the sake of democracy, and despite the challenges this would cause for the Green Party in the short term. if May continues in this dictatorial vein one has to hope it is the latter.

This would, without any doubt, tank the Green Party in the polls and more broadly in the short term. But, if May -- assuming that she actually has not already decided to use this an excuse to jump ship -- were to force a totally undemocratic reversal of a vote then the writing about the party's future is on the wall.

And it will be written entirely by the leader from this day forward.
Posted by Michael Laxer at 10:42 PM