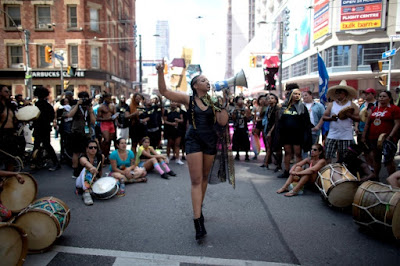 June and July saw 43 posts of various kinds on The Left Chapter.

Overall the numbers were the strongest of any two month period for the blog so far and many of the articles that did not make this round-up's list would have easily made those of a few months or a year ago.


In fact, Black Lives Matter is right -- The police are the oppressor was our most read piece so far this year and among the top three in The Left Chapter history!

Thanks to all our readers and contributors.

Here are the top seven posts in terms of hits:

1) Black Lives Matter is right -- The police are the oppressor


Canada's politicians and media have bought into a long-term project driven by right-wing notions of society and the economy that seeks to re-frame public services as "businesses" that should be run "efficiently" along the lines allegedly followed by the private sector.


3) Full austerity jacket -- The gloves come off in Tory's Toronto

With Toronto City Council's reaffirmation of its commitment to the staggeringly wasteful $3.2 billion one-stop Scarborough subway extension while also backing Mayor John Tory's plan to force all city departments and agencies to slash 2.6% in spending, the gloves have truly come off in Tory's austerity Toronto.

4) You cannot 'discriminate' against the police. They are agents of discrimination.

As the upstart and surprising Bernie Sanders campaign appears, sadly, to have lost to corporate Democrat Hillary Clinton (who I have noted in the past in anything but a left candidate), the calls for leftists and progressives in the United States to rally around her Presidential candidacy to "stop Trump" are getting louder and louder.

The past few weeks have been, to say the very least, intense in the UK.  As most of us know, following the Brexit vote, Labour Party leader Jeremy Corbyn has been facing a challenge against his leadership by key Members of Parliament, blaming Corbyn for the result of the EU referendum.  This is absurd, and it has been demonstrated that Corbyn is not responsible for the LEAVE vote winning.  Of course, for Blairites and New Labour, facts have never mattered.

Although published prior to the period the post Strongest?: Teaching Children About the Power of the People - A Vintage Soviet Children's Story got so many hits in June due to a reddit thread that it would have been second on this list had it been posted in June! It gets an honourable mention instead.

This month's top "food" post overall, and one of the most read we have ever published, was The beers of Muskoka Brewery -- Canada's first 'living wage' brewery, while the top food post that was specifically a recipe was BBQed Rainbow Trout with Herbs-de-Provence & Garlic Butter.

See also: Bernie Sanders, the Ghomeshi Verdict, the Calgary Police & more - February and March on The Left Chapter in review

Posted by Michael Laxer at 9:58 AM