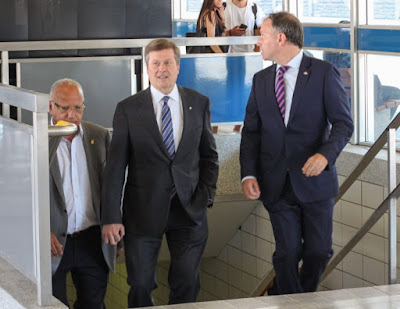 Tory Doubles Down on Austerity Dumb

Predictably it turns out that the TTC -- an overburdened system that has been chronically underfunded and underdeveloped for at least a generation and that gets far less of its revenue from government than almost any other North American mass transit system -- is having a hard time in finding 2.6% of cuts to its budget without impacting service.

In the letter obtained by the Sun, [TTC CEO] Byford says that the agency trimmed $82 million from its projected budget pressures for 2017 but still came up $149 million short.
“We’ve done everything short of impacting service,” Byford writes.


Tory, however, buys into right wing ideological myths that government is full of waste and has resorted to making cookie-cutter comparisons to other departments like the police (who have actually been chronically over-funded for a generation making the comparison inane) as well as absurd analogies like:


“I think there is more money to be found. We owe it to the taxpayers to say we have look under every cushion, under every rock to find every penny we can save and that I don’t think they have done that work yet.”...
...“Every family out there, every small business, they have to go through the same exercise, every big business does, and so I’m just saying to them (the TTC), please continue your work,” Tory added.

As if it is a certainty these savings really exist outside of Tory's imagination and as if the TTC can be likened to a household budget which as we have shown before is simply untrue and silly.

Tory's austerity vision for the city is coming into clear focus. What is also coming into focus with blanket cuts and notions of supposed "gravy trains" that cannot be found is that Tory's attachment to reality and evidence based policy making is no greater than that of his predecessor Rob Ford.

Tory and Cressy Announce Giant Park with No Funding or Timeline

Despite the aforementioned mass cuts looming over the TTC and all other city departments, Mayor Tory and Councillor Joe Cressy held a press conference to announce the city will build a gigantic new visionary elevated park that will cover the downtown rail corridor between Bathurst St and the Skydome.

Great idea. The trouble is that they made the announcement with no timeline or funding in place.

As anticipated Michael Ford cruised to an effortless and massive victory in the Ward 2 council by-election, a result that will have no impact on the balance of forces on council.

In the Ward 5 school trustee by-election, however, the result is a lot more alarming. The race to replace dedicated leftist Howard Kaplan, who sadly died earlier this year, was narrowly won by relative unknown Alexandra Lulka who is an apparent fiscal reactionary who was endorsed by Joe Oliver and who held an "intimate fundraiser" with John Baird!

This does not bode well for the orientation of the school board.

Did you know this?:

The dangerous inadequacy, inhumanity and thoughtlessness of this policy, which means that cooling centres are not opened until after three days of extreme heat, is being made all the more clear during this exceptionally hot summer that is seeing an unusual number of heat alerts.

Thanks to the actions of anti-poverty activists like Cathy Crowe some City Councillors are now looking at changing the policy so that cooling centres would open more quickly. One can only hope pressure on them will be kept up so that they take swift action on this.

In a rare moment of at least a modicum of justice, Constable James Forcillo was sentenced to six years in jail for his "attempted murder" conviction in the killing of Toronto teen Sammy Yatim on an empty Toronto streetcar in 2013.

On a less positive note, and rather predictably, he was released on bail after spending just a single night in custody pending an appeal.

Joe Fiorito in the Toronto Star: Shelter system bracing for a ‘tidal wave':


There are more than 4,000 people — men, women, boys, girls, children and families — relying on shelters every night. The shelter system is a house on fire. You can’t see the flames.
I smell smoke.

Shocking accusations of overt discrimination and racism by a Toronto bar: Toronto has had Enough of Monica’s Bar and their Racist Staff. #ShutEmDown