Bully: B'nai Brith reveals a not so pretty version of "human rights advocacy"

B'nai Brith Canada, which bills itself as an organization that does "grass-roots human rights advocacy" and as a " a lifeline for our community", recently posted a book review for Toronto Sun columnist Sue-Anne Levy's upcoming memoir Underdog: Confessions of a Right-Wing Gay Jewish Muckraker.

Leaving aside for the moment the review itself , what is particularly fascinating is what the original review said about the left-wing website, rabble.ca.

Rabble.ca, which I occasionally blog for, is a site that shares a wide array of progressive and leftist viewpoints that range from mainstream social democratic writing and NDP or labour viewpoints, to articles and blogs by writers or activists who are somewhat or well to the left of that.

It is a forum and site that is dedicated to opposing racism or racist viewpoints and this is rather easily demonstrated.

And yet the book review, written by Simon Pelsmakher, originally described rabble.ca as a "racist, white supremacist, and antisemitic website". (Screenshots of the entire original review, which is still available for now via Google cache, can be found at the end of this post)

This is an outrageous and false characterization of rabble and, by extension, makes a fairly serious implication about Uzma Shakir, "longtime Director of Equity, Diversity and Human Rights for the City of Toronto" who they note has written for rabble.

After being called on it by the website Ricochet, B'nai Brith pulled down the review for a time and replaced the original characterization of rabble with "After investigating Shakir’s background, Levy discovered that she has contributed to the website rabble.ca, which Levy calls, “a virulently anti-Israel website that strongly supports Israeli Apartheid Week and the BDS movement.”"

While B'nai Brith issued a rather tepid (given the extreme language and the nature of the accusation) apology on twitter, as of the time of this post there is no retraction, clarification or apology for the original statement on the new version of the review that has been reposted.

This type of grotesque and inflammatory rhetoric is used all too often by those who seek to conflate any opposition to the actions of the state of Israel with anti-Semitism. While this particularly vile example was (to a degree) retracted due to its total absurdity -- and quite possibly legally actionable content -- that it would have been asserted at all and posted originally is telling, dangerous and indicative of a neo-McCarthyist tactic of making extreme claims and implications about critics of Israel that has to end. 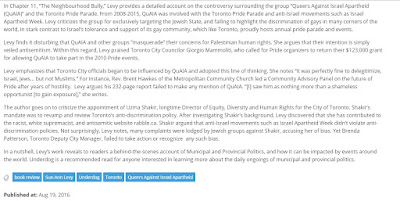 Posted by Michael Laxer at 9:16 PM