Urgent solidarity appeal in support of the WE ARE PALENQUE universal healthcare rally in Chiapas, Mexico 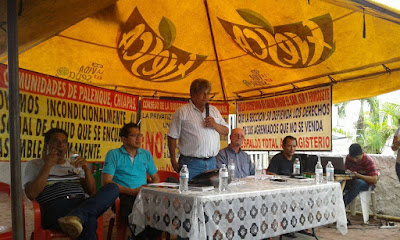 via B. Ross Ashley

I have been asked to write a note of support to the WE ARE PALENQUE rally in Chiapas, Mexico, called for Sunday. You may know that the universal healthcare system in Mexico is under attack by the Mexican federal government at the bidding of the IMF and the OECD.

Last June 22,  doctors, nurses and other healthcare workers across Mexico staged  marches, rallies and work stoppages to demand the repeal of the "Sistema  Universal de Salud" (Universal Healthcare System) -- a healthcare  privatization law enacted by the government of Enrique Peña Nieto at the  behest of the International Monetary Fund (IMF) and the Organization  for Economic Cooperation and Development (OECD).

The  mass actions were organized mainly by the #Yosoymedico17 movement.  Workers from the Mexican national public healthcare institute (IMSS),  the public sector workers' healthcare system (ISSSTE), and medical  students at the BUAP and UPAEP were in the front ranks of the  mobilizations. In many states, entire local chapters of the National  Union of Healthcare Workers (SNTSSA) went out on strike to demand the  repeal of the privatization law, the proper supply of medicines and  medical supplies to hospitals, and a host of other demands pertaining to  the union contract.

In the town of Palenque, in the state of Chiapas, the local chapter of Section 50 of the SNTSSA had been out on strike since May 23 to press for their community's healthcare demands.

Four  months after the first national day of action, the #Yosoymedico17  movement and local and statewide chapters of SNTSSA are calling for a  Second National Day of Action Against the Healthcare "Counter-reform"  Law, to be held on October 23.  They have been joined in this call by the Mexican Electrical Workers  (SME), the Political Organization of the Workers and People (OPT), and  the Nueva Central Sindical (an organizing committee for a new trade  union federation), among others.

In  the state of Chiapas, the strike initiated by the Palenque workers has  now extended to five other regions across the state: Yajalon,  Villaflores, Tonala, San Cristobal and the capital city of Tuxtla  Gutierrez. The statewide action will be held in Tuxtla, at the  initiative of the fighting chapters of Section 50. (The leadership of  Section 50, like the national leadership of the SNTSSA, has supported  the Peña Nieto counter-reform law.)

Throughout Mexico's south-east region, the protest actions on October 23 will  be held under the banner of "Todos Somos Palenque" (We Are All  Palenque) in recognition of the courageous strike -- now in its 147th  day -- waged by the 350 healthcare workers in the town and its  surrounding area.

Please send your solidarity statements to the October 23 National  Day of Action to Russell Aguilar Brindis, one of the main organizers of  the march and rally in Tuxtla Gutierrez, Chiapas. His email is javepacuay@hotmail.com.  The Tuxtla rally organizers will read aloud all statements received,  and they will forward all messages to the rally organizers in Mexico  City, so that they, too, can be read to the crowd.  They are especially  anxious to receive solidarity statements from healthcare workers and  their unions and organizations.

Please send copies of your messages to theorganizer@earthlink.net.

Many thanks, in advance, for your continued support,

This is a sample solidarity letter:

AS a health-care worker, a soldier in the service of the fight against disease and death and injury, I have always thought that those of us in the trenches were better managers of the system than our financially-oriented masters.

Since then NDP leader David Lewis forced Prime Minister Pierre Trudeau into passing the Canada Health Act in return for NDP support in the 1970s, we in Canada have had one of the strongest health and hospital care systems in North America, but we have always had to fight tooth and nail to keep it.

The fight for public healthcare here goes on, especially given the court case in British Columbia wherein a private clinic owner seeks to overturn the ban on two-tier pricing in the name of constitutional “freedom of choice” for their potential clientele of well-off patients who would be ushered to the front of the line and triaged by the size of their insurance policies and bank accounts rather than the severity of their conditions.

Our colleagues in Mexico are also fighting for the continuation of their current publicly-run health and hospitalization system. We Canadian health-care workers, physicians, nurses, service workers, stand with them.

WE, TOO, ARE PALENQUE.

Again, please send them to javepacuay@hotmail.com and c.c. to theorganizer@earthlink.net.

Do you have a left-wing event or solidarity appeal you want to share? Send them to theleftchapter@outlook.com
Posted by Michael Laxer at 4:53 PM