When it comes to 'universal' health care, it is a lot less universal than Canadians like to think 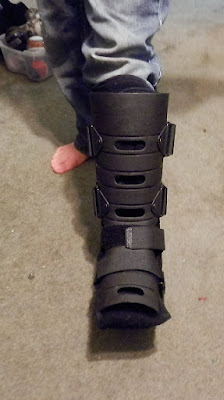 The other day one of life's unpleasant little surprises came along.

My youngest son Robert, who is nine, had his foot slip off an exercise bike at his school and the peddle came around to hit him hard in the ankle. That night it hurt a bit, but seemed ok.

The next morning as we went into school he said it was hurting more and finally said it hurt too much to walk properly and so, of course, we went up to an emergency clinic. Despite right-wing propaganda we were seen very quickly as usual. It turned out he had a fracture. The very nice specialist put him in a temporary cast and handed me the referral for an early morning appointment the next day at a fracture clinic.

And, then, the specialist said that if I wanted crutches for my son they would be $40. Now, if I had insurance I would get that $40 back (I don't) but otherwise they would send me a bill and expect a payment. Needless to say I took the crutches, as how was my son to possibly walk out of the clinic without them?

You cannot walk on a plaster cast.

The next day we went to the clinic as directed. The doctor felt that the best treatment -- apparently by far -- for the fracture was an air brace ankle boot cast that would keep his ankle safe, and then a follow up visit for more X-rays in two weeks.

Again, all of this was, of course, free, and was very fast and effective care. But as my son was being sized for the special boot, I found out that it would cost $190. Payment was expected on the way out the door. They had debit/credit card machines right on the counter.

What happens if you do not have $190 (I did have it) or insurance? Well your kid does not get the boot. Instead they would get a plaster cast that is covered but that would not be ideal and that requires crutches (which again, are NOT covered) unlike the boot.

This is one of those moments where you realize that 'universal' health care in Ontario and Canada is not as universal as we like to think.

As we all know, other than for kids, seniors and people on social assistance -- who get some coverage, sometimes, depending on various factors -- dental care (except in extreme emergency cases) and eye care is not covered by OHIP despite the essential role they play in people's physical, emotional and personal well being.

So if you are having trouble making ends meet and have eye problems or problems with your teeth, you are shit out of luck. You are going to have to either forgo proper care or have trouble paying the rent, with groceries or with the bills.

As the Association of Ontario Health Centres noted, what is "Needed: A Tommy Douglas for Dental Care". One is certainly not forthcoming including from the NDP.

But while some will try to frame these as somehow non-essential health services-- a rather bizarre claim -- there is absolutely no doubt about how essential another item that is not covered by OHIP is, that being life-saving medications.

Again, with some exceptions, other than for those who have coverage due to work or an insurance plan medicines and prescriptions are not covered by OHIP even if not taking them would lead to your death.

There are many examples of this, but one I know from personal experience. My partner has had a serious form of asthma for her entire adult life. She has to take various medications, some of which are very expensive. If she does not take these medications, she dies.

But they are not covered by OHIP at all. Not one penny.

I had a friend in Ontario who noted on Facebook at the end of last year, after having to go through surgery for cancer, that "after developing a blood clot after surgery I've been given a prescription for a month's worth of blood thinner to prevent me from dying from a heart attack or stroke. Cost? $300 - and that's after my drug plan pays 80% of the cost which means if I wasn't lucky enough to have a drug plan it would have cost over $1000!".

Note that the medicine still cost him $300. That is a lot of money, drug plan or no drug plan.

$1000 a month is inconceivable for many people.

It is a disgrace that this reality means that we do, despite our pretensions, absolutely have a two-tier medical and healthcare system in the province and country.

Unless you are either on an existing social assistance program or, in some cases, qualify for a limited mean's test driven plan, you are on your own if you are one of many, many workers who do not have a plan through their workplace or privately to cover the countless things that are a part of a healthy and fulfilling life free from what is completely unnecessary suffering or economic anxiety.

Going back to the point I began with, $190 is a lot of dough. Especially as it would be a straight up hit to your family/personal budget and as there is very good chance you would not see it coming.

I had no idea I would be parting with that kind of cash that morning.

Had I had less than that in the account, even with access to money in theory eventually my kid would have been possibly screwed for at least a day or two minimum. At the very least we would have gone through the humiliating experience of a parent and child trying to negotiate or get care that they cannot afford.

That is really, really wrong.

Luckily, due to fate, I could afford the care. But this must be beyond stressful for many people, something that again has a direct and demonstrable impact on health.

Having to use credit, borrow from family or do without other necessities to make sure your kid, yourself or your loved one gets proper care is a reality that puts the lie to some of our national myths.

And that is depressing, immoral and infuriating.