Visit the site of the most inane condo development proposal in all of Toronto!

In a city full of idiotic and inane development ideas and proposals -- many of which have been built -- and that has little issue wiping away pieces of its history, nature or common sense to allow developers to feed at the proverbial trough, today we are going to pay a visit to the site of the stupidest development proposal yet.

Nestled in between the towering condo developments all around the Humber Loop and a stretch of mansions that leads to Royal York and New Toronto, lies a stretch of Lake Shore Blvd in South Etobicoke that cuts through Mimico.

Along the waterfront here is a lovely public trail and a series of parks. Just to the north of the trail (on the south side of Lake Shore Blvd) is a stretch of medium-rise apartment buildings that provide a lot of housing. As these were built well before the era of condo mania, they are relatively low rent buildings -- some with better landlords than others -- where a lot of working people live.

Some even get a spectacular lake view from their apartments and apartment balconies.


An example is the Shoreline Towers complex that has two somewhat larger buildings that run north-south and that end with a parking lot and small green area that leads to a fence and gate that opens directly onto the waterfront trail. (2313-2323 Lake Shore Blvd. W.)

As you can see in these photos, this space is not that big. 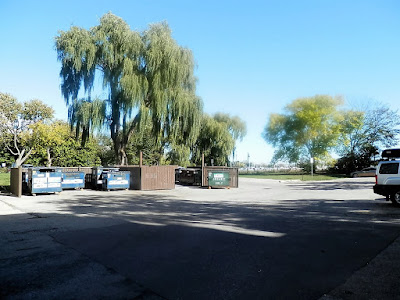 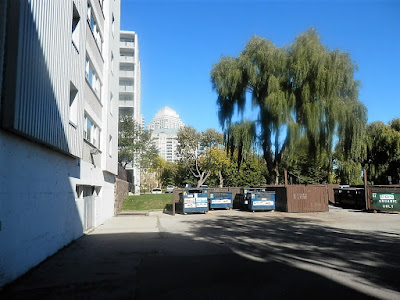 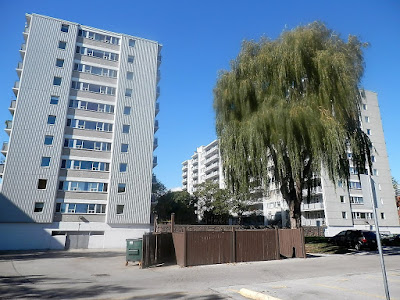 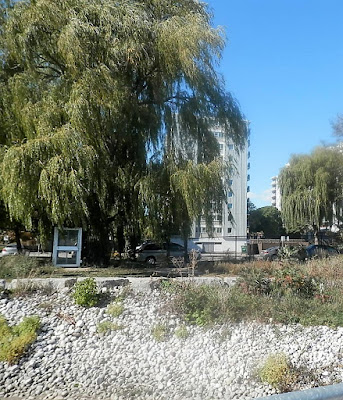 Now, developers in Toronto have long dreamed greedy drooling dreams about tearing all these apartment buildings down and thereby being able to build many, many more high-rise condo towers that would dramatically extend the wall of Humber condo buildings to the west and reap them massive profits.

The trouble, of course, are a variety of pesky laws protecting those tenants and the number of rental units available that makes such plans rather difficult to achieve.

As much as they (and some quisling wealthy community members) would like to simply bulldoze all of these working-class apartments, they can't.

But, just when all might seem lost, someone came up with the brilliant idea that if you cannot pull down a complex like the Shoreline Towers, maybe you can simply squeeze a giant condo building in behind them!

Seriously. Not making this up.

As you can see from this poster advertising an upcoming meeting around this issue, the original idea was a 25 story condo but this has been reduced to 'only' 15 stories! 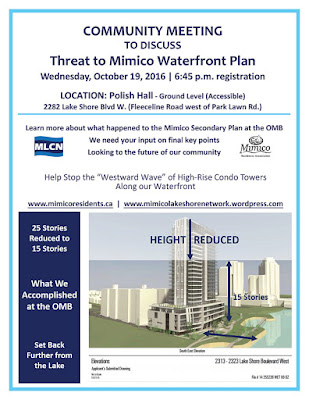 So the actual -- no joke -- plan is to build a 15 story tower right behind these apartment buildings that will front right onto a public parkland waterfront trail.

That this makes no sense in terms of traffic and parking, that it would be a disaster for the trail (especially during construction) and that it would cast the residents of the apartments into literal shadow and ruin their waterfront views matters not apparently.

However, that developers would want to build here, given the spectacular views, makes perfect sense. And to think, condo residents would tower over and be able to walk en masse out onto this public trail right at this lovely spot. 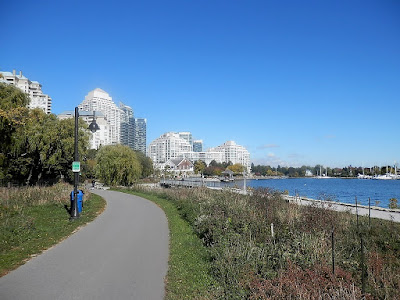 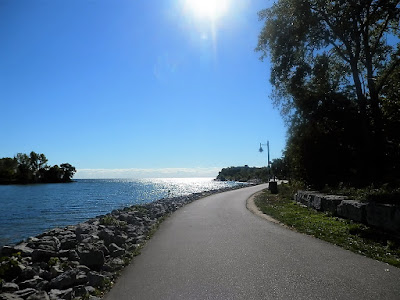 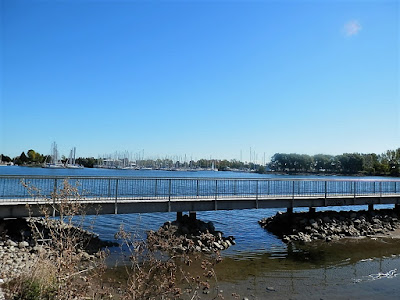 And what developers want is what really matters!

How is it even possible that this ludicrous, ugly and outrageously stupid idea can have progressed to anywhere near a planning stage at all?

How is this politically or legally possible?

If you want an idea of just how much power developers have and just how craven the politicians have been in creating a framework in which they always seem to win, it is nowhere made more clear than in this proposal.

Link to Facebook event page for a community meeting about this.

Think this is a stupid idea? Share your thoughts with Ward 6 Councillor Mark Grimes via email at councillor_grimes@toronto.ca or by phone at 416-397-9273

See also: Visiting Degrassi Junior High in Etobicoke -- Soon to be another casualty of reckless development

Posted by Michael Laxer at 2:39 PM