As "Third Way" politics suffers a huge defeat in the UK, in Canada it has now triumphed 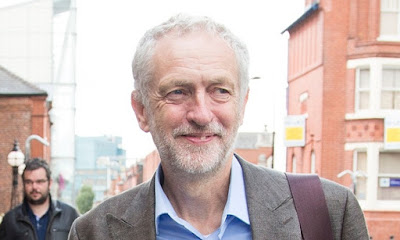 In a stunning rebuke to and repudiation of a generation of the Labour Party's leadership and its "Third Way" strategy by the party's membership, unrepentant socialist and radical Jeremy Corbyn has won the top job with a rather convincing 59% of the vote.

In the end his campaign, which at first was widely written off as a sideshow, has swept to victory and changed the political game in the United Kingdom totally.

As Adam Bienkov put it today:


As a result the Labour party is now irrevocably changed. It is no exaggeration to describe today's outcome as a revolution. The era of Blair and Brown and their followers is now well and truly over. New Labour is not just dead, but cremated and blown before the wind.

Meanwhile across the pond here in Canada the "Third Way" strategy and approach has, on the other hand, triumphed entirely. We are witnessing an election where the Liberals are actually seeking to portray themselves as to the progressive "left" of the NDP, while the NDP seeks to frame itself as fiscally responsible with right-wing narratives about "balanced budgets" that they then ludicrously attempt to claim are somehow a continuation of the spirit and politics of Tommy Douglas!

Hence today on CBC Radio we are treated to the farcical political moment that sees former Saskatchewan NDP Finance Minister Janice Mackinnon trying to celebrate and justify the total bankruptcy of the NDP campaign while Bob Rae celebrates and defends the Liberal "left shift", such as it is.

The utter emptiness of the tone of this "debate" and the very fact that it can happen at all reveals the trouble at the heart of the social democratic narrative in Canada -- that being that it has ceased to exist as a narrative in this election, and on our political landscape, at all.

The differences ideologically between the two parties have lost any meaning in a context where a radio discussion like this is even possible.

The terrible irony is that New Democrats have to turn to simply saying that the Liberals "cannot be trusted" as opposed to contrasting their own more left policies, when seeking to continue to claim that they are the "sole progressive choice".

New Democrats are, in fact, 100% correct that Trudeau is making a cynical and calculated move by supposedly shifting left, that the Liberals will, when it works for them, campaign left and then govern right. that the Liberals are promising things again that they have promised before but then delivered austerity instead. and that Trudeau's stream of progressive announcements is a political tactic and seems disingenuous.

They are correct to note that historically the Liberals have tried any number of variations of this -- but the critical difference that they do not note is that the Liberals have never before been able to do this on a federal level when the NDP had almost entirely abandoned the left political terrain.

This is the reason the Liberal "left shift" may very well work despite all of these arguments. Mulcair has shifted the tone and much of the content of the NDP campaign with such overtly reactionary nonsense that they have literally opened up this space for the Liberals themselves. It is the NDP's Third Way thinking and strategy that has allowed Trudeau to reframe the election, to revive what was a failing campaign and to show such a recent and clear rise in the polls.

They have allowed Trudeau to seem to be bearing the anti-austerity torch as absurd as that is and despite the fact that the Liberals are an inherently Third Way party.

One could, of course, also point out that there is no reason to think that Mulcair, after running from the right, will suddenly govern as a leftist. In fact, all of the evidence of recent NDP provincial regimes run by centrist NDP leaders, like those of Nova Scotia and Manitoba, would indicate the opposite.

The present Liberal reversal of fortune may not last. as there is a long way to go, but if the NDP stays on this strategic course there is every reason to suspect it will.

And calling out the Liberals as not really being on the "left" as if there is some great leftist platform on offer from the NDP is simply a transparent joke.

While it took the NDP many years to transition to a fully Blairite party in imitation of its sister party in the UK, one can only hope the road back to the left takes considerably less time than it did for Labour.

See also: It appears the NDP strategists are stuck in the 90’s – again