It's morning again in Canada: Mr. Mulcair goes to Ottawa 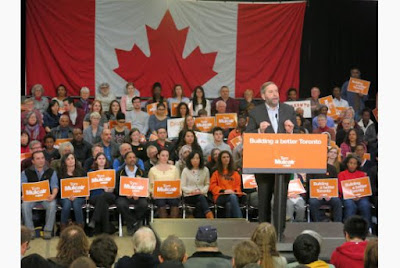 NDP leader Tom Mulcair had been on something of a roll of late.

Recently, he finally, after a period of prevarication, came out and said explicitly that if elected the NDP would repeal Bill C-51.


And as Simon Dougherty pointed out in an Open Letter to Mulcair in March, the NDP leader, while still leaving much to be desired, has taken a number of baby-steps in the right direction.

All of which makes Mulcair and the NDP's newest and latest TV and internet ad all the more unfortunate.

As the sun rises over the fine middle-class people of Canada, getting ready to happily do the work that needs doing, Tom assures them that having been "raised on middle-class values" he will bring the "change" that will help the -- wait for it -- middle-class.


In-and-of-itself saying that you will govern to help "middle-class families" represents absolutely zero change from any of the other major parties, both of which, Liberal and Conservative alike, say exactly the same thing!

In fact, the attempts of all three of the mainstream capitalist parties -- and most especially the two which claim to be "progressive" -- to fall all over each other in pandering to this appalling and facile narrative of the ubiquitous need to centre the entire Canadian political discourse around the "middle-class", whatever that is, is becoming increasingly grotesque.

Never mind that Mulcair's vision of the middle-class seems to include everyone from a barista to business owners to the leader of the Official Opposition (who makes over $200,000 a year), which would actually, were it true -- which it is not -- indicate that it is seemingly doing just fine.

The middle class it seems has really expanded in this vision and is now bigger then ever apparently. Guess all of the worry about the disappearing middle-class was misguided!

But, more significantly, what are these "middle-class" values Mulcair was raised on and now represents?

He doesn't explicitly say, but I think we can make some fairly solid educated guesses.

He does talk about how it seems to entirely consist of people who "work hard every day". I guess in Tom Mulcair's Canada those people are all middle-class -- or this is at the very least true of all of those with "middle-class values".

I guess they were raised with the wrong values.

Everyone with Mulcair's "middle-class values" would also seem to have families which, it would also appear, are the very reason they "work hard" in the first place. And, of course, the government should be there to help these middle-class families "make ends meet"!

A more bourgeois, apple-pie and white picket fence, neo-Norman Rockwell vision of the "hard-working" people of the nation would be hard to imagine, actually.

It is also, with its implied narratives, a vision with deeply reactionary underpinnings and roots.

What do "middle-class families" wish to use their alleged values of hard work to achieve?

Happy marriages in nice middle-class houses where they can raise their children one would assume.

Stripped of any policy, other than a vague promise to preserve the environment -- a promise that, given the realities and harm of patterns of personal energy and fossil fuel consumption is actually likely incompatible with a pure fixation on helping the "middle-class" "make ends meet" -- the ad has themes utterly reminiscent of any number of other campaign ads and soliloquies idealizing the alleged virtues of family and hard-work from across the spectrum .

Justin Trudeau similarly waxes poetic about hard-working "middle-class" families (although he actually manages to fit a policy idea in...though not a particularly good one):


In fact, of course, Trudeau rarely talks about anything else.

The notion of the hard-working, home-owning, middle-class family aglow with the values that embody a nation is also one of the grand ideological pillars of modern North American neo-liberal and neo-conservative politics.


Given the society and economy that these narratives have helped to create over the past generation, it is long past the time for those on the left to turn away from them.

The New Jerusalem will not be built on the allegedly middle-class "values" of "family", low taxes, low interest rates, boutique tax breaks, narrow "programs" aimed at wedge voters, petty pocketbook "populism" and total rubbish about the virtues of "hard work".

In fact, it has and will continue to die on them.
Posted by Michael Laxer at 3:28 PM