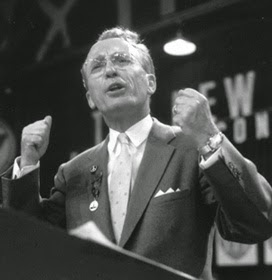 Last night, as part of our weekly tradition, my Dad and I yelled at each other about politics. The topic at hand was Bill C-51, the recent legislation put forward by Stephen Harper in an effort to “combat terrorism,” which you surely recognize as a euphemism for “destroying freedom of expression and human dignity.” Canadians of all political stripes (including many with whom I mightily disagree on other issues) have expressed their intense distaste for the bill. The arguments for opposing the bill have been well-documented elsewhere, so I won’t really speak here about the nuts and bolts of C-51. In the spirit of the oh-so-clever title of this piece, I would rather say a few words about its emotional impact.

In Nineteen Eighty-Four, O’Brien tells Winston, “If you want a picture of the future, imagine a boot stamping on a human face — forever.” These words, sadly, are coming to pass on an industrial scale. We live in a culture where certain human rights are more alienable than others. To be safe, we cannot be free – and vice versa. We live in a culture where teenagers can be incarcerated over mere accusations and wait years for due process. I’m speaking, of course, of recently released (former) Guantanamo detainee Omar Khadr. After spending over a decade in various prison cells, Khadr is finally a free man. Stephen Harper, true to form, has reacted by ramping up his thinly-veiled, dog-whistle attacks on Khadr and the entire Muslim community.

It’s all “our way of life” this and “convicted terrorist” that.  For men like Stephen Harper (and past Liberal Prime Ministers and any number of other Canadian politicians) it is not enough to lock up a young man on trumped-up charges. It is not enough for these same men to enrich their friends in the prison- and military-industrial complexes with fat contracts and kickbacks built on the blood and suffering of human beings. None of this is ever enough. The few who do manage to escape their imprisonment are to be humiliated and sacrificed on the twin altars of private profit and political orthodoxy.

Bill C-51, at its core, is an article of hatred. It is a piece of legislation based in a profound distrust and loathing of the human being. We are not the empathetic creatures that built the NHS in Britain out of the ravages of the Second World War (and Medicare here in Canada). We are not the intelligent people who created modern telecommunications. We are not the autonomous beings who question authority and join in collective action with others to make a better world. To Stephen Harper and his cohorts, we are none of these things. We are livestock to be corralled, cornered and controlled.

So what are we to do? As I wrote above, I am writing this piece fresh off of a disagreement with my father about C-51. His advice to my brother who was asking about the bill (as we were Skyping him at the time) was to "watch what you write and say online. Just assume they’re tracking you.”

I assumed years ago that they were tracking me, but this sad fact has never and will never change the things I write or say. Freedom of speech and solidarity have cost so much to so many people – people who never had the white, male, middle-class privilege that I do. First Nations activists would be the very first people targeted under C-51, as it amounts to a de facto criminalization of civil disobedience and the blocking of Canadian industry. Assuming I simply keep my mouth shut, I can continue to benefit from the violence that is enacted every day against our First Peoples. I can not and will not do this. It is morally incumbent on all of us – and most especially the privileged – to speak out and resist.

I’m reminded at this time of the October Crisis. It seemed then, to Canadians from coast to coast, that the very idea and existence of Canada were under siege by the FLQ. Prime Minister Trudeau’s response was to invoke the War Measures Act, a horrific piece of legislation that stripped Canadians of their civil liberties. The lone voice of reason in Parliament at the time was the great socialist leader Tommy Douglas.

Today, we have no Tommy Douglas (at least not in the mainstream). We have to settle for the boring neo-liberal that is Tom Mulcair who, to his great credit, has promised to repeal C-51 in its entirety should the NDP win a majority in this year’s election. I’m not a New Democrat, and haven’t been for some time, but they have my vote because of C-51. They should have yours, too.

So what’s love got to do with it? As I stated above, it’s imperative that we see Bill C-51 for what is: an article of profound human loathing. Recognizing this, we must then find ways to resist. We could start by changing our attitudes. Our culture feeds on hatred and despair, and feeds it back to us in turn. Our most popular forms of entertainment are pornography and violent movies and video games. So many of our celebrities are dim-witted, culturally illiterate buffoons whose primary function seems to be to distract people from living authentic, intelligent, engaged lives. We revel in the ritual humiliation of reality television and ambush comedy. We might benefit from taking a long, hard look at ourselves. We won’t always like what we see, but that’s not the point. By recognizing ourselves and our own potential, we would then be better equipped to see our fellow human beings not as livestock to be ruled over, but as partners and friends. Truly, I am my brother’s and sister’s keeper.

I don’t know what Canada will look like in ten years. Perhaps it will be a socialist paradise. Perhaps, instead, it will be a living nightmare -- a police state, through and through. I do fear for the future; for the world in which my children will live. But I know, from looking at the long arc of human history, that power never rests solely with men like Stephen Harper. There is great strength and courage among the rabble – the wretched of the Earth.

“Courage, my friends; ’tis not too late to build a better world.” – Tommy Douglas