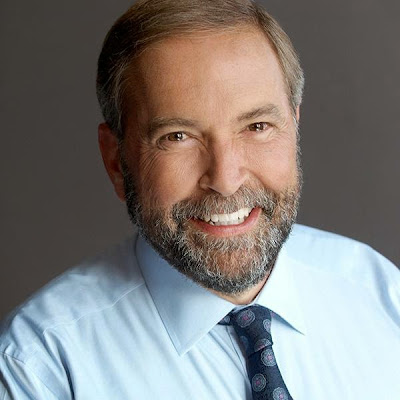 To date the story of Bill C-51 and the NDP has been one of somewhat contradictory messaging around the issue of whether or not, if elected, they would amend the bill or repeal it entirely. While some MPs said one thing to the party faithful in a variety of contexts, the leader of the party said something quite different on Global Television and these contradictions were never, until yesterday, publicly reconciled.

Some argued that this did not really matter all that much, but many activists, myself included, felt that it did and noted that the Green Party had already taken a very strong stance in favour of repealing the bill.

Happily this contradictory situation seems to finally no longer be the case, as Tom Mulcair stated publicly and clearly on twitter yesterday that an NDP government was committed to the repeal of the bill. 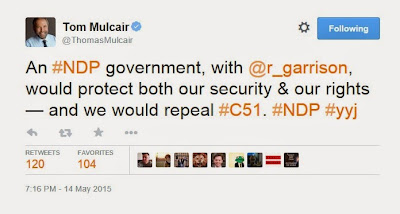 This means the NDP joins the Greens in their position on this and both stand in stark contrast to the ludicrous, bankrupt and gutless position taken by the Liberals and Justin Trudeau.

This is very good news. As I have argued in the past the importance of the Official Opposition and Canada's historic social democratic and labour aligned party taking this strong a position cannot be overstated.

However, it also clearly shows, in this increasingly blindly partisan era, the importance of any support for the parties of the "mainstream" left, or of any party for that matter, being critical support.

Not to belabour the point, but coming out clearly for the bill's repeal and using that exact language  did matter -- as is obviously the case or Mulcair would not now being saying it. Partisans of the NDP who showed up in countless threads, blogs and social media spaces to attempt to say it did not matter, or that they really had taken this position when they had not, helped delay this step on Mulcair's part, frankly, while he seemingly read the tea leaves and waited to see if public support shifted against the bill -- which it has.

It points again to the fact that uncritical support is just a free pass and is only helpful to the various party's leaders and their cliques -- not to the causes that matter to us as activists. If there was ever a case where  uncritical partisanship did more harm than good, we see one here.

It is, I think, abundantly clear that only pressure and criticism from activists both internal and external to the party, in conjunction with the shift in the polls and with the Greens outflanking him on an issue important to leftists and progressives, made this happen.

But, while this should be remembered, Tom Mulcair, finally, has made the position very, very clear and this is a really positive moment in the fight against the odious Bill C-51.

This strong stance may yet prove to be his finest moment after all!
Posted by Michael Laxer at 7:53 AM