The follies of the NDP running a right wing populist campaign 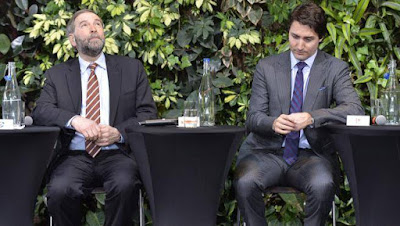 
Up until a few weeks ago, it looked like the NDP had a pretty good shot at winning the 2015 election and forming its first national government.


While a majority government is most likely out of the cards for any of the three main parties, there were strong reasons to believe the NDP could win a minority government and be supported by enough Liberal seats to stay in power for at least a few years.

After an initial bump in the polls under new leader Justin Trudeau, the Liberals had stumbled for most of this year. Trudeau has not performed strongly in the House of Commons and his bizarre notion of creating a politically independent Senate that still remains appointed by the prime minister is just plain goofy. Further, Liberal support of the Harper government’s draconian Bill C-51 which is an all out assault on civil liberties, is a major political error for a party that purports itself to be an adherent of human rights.

On the contrary, NDP Leader Thomas Mulcair is no doubt intelligent and well versed on the issues of the day. He has performed strongly in the House and time and again taken apart the Harper government on the Senate scandal, Bill C-51 and the Syrian and Iraq military missions. The NDP gained a lot of points for its principled stand against the Conservatives’ highly flawed anti-terrorism legislation, its proposal of Senate abolition is a reasonable one and call for an affordable national childcare program long overdue. The last decade of Conservative abuse of power has created a very strong anti-Harper coalition and the NDP had positioned itself strongly over the Liberals to take advantage of the majority of this coalition.

This was all until the election campaign actually began.

One would have thought the NDP strategy for the campaign would be one that makes their leader look open and accessible as a means of the public getting to know him and contrasting him to Harper. This could have been followed by a few more well thought out and moderately social democratic policy proposals to supplement the childcare plan. The overall plan should have been to try to position Mulcair and the NDP as genuine and with the best interests of all Canadians in mind with solid and defensible policy proposals that would move Canada moderately to the left. This was the strategy that was used under Jack Layton in 2011 and worked very well. It would also have positioned the party extremely well to take advantage of the soft liberal voters in the urban areas of Ontario that will determine the outcome of this election.

However, what is the campaign that the NDP has actually run thus far?

The party has decided to run a closed, scripted and for the most part right wing populist campaign since the election began. Mulcair sometimes will talk to the media but other times he won’t such as at the party’s campaign launch. Like Harper, he is choosing to attend some debates but not others. And again, like Harper, the NDP leader can’t be bothered to attend a debate on women’s issues but you better believe he will be there full force to discuss foreign policy at the right wing think tank Munk debates. The policy proposals are mostly little more than gimmicks that can easily be torn apart upon further inspection. Remind you of anyone?

Yes -- exactly -- this is the type of campaign Stephen Harper and the Conservatives like to run.

The NDP has tried to hide behind various curtains in order to justify this strange campaign strategy it is currently running on. The latest and most amusing one is that the absolute commitment to balance the first budget, as we head into an economic recession and with no knowledge of the current state of government finances-- which are likely bad -- is what Tommy Douglas would have done.

So what are the real reasons behind the NDP running a largely right wing populist campaign?

The strategy is largely based around a move to appeal to the elusive Ontario Rob Ford "swing voter".

You know, the middle aged white guy who wears a baseball cap, drinks Tim Horton’s coffee and likes Don Cherry. He lives in the suburbs and absolutely despises the Toronto “elites.” He likes to think of himself as a blue collar, hardworking type of guy. The Rob Ford voter really doesn’t care for government much at all but he pays his bills and balances his cheque book every month and believes the government should too. For the last nine years, the Rob Ford voter has voted for Stephen Harper but this time around he is very angry at the Conservatives – all the Senate scandals, poor treatment of the war veterans, the continued running of deficits, etc.

So the NDP strategy is one where they run a tightly scripted, controlled and hopefully error free campaign. Who cares about all the debates? Most voters don’t watch them anyway, except for maybe the Toronto elites, and these are not our target swing voters regardless. So, put out a few right wing populist planks to appeal to the angry Rob Ford voters and count that your base stays by holding its nose and voting NDP, as it has always done, on election day.

What about the soft liberal voters who are basically the same people as the so-called”Toronto “elites?” Well, they will certainly be horrified and see the right wing gimmicky appeals for what they are but the NDP hopes a number of these voters will see Mulcair as far more competent and prime ministerial than Trudeau and still the best option for defeating Harper. However, the NDP strategists will likely admit another group of them will probably decide to stick with the Liberals, though they probably would have done this either way.

Heck, even Mulcair’s strange adoration for Margaret Thatcher may pick up a few points with the Rob Ford voters as no doubt a number of them admire the Iron Lady. So, the NDP strategists likely weren’t too worried when this transgression, from when Mulcair was a Quebec Liberal politician, leaked out a few weeks back.

So you get all the gimmicky and mainly right wing populist policy proposals the NDP has put forward in this campaign. The NDP will fight climate change but support the oilsands at the same time. The party will put in a very minor corporate tax increase but refuse to raise taxes on the wealthy. They will raise the federal minimum wage even though this will affect almost no minimum wage workers. The NDP will balance its first budget in the midst of a recession even though they know this to be an absolute lie – whatever party is elected on Oct. 19, they will have to run a deficit in order to prevent the economy from sinking into a further recession.

What about the childcare plan? Well, you know, it will come at some point in the future but we can’t tell you exactly when. You have to understand it took the Saskatchewan CCF 20 years to bring in Medicare.

So, aside from the absolutely unethical and morally bankrupt premise of a “supposedly” social democratic party playing a right wing populist game which only further reduces public expectations of government in a desperate attempt to gain a few votes, there is another reason why this flawed strategy won’t work (some NDP partisans actually believe that the right wing populist strategy, while perhaps morally questionable, is justified by the real goal of getting elected so they can then institute some real social democratic policies that were too dangerous to talk about in the campaign. Keep dreaming folks!).

The reason this strategy won’t work is because the Rob Ford voter is more or less a myth. What is not a myth is there is a significantly large swath of blue collar voters – unionized and non-unionized – who have historically always voted Conservative and they are not going to change now regardless of what the NDP says or does. This problem has constantly plagued the party since its inception in 1961.

At the same time, the very real soft liberal Ontario voters, who had been drifting over to the NDP in the months leading up to the campaign, are now drifting back over to the Liberals as a result of the party’s recent campaign strategy and are more willing to overlook Trudeau’s Bill C-51 screw up.

As a matter of fact, a slightly different form of this campaign strategy was tried in last year’s Ontario election by the ONDP and it resulted in a third place finish and the re-election of a majority Liberal government. So, one really has to wonder why the party is trying to execute it again.

Meanwhile, with each passing day, Trudeau is gaining more confidence out on the campaign trail running a far more accessible and open campaign than Mulcair is. He is not stumbling so far as some of the NDP and Conservative strategists hoped he would. And although there are certainly times when Trudeau puts his foot in his mouth, he does have the family legacy behind him and a lot more charisma than the other two leaders.

Say what you will, but he does seem kind of genuine. Something Mulcair does not every time he speaks out of both sides of his mouth or breaks into one too many fake and wooden smiles for the cameras.

It is still early in the campaign and there are sure to be many more twists and turns. However, if the current narratives hold it could result in two scenarios very unfavourable to the NDP. If the anti-Harper vote splits fairly evenly between the NDP and Liberals by Trudeau running a far better campaign than expected and the NDP running a far worse one, the Conservatives get re-elected with a minority. Or, if the Liberals are able to pick up enough traction over this very long campaign as Trudeau continues to improve, the Liberals could get in with a minority government. In either scenario, Thomas Mulcair is the odd man out on Oct. 19.

See also: Death of a delusion: The ONDP's internal fictions and the Sudbury by-election loss

See also: The NDP and budget deficits: Not the Tommy Douglas vision

Send them to The Left Chapter via theleftchapter@outlook.com!
Posted by Michael Laxer at 10:36 AM