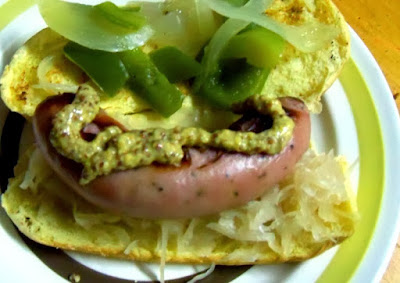 I am a huge fan of the community owned National Football League team, the Green Bay Packers. One of only two community owned professional teams in North America, it is not run by a corporation or one the many overbearing, interfering and only barely rational super rich "personalities" who "run" many other franchises...often into the ground!

Instead the Packers have several thousand owners, all of whom own a stock which gives them voting rights as shareholders. Many of them are in Wisconsin, though there are others spread around the world. The stock pays no dividends and the money raised by their issue, and by the team itself, is put back into the team. This community ownership structure, of course, is the only reason that a city the size of Green Bay has a pro team at all.

Sadly, in the NFL at least, this type of non-corporate or non-individual ownership is no longer allowed and the Packers were "grandfathered" in. They remain, however, something of a highly visible though little discussed example of how alternative ownership structures based around community instead of profit are actually possible.

Years ago, while flipping through a magazine article on "tailgating", which is essentially the practice of eating food and drinking beer in parking lots before the "big game" on Sunday, I came across a recipe for doing Brats that hailed from a Packer fan. They would make them tailgating at Lambeau Field, the storied stadium home of the team. I have long lost the article, but, this is my version of their  recipe, with a few minor modifications of my own. 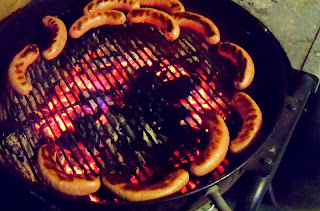 The first thing you need is to get some good German Bratwurst or Oktoberfest style pork sausages. You can use any style of thicker sausage, but these are the ones the recipe is designed for. For the portions laid out below, we did 12 sausages.

Using an indoor, or outdoor gas or charcoal (always my preferred choice as it gives them that smoky flavour) you need to grill the sausages for about 10 minutes, five a side.  You do not need to cook them fully, as this is only the first step.

Meanwhile, cut into slices a large green pepper, one large yellow hot pepper or, if you want it more mild, one large Cubanelle Pepper, (or, if unavailable use two green peppers) and two medium sized onions. 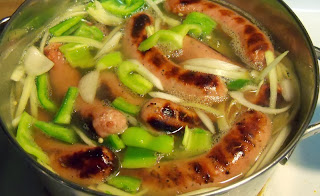 In a large pot blend together six cups of chicken stock and three cups of a lighter ale or pilsner beer. You can use any beer, but I used Kalnapilis, a somewhat lighter Lithuanian pilsner. Add the chopped vegetables to this and bring to a boil.

Add the grilled sausages to the pot and reduce to a good simmer. Simmer the whole lot, stirring occasionally, for a further twenty minutes uncovered. 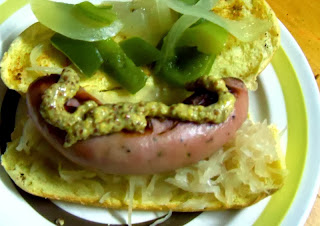 When done, serve on buns on a bed of Sauerkraut with the now wonderfully soft vegetables as toppings. Add any other toppings, of course, of your choosing. I like to add a rustic style country or Dijon mustard.

The sausages will have both a grilled aspect and an incredibly moist texture. The flavour of the brats and the vegetables are also completely transformed, in a good way, by the stock and beer.

They are really great to accompany watching a football game, or if sports are not your thing, watching whatever it is that you like to with friends or family on a fall weekend day.

See also: From Wisconsin with Love with a Beer-Cheese Soup and Fondue, the Hodag & the Packer "Crunch"! -- Vintage Cookbook TBT
Posted by Michael Laxer at 7:40 AM