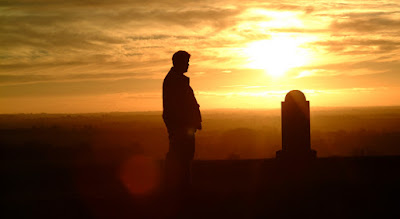 “Give sorrow words; the grief that does not speak knits up the o-er wrought heart and bids it break.”

As common an ordeal as it is, grief is a system shock. It takes over your mind and body. It will invade your dreams, keeping you from desperately-needed rest. It destroys the ability to think clearly, keeping you in a fog. Even when you think you’ve “gotten over it,” grief follows you like a shadow.

It may be weeks, months or years before you notice, but when you do, it kicks you down and your imagined progress falls apart. Grief never leaves you.

One of my co-workers (who I will call Jeff) recently lost his fiancée and partner of over ten years. One can imagine the complex set of emotions that he felt, and feels. He has not, however, been given time to process his grief. Within two weeks of the funeral, he was back at work full-time. I asked him how he was doing with everything, and if there was anything I could do to help him. He replied, “Get me the hell out of this job.” I naively asked if he would be able to take a few weeks to himself, to begin to process his grief. He replied that he couldn’t afford the time off, and in fact had already fallen behind significantly to care for his partner in her final weeks. He walked away and I knew we probably wouldn’t talk about it again.

As I was walking home that night, I nearly burst into tears at how badly life had mistreated Jeff. Here is a man who has just lost the love of his life, being forced to ignore his emotions and work for shitty pay at a shitty retail job. No financial support, no subsidized therapy – just a couple of unpaid weeks off, which actually ended up costing him several thousand dollars. I was and remain appalled at this state of affairs. In a country that prides itself on its supposed safety net, on its ability to support those in need, how can we allow the grieving to simply fall through the cracks?

What we need in this country is an official, publicly-provided bereavement support. Depending on a person’s financial circumstances, as well as unique emotional needs, support would be given for up to three years. At this point, people on bereavement support would be shown pathways to gainful employment, social support groups, and anything else they need to move forward. This support would allow grieving individuals and families access to adequate food, shelter and therapy. Again, depending on the needs and desires of each applicant, parents would be provided with no-cost childcare for as long as necessary. Under the umbrella of “bereavement,” it is absolutely vital that we include people who have experienced great trauma, and are thus exhibiting symptoms of grief (survivors of sexual assault, first responders with PTSD, to name but two examples).

If we are at all serious about building a better society, a humane world, we cannot leave our sisters and brothers to their grief. There needs to be full support, every step of the way, for anyone living with grief.

A.M. is a writer in Toronto.

Do you have a "modest proposal",  left point-of-view or opinion, a recipe or a story you want to share?

Send them to The Left Chapter via theleftchapter@outlook.com!
Posted by Michael Laxer at 8:05 AM

Email ThisBlogThis!Share to TwitterShare to FacebookShare to Pinterest
Labels: A Modest Proposal