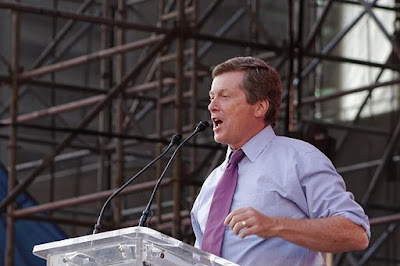 Since our last Toronto civic politics journal the city has seen the reaffirmation of the outrageously wasteful Scarborough one-stop subway plan, the consolidation of Mayor Tory's austerity agenda and a truly, deeply awful decision by the TTC board to start requiring photo IDs for children as young as ten!

These were looked at in depth in two pieces on The Left Chapter:

Full austerity jacket -- The gloves come off in Tory's Toronto

A completely peaceful and relatively brief protest by Black Lives Matter Toronto at the Pride parade led to a tidal wave of often racist backlash against the group and what were perfectly reasonable and appropriate actions to secure a set of laudable goals, including calling for an end to police floats in future.

A public anti-racism meeting with Premier Wynee and Mayor Tory in the wake of the protest saw frustration with both officials and:


But it was Tory, Toronto's blue blood mayor, who got roasted. His expressions ranged from discomfort, disinterest, and at times, irritation. One woman accused Tory of "piggybacking" on Wynne's event, before calling him "a coward," for refusing to meet with BLM in April. With his best deflection, he took the mic and said he was invited by Wynne and the provincial government. She also reminded him, to everyone's satisfaction, that he once said that white privilege doesn't exist. Near the end of the night, writer Desmond Cole questioned Tory's whereabouts when Black Lives Matter sat in front of police headquarters for two weeks in the cold. It was one of the only moments of the night that Tory got up and admitted fault.

"I should have been there," he said.

A truly offensive motion that would have seen council affirm its support for police participation in the Pride parade put forth by Councillor Di Ciano was, happily, withdrawn by him prior to being debated.

Two pieces on The Left Chapter also looked at the protest and its aftermath:

Metrolinx Takes on the City

Metrolinx has decided to take legal action over a plan by the city to allow the building of townhouses by a railway yard in Etobicoke -- a decision that was taken against the advice of the city's own planners!

We looked already at some of the back story around this, including Ward 5 Councillor Justin Di Ciano's uncomfortably close relationship with the developers who stand to benefit from council's decision.

The entire episode displays yet again that Tory's (who voted in favour of allowing the development) claims that he would be running an "evidence based" administration were total nonsense.

Two suburban Etobcioke Councillors, Ward 3's Stephen Holyday and -- you guessed it! -- Ward 5's Justin Di Ciano, are trying to resurrect the truly idiotic idea of bike licensing as a "revenue tool" for the city.

Remember that this is in a city that dispensed with the Vehicle Registration Fee directed at cars.

Toronto is easily one of the most car friendly cities in North America already, so why not bring in a bunch of bureaucratic nonsense that would be certain to get people to leave their bikes in the garage and get into their cars to go to the corner store instead?

This will also be very helpful in efforts to curb climate change which, as we all know, is caused by all those folks doing the socially and environmentally responsible thing by riding bikes. Right?

The proposal is unlikely to go anywhere, but it is sad that any Councillor would even consider it -- though not at all a shock that it would be these two leading lights who did.

A reminder as well that on July 25 there will be a City Council and two TDSB by-elections.