Solidarity with Nova Scotia's teachers -- A roundup of news and actions 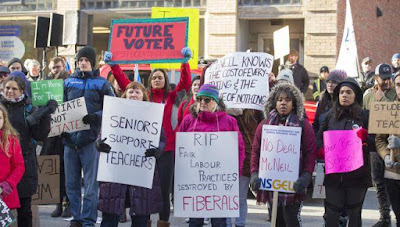 Nova Scotia's teachers and students and the Nova Scotia Teachers Union (NSTU) are under attack by the Liberal provincial government of Stephen McNeil. In a powerful act of defiance in defense of their constitutionally protected rights, the province's teachers are refusing to back down in the face of government threats and potential legislation.

Here is a round-up of what is at stake and how you can show solidarity.

As Larry Haiven outlined it in Teachers' act of civil disobedience should inspire us all:


The Nova Scotia Teachers Union has been around for over a hundred years and had never had a province wide strike in its history. Not only the premier and his cabinet, but many other Nova Scotians expected the 9,300 teachers to fold quickly and set a pattern for the other public service workers. It was not to be.
Eager to balance the provincial budget by the end of its first term, the Liberal government has declared war on labour. It introduced a spate of restrictive legislation, beginning by gutting first contract arbitration, then banning a strike by home-care workers, then imposing an essential services regime on 40,000 health and social services workers, then attempting to gerrymander health-care bargaining units (which blew up in the government’s face) and then giving universities the power to declare financial exigency and bypass collective agreement provisions. In December 2015, it introduced Bill 148, giving it the power to impose a strict limit on public-sector pay and forbidding even arbitrators from awarding more. It held and still holds that passed but unproclaimed law over the heads of 75,000 workers.
It now proposes, in a deeply arrogant, cynical and undemocratic act, to impose a collective agreement on the teachers.

Expanding on why the teachers are standing strong Solidarity Halifax has written:


Teachers are justifiably furious for several reasons.
• The conditions of teaching have become more difficult. Class size, class composition, and non-teaching duties have all changed, making greater demands on teachers. They spend more and more of their time accounting for teaching and less and less time actually teaching. Despite the scoldings of Premier McNeil and Education Minister Karen Casey, teachers point to arbitrary orders from above and changes without consultation.
• To add insult to injury, with a proposal of wage increases of 0%, 0%, 1%, 1.5% and .5% over four years, the government is effectively demanding a cut of at least 4.5% in real wages (if inflation continues to run at about 1.5% per year.)
• On top of that, the government is proposing to freeze accumulation of credits in the long service award for present teachers and eliminate it entirely for new teachers. Not only does that amount to a further real pay cut for teachers, but introduces a toxic intergenerational split among them. Far from a mere perk, the long service award was a negotiated deferment of wages, which has saved the government millions of dollars over the years.
• The government, faced with a legal dilemma, has introduced a desperate raft of legislation that is unconstitutional. The Supreme Court of Canada has given Charter protection to the right to bargain collectively and the right to strike. Governments can remove the right to strike ONLY if they substitute binding, unfettered third-party arbitration. But the government wants neither a strike nor arbitration. So it has served an illegal ultimatum on the teachers. And the teachers are pushing back.
• As the saying goes: Teachers’ working conditions are our children’s learning conditions. For years now, governments in Nova Scotia, Canada and North America have been disparaging teachers and other valuable public workers in order to lower taxes to the wealthy and devalue public programs for the rest of us.


I’m urging Premier McNeil to heed the very strong message sent by Canada’s Supreme Court last year that governments must negotiate in good faith and respect the collective bargaining process instead of trying to unilaterally strip collective agreement protections...
...In Nova Scotia, this is about the need for good faith bargaining that will result in better quality education for children. Across the country, as the Supreme Court has ruled, this is about safeguarding a basic right that levels the playing field for workers by placing checks on the power of governments, as employers, to legislate unfair agreements that tip the scales in management’s favour.

What can you do to show solidarity?

The group Students for Teachers released a public statement outlining ways that people can get involved that can be found on their Facebook page. These include emailing and calling the offices of Liberal MLAs, attending planned rallies (and one is planned for as early as tonight), emailing (Hon.Kevin.Murphy@novascotia.ca) or calling ((902) 424-5707) the office of the Speaker Kevin Murphy, as well as some other suggestions.

Please note that due to extreme weather in Halifax organizers are advising people to not take unnecessary risks to attend the rally.  Be sure to check the Facebook event page before attending for updates.


The attack on Nova Scotia’s teachers is an attack on the entire labour movement.
If Stephen McNeil can and will impose a contract on the teachers that they will not democratically ratify in a vote, they will not hesitate to do the same for any worker.
Let’s stand up this week and be clear that we will not accept this attack on Charter-protected union rights.

Update: Due to the extreme weather in Halifax, the recall of the legislature has been postponed by 24 hours until 8 p.m. Tuesday, February 14th. The rally has, correspondingly, also been postponed until 7:30 p.m. Tuesday. You can get updates on the Facebook event page.

See also: Taking on Tory's Cutbacks in Toronto -- Rally for a Fairer Budget at City Hall February 15th
Posted by Michael Laxer at 9:04 AM