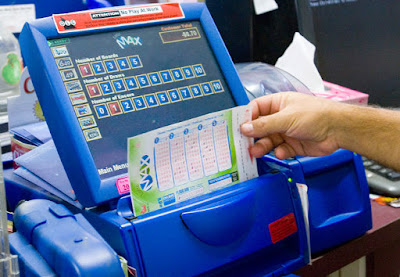 In a feeling that the vast majority of legal lottery gamblers are totally familiar with, luck has not been on the side of the Ontario Lottery and Gaming Corporation (OLG) of late.

Sales of the "big ticket" lotteries, Lotto 649 and Lotto Max, are down substantially. Down by $167.5 million or around 11%. Overall lottery sales are down by $259.7 million. It seems a combination of more winners and changing demographics have put a dent in one of the more disgraceful of government budgetary crutches.

And, while it may seem counter-intuitive to say this, that is a good thing.

One of the ways that governments in the era of permanent neo-liberal austerity have found to help finance reactionary tax cuts has been through the revenues of government run lotteries. Even with the decline of the past year the OLG generated over $2 billion for Ontario.

In fact, when one looks past the OLG and to government revenues from gambling more broadly one finds:

Gambling represents a large source of income for the Ontario government. OLG is a government-owned organization, tasked with overseeing and implementing gamblin operations in the province. The money earned by OLG is used to support a variety of provincial portfolios. OLG’s operations and revenues are organized under four business divisions: Lottery, Charitable Gaming, Resort Casinos, and Slots & Casinos. Together, these divisions generated $6.7 billion in revenue in fiscal 2011, and $6.63 billion in fiscal 2012. In fiscal 2013, the most recent year for which an annual report is available, OLG earned $6.67 billion in revenue, of which the Ontario government received $2.07 billion. Since 1975, OLG has paid nearly $40 billion to the provincial government.

But gambling is not a harmless pursuit. Many have unkindly labeled lotteries a "tax on the stupid", but that is both elitist and unfair.

Rather it is government revenue raised on many who are desperate, have serious financial issues or who have full-blown or partial addictions to gambling -- addictions that can have devastating and very real consequences.

While for most people the lottery may well be harmless fun, a report from February, 2016 issued by Ontario psychiatrists noted:

Evidence indicates that even low levels of a gambling addiction has a negative impact a person’s overall health and well-being. A study of literature surrounding the health impacts of gambling conducted by the Toronto Public Health found that a gambling addiction is associated with lower general health and well-being, chronic headaches and migraines, fatigue and sleep problems, stress, depression, anxiety and mood disorders, alcohol and drug use or addiction and suicide.

Gambling has also been associated with social problems including family-finance issues, alcohol- or fatigue-related traffic fatalities, family breakdown and divorce, domestic violence, and child poverty and neglect. Besides causing higher rates of bankruptcy, financial strain often leads to the inability to pay for essentials like housing, food, clothing, or medications.

Poverty is the most immediate concern for children living in a gambling addicted household. Other concerns include psychosocial problems, educational difficulties and an increase risk of alcohol and drug use. Alarmingly, estimates show that the number of people whose quality of life and well-being is negatively affected by a gambling addiction is three to four times higher than the rate of gambling addiction itself.


Despite this, the Ontario government's addiction to gambling money leads it to permit a situation where the OLG spends hundreds of millions of dollars marketing its various enterprises and "products" to the people of Ontario.

In fact, when from any reasonable public social policy perspective the reality that fewer young people are playing the lotteries than in the past and that they are doing so significantly less than older Ontarians is a very positive development, the OLG is actually working -- and spending your tax dollars -- to try to prevent and reverse this trend!

Disgracefully the OLG has hired consultants and made efforts to find new types of gambling and lotteries to attract the "millennial" 18-34 demographic. In spite of the fact that this is, overall, the demographic that can least afford to be throwing money away on the losing proposition that is gambling.

As just one example of how the OLG is trying to hook more people into gambling they have launched an online gambling site (where players are allowed to spend up to $9,999 a week!) and are developing a mobile app for that site so that you will be able to literally gamble anywhere at anytime.

While the debate over legal gambling generally is a complex one, what should not really be that complex is that it is grotesque that a government agency be actively promoting gambling and encouraging its spread!

Yet that is exactly what Ontario (and many other jurisdictions across North America) is doing, regardless of the social consequences and the terrible harm caused to so many people and their families that will be a direct result of this.