James Bond, Gillian Anderson and Robert Sibley -- When the myths of the past are confused for its reality 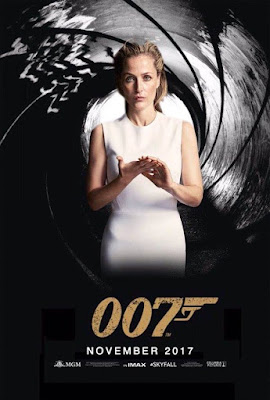 In one of the more bizarre male rants in recent memory to be published in a major newspaper, Robert Sibley took to the pages of the Ottawa Citizen to rail against the "social justice harpies" who are apparently demanding that the role of James Bond be taken over by a woman.

Sibley, it seems, is referring to the fact that an unknown person on the internet designed a meme that showed X-Files and The Fall actress Gillian Anderson with the 007 logo below. This was widely shared by many who thought that the idea was either a terrific one, or that it was at the very least kind of fun.

This is hardly a mass movement of activists mobilizing to, as Sibley put it, "emasculate" Bond!

But Sibley uses this example of the mere suggestion that perhaps an iconic male action hero should be -- as a twist to reinvigorate a franchise that really has only a very limited number of ways to remain fresh and relevant after 26 cinematic outings -- reinvented as a woman to link to what he sees as a broader campaign to destroy the "traditional manly virtues of courage, tenacity, pride and honour".

Sibley conflates the suggestion of a female Bond to the point that he says:


We should be cautious about Bond’s cinematic sex change. The symbols by which boys learn what is expected of them as adults – and what girls can expect of men – have social and political consequences. If you teach boys that chivalry is sexist, knights are patriarchist, and maidens need no protection, and that, instead, they should seek safe spaces and confess their hetero microaggressions, don’t expect them to show up when the dragons of barbarism storm the castle.

But only after stating completely speciously and ahistorically that "Never mind that historically it was mostly men who created the conditions – economic, medical, technological, philosophical and political – for women’s emancipation."

This is akin to saying that white people created the conditions that allowed for the rise of the civil rights movement or that colonialism led to the 20th Century's decolonization movements! It is a completely absurd and false contention that seeks to remove women from playing the primary role in their own and very long -- and not by any means finished -- struggle for equality and freedom.

But more broadly, his entire view of men and the male role in history is every bit as much a fantasy as the James Bond character he is charging to the barricades to preserve from the feminist hordes.

The knights of lore that he seeks to laud were, in actual fact, the incredibly vicious armed wing of the aristocratic, feudal and Christian medieval state and historically speaking bear no resemblance at all the totally false mythology that Sibley appears to think we should be teaching children.

Given the Crusades (as just one example of the violent actuality of knights historically) his choice of wording is particularly offensive.

It was the knights who were the very "dragons of barbarism" storming the proverbial castle when they were unleashed by their masters in a series of horrific and often near genocidal campaigns to wrest control of the Holy Lands from the Islamic peoples who lived there.

Sibley apparently thinks it is in the interests of education to teach historical falsehoods and that the stories like those in the pages of the Song of Roland should be accepted as historical fact!

He is a victim of his own fantasies.

James Bond, one must remind him, is not a real person and the "code of manhood" he cherishes only existed in the pages of fiction. It was not a real, actual, historical thing.

Knights, secret agents and the like were romanticized precisely as propaganda to  distort and hide the reality of what they were. Sibley, sadly for someone with a PhD., seems to think the fictions of the past represent its realities. It is a common enough error by whites and men. It allows them to look at the extreme injustices of the past through the rose-coloured lenses of a mythic time of chivalry that was never real.

There is little more reactionary than believing that the stories that were used to justify a social order based on sexism, racism, colonialism and violence were true.

Despite its ideologically shady elements, I have always been something of fan of the Bond movies. I loved Daniel Craig. He brought back a grittiness and ambiguity that the role needed and had lost. But as Judi Dench's 'M' said to another Bond, Pierce Brosnan, in Goldeneye, Bond is something of a "misogynist, sexist dinosaur" and while his character is oddly compelling I have never mistaken it for a particularly commendable or laudable one. Nor as representative of any thing other than the product of the fiction of a white male writer who created him in juxtaposition to the decline of the British Empire and the collapse of what had been a profoundly awful and violent exercise in global imperialism.

As for Gillian Anderson, no one thinks it is likely she will get the role, which is a shame. For all of Sibley's hyperbole, there is no shortage of white male action heroes. They are still the norm.

Anderson cast as Bond might do what Bond himself as a character has always done. Shake things up a bit. And that would be a good thing for both Bond and action movies generally.

Posted by Michael Laxer at 2:50 PM