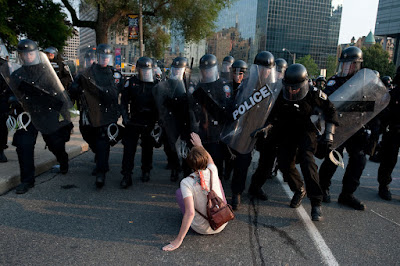 Change Coming for the Cops?

In a rare case of government downsizing and "cutbacks" that I can get behind, it appears Toronto may be on the verge of actually taking some steps for the first time in a generation towards tackling a ludicrously bloated police budget that has been padded and padded by political pandering.

A report released Thursday, that seems to have the strong backing of Mayor John Tory, has recommended a variety of measures to trim the $1 billion plus police budget including shuttering some police stations, a moratorium on hiring and promotions, stopping the bizarre and long-standing practice of paying police officers to perform tasks they are not at all needed for, and more.

It also recommended shutting down the TAVIS program that many community groups and anti-poverty groups like the Ontario Coalition Against Poverty have seen as little more than a harassment and intimidation campaign by the police against the racialized and marginalized.

All of these steps, if taken in full, would result in the liberation of $100 million from policing for other uses.

This money could be used in critical areas of social inclusion and civic infrastructure instead of, as has happened city budget after city budget, being fed into what amounts to the military wing of the austerity city.

I would suggest that these changes and attempts to divert spending from policing do not go anywhere near far enough, but they are a start.

And one can anticipate an angry, confrontational and fear-mongering campaign against even these changes from the city's police union and its political apologists on council and in the media, none of whom seem to fundamentally accept the idea of democratic and civilian oversight of the police at all.

The epic and terribly damaging farce that is the continuing derailing of transit progress in Toronto has taken yet another twisted turn with the revelation today that the one stop extension of the subway in Scarborough will cost $1 billion more than anticipated.

In other words, to build this single new stop will cost a staggering $2.9 billion.

The city has not planned for and does not have the funds in place to build both this immensely expensive small expansion and the 18-stop Eglinton E. LRT line that is envisioned to accompany it.

Yet again, absurd narratives about subways vs. LRTs driven by shortsighted political goals and a seeming complete ignorance of what LRTs are have put the city in a position where its latest subway plan is looking like the biggest white elephant since Mirabel Airport in Montreal or the Sheppard subway line a little closer to home!

Let us hope rational transit planning reverts and the city takes a look at the original 7-stop LRT plan to replace the Scarborough RT line -- a plan that would service far more people for far less money.

Jennifer Keesmaat, the chief planner for the City of Toronto made what is, by car loving Toronto standards, a rather audacious proposal in The Toronto Star when she suggested that King St, be converted, at least in parts, into a car-free zone.

Her plan is modeled on a street in Melbourne, Australia specifically, though streets like this exist around the world.

Her idea is that you block off access to King St., presumably through a large swath of the downtown, to cars and instead divide it between the streetcars, bike lanes and greatly expanded pedestrian use.

This a great idea and could be incorporated into what seems to be a slowly emerging broader push back against the car as king in the city and into a general campaign to get people to leave their cars in their driveways.

Peel Police Chief Jennifer Evans is continuing her profoundly anti-democratic attempts to resist any civilian oversight of her department.

After having essentially refused to follow the orders of her democratically elected bosses and end the racist practice of carding in Peel a few months ago, she is now denouncing attempts to "bring in an independent auditor to probe the force’s hiring and promotions practices, along with its overall equity performance" (which is apparently rather lacking) in a letter she circulated to her own force members.

This is outrageous conduct in a democratic society and utterly unacceptable from a public official who is supposed to be answerable to the public and those they elect.

She should be dismissed immediately as a reminder that we supposedly do not live in a police state.

In what should come as a surprise to absolutely no one, Supt. David (Mark) Fenton was "sentenced" to a slap on the wrist after having been found guilty of discreditable conduct for his role in the G20 police riot in 2010.

Fenton was the commander who notoriously gave the order to "kettle" hundreds of innocent civilians as well as to arrest and detain hundreds of entirely innocent people in one of the greatest mass violations of civil rights in Canadian history.

The disgraceful and frightening conduct of police in the city over the course of that weekend has led to almost no officers at any level being held to account in any meaningful way and remains a great shame and stain on both municipal and provincial politicians who failed to act to ensure that they would.

The commissioner said of one of the incidents:


The councillor’s conduct is shocking and had the cumulative effect of irreparably harming the complainant’s and her family’s trust and confidence in the councillor.
More importantly, the councillor’s actions led to a reasonable belief that the separation between elected officials and enforcement had been blurred and accordingly damaged the trust and confidence that the complainant and her family had in the institution of the City of Toronto.

Karygiannis has apologized and other than a reprimand no other action will be taken against him.

I ran for the NDP in the 2000 federal election in Karygiannis' riding (which he won re-election in easily) and I am certain that no one, at all, in the slightest, who knows anything about him is at all surprised by any of this.

Posted by Michael Laxer at 2:41 PM