What victories? -- Why the NDP's right is wrong...and DiNovo has a point! 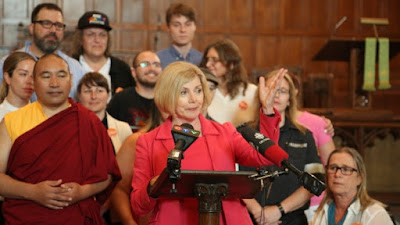 As the NDP leadership race begins what appears will be a very long campaign to pick a leader there is, to date, only one candidate for the job -- Ontario leftist MPP Cheri DiNovo.

DiNovo somewhat inauspiciously started her run by announcing herself as an "unofficial" candidate in an apparent (and totally laudable) protest against the NDP's $30,000 entry fee but has since made her campaign official. While I think it is fair to say that the strategy used here is somewhat questionable from a tactical point-of-view (her initial "unofficial" launch got dramatically more press coverage than did her later official one, for example) DiNovo in both her official and unofficial launches spoke of the need for the party to embrace a "democratic socialist" platform and and to take strong stands against systemic injustices as well as for much broader initiatives than it is at present, such as fighting for free post-secondary education.

In doing so she has framed her campaign in terms analogous to those of the very successful campaigns of Bernie Sanders in the US and Jeremy Corbyn in the UK.

While, of course, whether or not she can accomplish a similarly unexpected set of results within the deeply undemocratic structures of the NDP remains to be seen, there is little doubt that radicalism and socialist ideas seem to be mounting something of a comeback in Europe, the UK and the US.

Though you would hardly guess it from much of the reaction to DiNovo's launch from both inside and outside the NDP.

While this type of cynical "concern-trolling" from the mainstream press decrying any hint of radicalism from the NDP as inherently consigning the party to electoral oblivion is nothing new and, as I have written of in the past, has a very real ideological objective, the question also remains, if this is true about leftist principles, why would Gerson care enough to write about it? That might be because there is no better way to crush any infant radicalism before it has an opportunity to prove this wrong and to attract electoral support than to do so while it is in its cradle!

But Gerson's premise that a socialistic program and tone would be disastrous for the NDP is one that is widely shared in the party's establishment and membership itself and we have seen this not simply from the dramatic shifts to the centre by the party's federal and provincial wings, but also in such moments as Pat Martin's notorious "rusty anchor" analogy, the dropping of the word socialism from the party's preamble, the bizarre narratives that emerged in the wake of Mulcair's unexpected ouster, and in the reaction to DiNovo's announcements on various social media platforms from the usual NDP suspects.

While all these commentators -- right, liberal or centrist NDP -- take this assumption as a given and an article of faith, it is really little more than that. For, so far, there is very, very little electoral evidence to back it up.

Simply put, if centrism and abandoning "ideological purity" and socialism are the key to winning, where are all the victories?

The NDP has not had much of a winning run in the era of its great shift to "realism".

They have lost elections they should have won in British Columbia, floundered rather badly in Ontario and even worse in New Brunswick and have been unable to win again in what many see as the party's historic heartland Saskatchewan.

While Darrell Dexter did triumph in Nova Scotia in 2009, his government achieved little of any lasting importance, went down to a crushing defeat in 2013, and the party's new leader Gary Burrill, represents a marked shift back to the left.

After a generation in power in Manitoba (where Third Way governance succeeded in delivering power -- if precious little social change - under specific circumstances to which we will return) the NDP was swept out of office this year.

The NDP did, of course, win a completely unexpected historic victory in Alberta, though it did so on what is by today's standards an at least nominally left platform in tone (with calls for a $15/hr. minimum wage and taxing the wealthy, etc) under conditions of a divided right, a basically historically unimportant Liberal Party (as we will see a very important point) and generational fatigue with a Progressive Conservative Party that had simply been in power for far too long.

Those who insist that the Third Way strategy will bring success point, needless-to-say, to the federal party "winning" the role of federal opposition for the first time in its history under Layton, who despite his reputation for being on the left actually pushed the party further and further to the center in every election he was leader.

What they fail to recognizance is that this happened in a "perfect storm" context where the Liberals had their worst and ultimately least popular leader in their history and the NDP had its most charismatic. The result was personality driven and when the personalities changed, as they did in 2015, the result was ultimately catastrophic for the NDP.

Never mind that the party "won" opposition in the context of the majority election of the most right wing government in modern Canadian history leaving the NDP with far less actual political clout and power in its four years in the role than it had had in the minority Liberal and Conservative parliaments that had proceeded it.

For a strategy meant to assure victory and power, this one seems to leave quite a bit to be desired.

Third Way progressive politics emerged in the context of a UK where the two primary political rivals for power were the Conservatives and what was originally the left as embodied in the Labour Party. Liberal centrists had been squeezed out early in the 20th Century.

In other words, they emerged within a party that was already a "natural governing party". Centrist New Democrats would do well to remember that context as it is critical.

While this strand of politics did result in three consecutive neo-Thatcherite "Labour" majority governments, whatever one thinks of those governments (and the subsequent failure of New Labour to deliver much of anything electorally since 2005) they very much evolved out of that historic context.

Similarly, in Canada the only three provinces that have seen relatively successful stretches of  NDP Third Way governance, British Columbia 1991-2001, Saskatchewan 1991-2007 and Manitoba 1999-2016, all occurred within a context analogous to the United Kingdom in the sense that the NDP had prior to these points evolved into the sole alternative to the major right wing party and the sole alternative that had any chance of defeating it.

In every single province, -- outside of Quebec where there is no NDP and where the political framework is different due to the national question --  as well as federally of course, where there is already a natural centrist alternative to the right in the form of the Liberal Party, the Third Way or shift-to-centre strategy has led to only one actual election to government (Nova Scotia) since 1995.

Even in the contexts of BC and Saskatchewan, the NDP has now been out of power for 15 and 9 years respectively and both just recently lost elections again.

I think the reasons for this are both fundamental and even existential to the NDP as a party.

Socialist or social democratic politics, foundational ties to labour and a working-class viewpoint gave the NDP a reason to exist. As the ideological and serious programmatic differences between the NDP and Liberals become smaller and smaller (and insisting that your party is "more progressive" or "really progressive" is not an ideological or programmatic difference!) the raison-d'etre of the party becomes less-and-less clear and does so without having actually achieved anything meaningful electorally!

As we have seen, quite the opposite. It is a trade off with no payoff.

This makes critiques like Gerson's or the instance by NDP centrists or establishment hacks on the validity of their approach more than a little bit ironic.

So it would seem that the NDP can either hope for another historical "perfect storm" that would allow it to forever replace the Liberal Party in one or more of these provinces or federally or it can attempt to make itself relevant and an electoral force on its own terms and fighting for a serious and real alternative to mainstream capitalist politics.

Given recent evidence and the obvious shifts in attitudes politically that are occurring in countries like the US and UK, there is no reason to think that the latter has any less chance of success than the former and it has the distinct advantage of being meaningful and opening up the possibility of changing Canada's political discourse as the CCF and NDP did in the past -- which is exactly why so many on the right want to see the NDP stagnating in the swamp of the mushy middle.

In the end, when Cheri DiNovo calls for a democratic socialist NDP, despite all the inane mockery, she is calling for the only thing that may yet save the NDP from the perpetual irrelevance of trying so desperately to become something that already exists.

See also: There was no NDP Leap
Posted by Michael Laxer at 11:33 AM