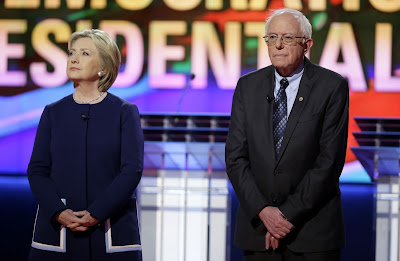 Update: On July 12, Sanders, as predicted and as he said he would, endorsed Hillary Clinton.

Largely lost in the cacophony of bewilderment and anger over Brexit was the "announcement" by Bernie Sanders that, come November, he would be voting for (and presumably supporting) Hillary Clinton for President.

Sanders framed this in "Stop Trump" terms going on to say "I think the issue right here is I'm gonna do everything I can to defeat Donald Trump," setting it up as a "strategic" vote.

While Sanders has yet to formally endorse Clinton, it is clear that he will do so, for now simply continuing the pretext that he is withholding the endorsement until he wrangles some programmatic concession or another from Clinton that he can then claim as a victory going into the convention.

This comes shortly after Sanders wrote an op-ed in the Washington Post "Here's What We Want", in which he said that his self-described "political revolution" will carry on. He outlined what this "revolution" was fighting for and it was a list of very worthy and important goals from the need for greater economic justice and equality to the importance of fundamentally changing the American criminal justice system; from campaign finance reform to taking real action to tackle climate change. And it was all very eloquently stated.

Sanders continues to campaign in the lead up to the Democratic convention saying that he is building a movement that will be centered around these goals and that will ultimately transform the United States.

How? Well that is not entirely clear. And that is because Bernie has a Hillary problem. Or, more exactly, his problem is the Democratic Party itself.

While some on the left seemed surprised or even felt betrayed by Sanders' announcement that he would vote for Clinton, they should not have been.

He has said he would support Clinton if he lost the nomination from Day One and said this, regardless of how he is framing it now, well before Trump became the Republican nominee.

The Huffington Post reported on what Sanders said about the possibility of losing the nomination as early as July, 2015:


“If it happens that I do not win that process, would I run outside of the system?” Sanders said in the interview broadcast by C-SPAN. “No, I made the promise that I would not and I will keep that promise. And the reason for that is I do not want to be responsible for electing some right-wing Republican to be president of the United States.”

The article then goes on to say Sanders would want to avoid a Nader like situation of splitting the "left" vote and perpetuates the myth that Nader in 2000 was the reason that Bush was elected.

And this has been the profound and ultimately irreconcilable contradiction that lies at the heart of the Sanders campaign.

Sanders' talk about the need for a "political revolution" to shift the balance of political power in the United States from Wall St. to the people is totally incompatible with his pledge to work within the Democratic Party and support its nominee, in this case Hillary Clinton. And this is for the simple reason that the Democratic Party is a Wall St. party and Hillary Clinton is the very personification of a Wall St. candidate.

Not only will a political revolution never emerge from the Democratic Party, the Democratic Party establishment and its elected representatives -- and Hillary Clinton included and even more than most -- will actively work to prevent any fundamental realignment of political or economic power in the United States.

While Sanders has managed to get some leftists appointed to the Democratic National Committee, and while this and his delegates at the convention may, as he seems to see as a critical objective, force the Democrats to add some more aggressively progressive planks to their "platform", this will accomplish very little once the election begins and everyone falls in line behind Clinton who will then, one can rest assured, ignore this platform entirely.

In fact, every indication is that Clinton will shift, and shift very rapidly, to the right after the convention in an attempt to attract Republicans who cannot stomach Trump.

As a Canadian I am very familiar with this path the Sanders "movement" is taking from putting real pressure on party elites only to be ultimately subsumed within and dissipated by working within a party fundamentally resistant to what he stands for. I have seen this play out over-and-over again in futile attempts to be reshape the New Democratic Party.

Those attempts at least were attempting to work within what had once been a socialist party. The Democrats have never been this. They have always been one wing of American capitalism and imperialism and the party has always accepted and even celebrated their fundamental premises.

Sanders has done many exciting and even electrifying things during the course of his campaign, many of which I have examined and celebrated on this blog. His campaign has brought socialism as an idea back into the American discourse (even if Sanders' version of socialism is not really all that socialist as many, including his ally Cornel West, have pointed out), it has energized millions of people around what is a very radical platform and set of ideas in its context, it has aired TV commercials unlike any others that have ever been seen in an American political campaign on this level, and it has been far more successful than anyone anticipated.

But all of this will have been for naught when the moment comes that Sanders folds this campaign into the Democratic Party and into that historical death knell of real leftist politics, the call to support the "lesser-evil".

And this moment is coming very shortly. Sanders has said it would from the beginning.

For all of Sanders' talk of how the "struggle continues" and how the "movement" he has created will keep mobilizing to try to change America in the days ahead, as soon as he backs the Democratic ticket and the party's various candidates in the election, that struggle and mobilization has effectively come to an end.

It can and will go nowhere within the context of the Democratic Party.

And a remarkable, historic opportunity to break with the Democrats and the politics of Wall St. and to really try to build a mass alternative to it, will have been lost.

See also: Rejecting the lesser evil -- Why you should not buy into mainstream narratives about voting

See also: There is no socialist case for supporting Hillary Clinton

See also: Rejecting a Mulcair or electing a Sanders or a Corbyn is not enough

Posted by Michael Laxer at 7:33 AM