Trump and Clinton call for more imperialist violence in the wake of Orlando...but sadly so does Sanders

In among the reactions to the horrific mass murder in Orlando -- which it seems was committed by a man with a long-standing history of violence but with no actual ties to any terrorist organization other than mentioning one in a phone call to 911 -- were some by Bernie Sanders worthy of note including:

This tweet is terrific and is totally correct in its assertion of the importance of ending the legal sale of such weapons as the AR-15 assault rifle in the United States. 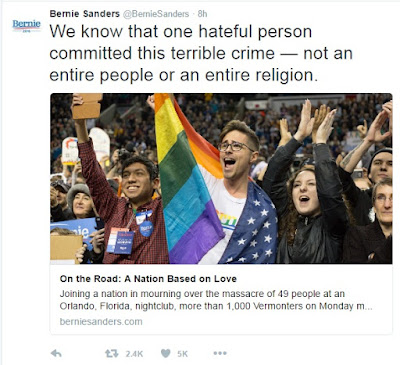 And that is an important thing to say when Donald Trump is openly using dog-whistle racist politics and Hillary Clinton panders with talk of "radical Islam". Sanders quite rightly said “Our job is not to allow politicians, Mr. Trump or anyone else, to divide us up by where our family came from, the color of our skin, our religion or our sexual orientation,”

But Sanders also tweeted this:

He said it again later at a press conference.

And that tweet and sentiment  is not just wrong-headed it is totally symptomatic of how deeply ingrained American imperialism is even among those American politicians like Sanders who have taken a more critical and isolationist view of the empire overall.

The thing is that, as despicable as ISIS is -- and it is despicable -- it actually almost certainly had exactly nothing to do with the Orlando killings other than possibly providing an excuse for its deranged perpetrator.

One might note that the United States and its adventurist interventions in the Middle East are directly responsible for the rise of ISIS. ISIS is a direct outgrowth of American attempts to "destroy" what its perceives as hindering its objectives in the region, such as the governments of Iraq, Syria and Libya.

Had the US not done this -- completely destabilizing these countries that were actually a secularist, though dictatorial, bulwark against Islamic fundamentalism -- there would be no ISIS.

More broadly though, it is ludicrous to think that a horrific homophobic hate crime directed at the LGBT community and committed by an American born extremist would have been stopped by more attempts to "destroy" ISIS. Especially given the breadth of Christian and other homophobic bigotry across the United States that has no need of ISIS to inflame hatred.

One can only assume that by saying he wants to "destroy" ISIS Sanders means he wants to escalate or maintain the bombings and intervention as both the despicable Trump and Clinton have suggested.

But as Zaid Jilani noted of those two overt imperialists in The Intercept:

Both candidates neglected to consider that no operational links between ISIS and the alleged Orlando shooter, Omar Mateen, have been discovered. While Mateen pledged allegiance to ISIS shortly before the attacks, he had reportedly previously claimed connections to two groups that oppose ISIS: the Lebanese militia group Hezbollah and al Qaeda.
And neither explained how escalating bombardments in Iraq and Syria would do anything to stop self-radicalized and/or unhinged attackers in the United States.
If ISIS is not doing anything to help coordinate or assist these sorts of mass killings, then destroying it — even if that were possible — wouldn’t make any difference.
And even if you blame ISIS for “inspiring” such attacks, the fact remains that there are any number of extremist ideologies that a deranged would-be killer could derive inspiration from — and you cannot bomb them all.

Sanders and his supporters need to remember this as well. Joining the imperialist fray in anyway on this front is a diversion from everything the Sanders campaign claims to support.

Even were it somehow possible to "destroy" ISIS and not see it replaced by another extremist organization spawned of American created imperialist chaos and mass violence, that would not tackle the real issues that produced this terrible hate crime.

And that would be because those issues were all entirely born in and bred by the USA.

See also: ISIS is not Nazi Germany and the "appeasement" argument is ludicrous

See also: Non-violence -- There is a way to stop the cycle

Posted by Michael Laxer at 8:44 PM