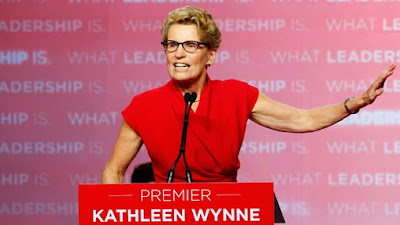 Back in 2013 when she was running for the leadership of the Ontario Liberal Party, Kathleen Wynne famously told the Toronto Star that she wanted to be known as "the social justice premier". She also said that when it came to "liberal values", "I believe social justice is what drives us".

Yet, when it comes to social assistance rates and those trying to live on them in Ontario, after 13 years in office this alleged liberal value of social justice is, to say the least, on scant display.

In fact, the Liberals in office have continued with Mike Harris' devastating war on people living in poverty that began when the Conservatives defeated the Bob Rae NDP government in 1995.

The Canadian Centre for Policy Alternatives (CCPA) released a report today that looks at the "poverty gap" for people on both Ontario Works or the Ontario Disability Support Program (ODSP). The poverty gap is "the distance between total benefit income and the poverty line".

The report found that not only had the Liberals not reversed the dramatic increase in the gap created during the Harris years, they had maintained it. When one looks at the numbers, the vicious and cruel social assistance rates that force to people to try to survive on an "income" that is as much as 60% BELOW the poverty line continues to this day and has seen no significant improvement under the Liberals or Wynne.

Overall the numbers are shocking. As the report lays out:

In fact, single people on Ontario Works only just recently began to receive as much monthly in assistance in actual dollars as they received in 1993:


At that time, a single person on social assistance received $663 a month, the equivalent of about $995 in today’s dollars.
Two decades later, in 2014, after severe welfare cuts by the former Mike Harris government and despite modest improvements to rates and other supports by the Liberals, single people on welfare received $656 in monthly Ontario Works payments and about $75 a month in Trillium benefits and federal GST credits.
Today, the maximum Ontario Works rate is $681 a month.

A government that squanders hundreds of millions on white elephant "infrastructure" initiatives for rich people, over a billion dollars on the eHealth boondoggle, that recently even handed out $32 million to IBM to fix a government software mistake that IBM itself  had made, and that has engaged in round-after-round of unnecessary "middle-class" tax cuts, has done nothing of any meaning to help the most vulnerable in the province.

This shameful situation will not be solved by pilot projects that may, a generation from now, lead to some kind of "guaranteed annual income" that may prove little more than a Trojan Horse.

We need action now. Social assistance rates well below the poverty line are grotesque and unacceptable.

The Liberals have been in power for more than long enough. And Wynne cannot use the excuse that she has only governed for a few of those years, for, as the CCPA report points out, it took the Rae government only three years to cut the poverty gap for single people on welfare from 40% to 20%.

As long as the Liberal government allows this to continue by its inaction, any pretensions by Wynne to claim to care at all about social justice remain a hollow farce.

Posted by Michael Laxer at 1:02 PM