Justin Trudeau's 'Elbowgate' and the dark side of sunny ways

Seems Trudeau’s temper tantrum not only hit a couple of people; it hit more than a few nerves.

Yes, yes, I know: He apologized a million times as per Canadian custom. There are also plenty of partisans trying to make hay of the whole thing to score political points. It’s all so “boring.” And yet, even those who are “so over it already” can’t stop talking about it. It really did hit a nerve. There must be some significance to it all if it got polite Canadians this unusually excited. I’m interested in why that is.

On the surface of it, politicians were just playing political games. Trudeau took an idea right out of Harper’s play-book and tried to ram through some legislation by limiting debate. In response, the NDP used the same delay tactics they used against Harper when Conservatives pulled the same stunt. “Childish,” say some. Maybe, though no progressives were saying that when the NDP was delaying Harper from ramming through legislation without due process. In any case, there’s nothing that justifies what happened next. Trudeau didn’t respond like a child, but like a bully. He couldn’t ram through his legislation so he took it upon himself to ram through people, swear at them, grab one colleague, and incidentally elbow another. Then a lot of Canadians responded in kind to defend the bully and reserve the bulk of backlash for the woman who got hit.

In any case, Trudeau wasn’t riding public transit – he has a chauffeur for that. He isn’t playing a contact sport. He’s not a kid in a school yard. This was the Prime Minister of Canada channeling the petulance of Jean Chretien, Rob Ford, and his father, Trudeau the First. Trudeau the Second rammed through people at work to deliver a Shawinigan Handshake to the Opposition Whip and yell “fuddle-duddle” at colleagues while elbowing a woman in the process. People have lost their jobs for less – verbal harassment without any physical contact has been enough to get people fired from six figure salaries (remember that guy at Hydro One?). There’s no excuse for any of this behaviour at a workplace, especially Parliament.

Not even the minimizing metaphors hold up. There are still “holding” and “elbowing” penalties in hockey. No one is allowed to grab and pull passengers on a crowded bus. School yard kids get suspended or expelled for bullying. Trudeau should know this already. He was a teacher, after all. But people seem to forget he was also a bouncer. Maybe what really upsets his defenders is that he acted more like a bull in a china shop than someone teaching the sunny ways of democracy.

The illusion is over. The sun has set. It’s clear for all who didn’t know already that our PM has a stormy side. He thundered across the floor and shocked more than a few MPs. He made it strikingly obvious to the nation that no amount of personal branding hides the fact that he has a bullying side. He needs to deal with his rage. And since he’s our Prime Minister, we also need to deal with him.

But he said “sorry.” Yeah, he also said “sorry” the morning before the incident. Heck, even Stephen Harper got emotional and said “sorry” to First Nations in an even more epic and widely televised apology.

What do any of these apologies mean if Prime Ministers can try to ram through legislation – physically now – without respect for democratic debate?

These things are just so “boring,” ammiright?

Apparently, we should just “get over it” because the PM’s not “intentionally” hurting anyone. A charming teacher would never do anything harmful on purpose because he’s Just So Nice.

Or, maybe, the former bouncer can be a bit of a bully sometimes. Maybe that’s why he rams through people and policies, and doesn’t care who gets hurt in the process – the apologies only come after when his image is at stake. But now that more of us know he has a bullying side, maybe we won’t wait for a future Prime Minister to say “sorry” for trampling over human rights, workers, and the environment. Maybe more people will do something about it now. Maybe that’s what’s at stake beneath it all, and why Trudeau’s bulldozing contempt for democracy actually matters. 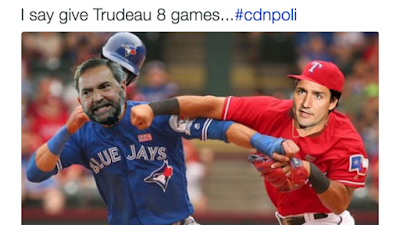 This post first appeared on the new leftist online blog & forum whatisleftdotnet  and is reprinted here with permission.

Simon Dougherty is a former NDP candidate from Scarborough, Ontario. The son of Irish and Slovenian immigrants, he worked in trades and senior care like his parents, and then in education before graduating from York University. Simon has also done work in community organizing and videography. He is currently conducting doctoral research at ACU’s Institute for Social Justice in Sydney, Australia.

See also: At what cost power -- Whither the NDP & Leap?

Posted by Michael Laxer at 6:18 AM