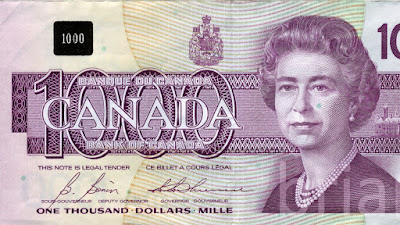 Excited about the possibilities that the upcoming NDP leadership race might allow?

Wondering if an insurgent campaign might arise and if an outsider or unexpected candidate might lead to something akin to what happened with Corbyn in the Labour Party?

Given the interesting left shifts we are seeing and the unanticipated socialist moment that has arisen in North America due to the Sanders campaign in the US and given the repudiation of the establishment by the ouster of Mulcair as leader one would have every right to think that maybe, just maybe, now was finally the time where something might occur to shake up the deadening centrist rot that has been eating away at the NDP.

That just got a lot less likely.


In order to run, Candidates will be required to provide a registration fee of $30,000.   The spending limit has been established at $1.5 million. Administration fees of 25% will be levied on all monetary donations.

That's right. In order to even run at all a candidate will have to pony up $30,000 just to get in the door.

One could make a very strong argument that monetary barriers to running for a position of any kind in a party that claims to be the "real progressive" alternative to the Liberals, that occasionally purports to represent working people and to be opposed to inequality and that from time to time will claim to care about systemic injustices, runs deeply counter to the entire project and purpose of the party itself!

But a fee this high -- double what it was just four years ago in the last leadership contest -- makes it very likely that only MPs, MLAs or MPPs, candidates with serious establishment or labour leadership backing or the independently wealthy will be able to afford to even try to mount a campaign.

This makes a farce of pretensions of party democracy and ensures the stifling of diverse, radical or insurgent voices.

Its aim is directly to limit the race to those the party insiders see as "serious" candidates and to minimize the possibility that someone, or a variety of candidates, might somehow "embarrass" the party or distract from those campaigns the party wants to see.

It is entirely in-line with other efforts, often rather Orwellian, to limit what members can actually run for or for them to have a meaningful voice within the party.

Just when change seems to be in the air, the NDP shows that it is intent on more of the same old story and song that led them to where they are now.

See also: Fred Checkers and the state of democracy in the NDP

See also: There was no NDP Leap
Posted by Michael Laxer at 12:44 PM

Email ThisBlogThis!Share to TwitterShare to FacebookShare to Pinterest
Labels: NDP