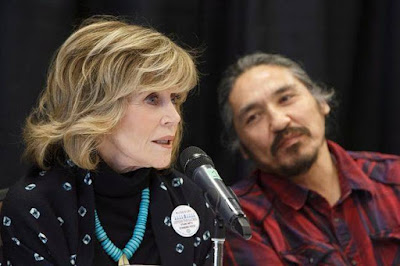 So, Brian Mason, Alberta's Minister of Transportation and of Infrastructure and the MLA for Edmonton Highlands-Norwood, and Tim Moen, Leader of the Libertarian Party of Canada, among others, agree.

Hollywood elitist Jane Fonda should go back to her own country and shut up until every problem in the US has been solved!

Fonda, of course, had the nerve to come to Canada and tell us that we shouldn't be fooled by “good-looking liberals” like Justin Trudeau who talk out of one side of their mouths about climate change while approving pipelines out of the other.

That Trudeau is a "good looking" liberal who talks the talk without walking the walk would not exactly be controversial on the left if we did not have an NDP government in Alberta that desperately wants to see some pipelines built!

Suddenly he is a paragon of righteousness and virtue now that he is building a pipeline Notley and company want.

No hypocrisy there right?

Instead of embracing and celebrating what Jane Fonda had to say -- which had the virtue of being both accurate and a totally fair critique made by a prominent activist around a number of important causes for decades -- for some on Canada's "left" it was time to indulge in and embrace a variety of right wing tropes about "Hollywood elites" and blah, blah, blah, blah whatever other right wing garbage comes spewing out.

This predictably attracted a variety of reactionary comments on his page including from folks insulting her with the vile term "Hanoi Jane" in reference to her incredibly courageous stand against the American imperialist war in Vietnam at the time it was happening and her visit to North Vietnam in 1972. (His post was also criticized by many who pointed out in the comments how right wing it sounded).  Mason had left these comments up and had not, at the time of this posting, challenged them in anyway.

Here is one example:

One might note that the NDP also strongly opposed the war in Vietnam in the 60s and 70s, but, of course, the NDP was made of stronger stuff then. I guess Fonda was just "high or mentally disturbed" at the time.

Fonda showed far more courage when she stood in solidarity with the Vietnamese people in Hanoi than we could ever expect to see a fraction of from an NDP elected representative these days on any level.

Needless to say, the sentiments expressed in Mason's comment were also reflected by such luminaries as Tim Moen, Leader of the Libertarian Party of Canada who wrote a mindbogglingly silly piece that basically says what Mason said but in more crass terms implying that no one anywhere should be allowed to make any comment of any kind about anything outside of their own country unless they have solved every issue that exists in their own country first!

This is hilariously imbecilic coming from anyone on the right who would never apply it to those on their own side of the spectrum.

The right has not been shy about making sweeping generalizations about the politics of other countries and Tim Moen, despite his article, could not care less about the issues he raises in his piece that he paints as exposing Fonda's hypocrisy, despite the fact that she has actually long been an activist around these and other causes in the US as well and often a critic of her own government.

She is not the hypocrite here at all. But some on Mason's wall just love how the right and "left" seem to be coming together over this:

And so they should. Because they are uniting on this one.

No one is doing more harm to the left than those like Mason who embrace the most backward and reactionary of tropes just like some did in Ontario around the road toll issue.

Fonda not only has the right to speak her mind in whatever country she chooses she is one hundred percent correct about Trudeau and the pipeline issue more broadly. The only hypocrites are "progressives" who pay lip service to climate change while backing and enacting policy that will exacerbate it.

The air of unreality around issues of climate change has never been greater on the Canadian left. And as if this was not bad enough celebrating right wing rhetoric about supposedly clueless elites trying to kill jobs in an industry that is killing us all is not just straight out of the Republican playbook, it is a grotesque kind of vilification of people trying to prevent an unfolding environmental catastrophe.

One that Canadian leftists, including in the NDP, used to universally admit was real.

See also: What is with all the Ontario left ranting about road tolls and Toronto 'elites'?

See also: The threat of climate change is immediate and real -- Ending 'car culture' is a key part of combating it

Posted by Michael Laxer at 9:51 PM