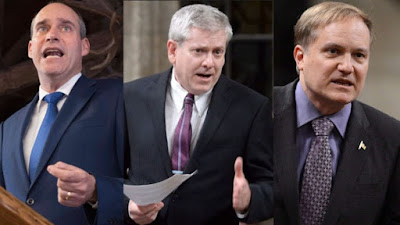 After a long period in which it almost seemed no one wanted the job, the NDP leadership campaign has begun in earnest with three candidates -- Peter Julian, Guy Caron and Charlie Angus -- having thrown their hats into the proverbial ring.


The delay is hardly surprising given that the party placed a steep monetary barrier in the way of running (presumably to keep out the radicals and the riff-riff and to limit the field only to the kinds of "serious" candidates that the party elite want to see) and that the new leader will face some real challenges in the wake of the party having squandered an historic opportunity under the leadership of Tom Mulcair.

The delay went on for so long that some in the party actually started organizing to try to persuade Tom Mulcair to try to return to the post, an inane idea from a strategic standpoint that, were it to come to pass, would relegate the NDP to total irrelevance.

That seems to have gone nowhere, but "modernizers" Layton and Mulcair have left a legacy that a new leader must confront. Intoxicated by the whiff and potential of power they took the party further towards than the center than it has ever gone. While those who wish to canonize Layton are loathe to admit this, the centrist strategy was one that he somewhat unexpectedly but entirely wholeheartedly embraced (Mulcair's rise in the NDP, it must be remembered, occurred in no small part because of Layton) and while it appeared to be vindicated in 2011 when the NDP became the Official Opposition for the first time in its history, it came crashing down when the party was dealt a devastating defeat in 2015 that ended with it back to its 'traditional' third-party role.

As we have noted at some length in several previous articles by different writers on The Left Chapter, Mulcair's strategy allowed the party to be outmaneuvered rhetorically on the "left" (one must use the term rather loosely here) by the Trudeau Liberals. [ See: "The follies of the NDP running a right wing populist campaign", "Delusion continues to rule the day in Mulcair NDP",  "Game Over -- Turns out Mulcair is simply wrong about even today's NDP and deficits", "The NDP's phony “credit card” analogy: a neoliberal conception of the public household" and "Catastrophe: The NDP lost because it deserved to" among many others ]. The slow-motion catastrophe of the NDP's 2015 campaign was one we chronicled as it unfolded, correctly warning that it was both foolhardy and was likely to end badly.

In the end the Layton/Mulcair goal of trying to squeeze out the Liberals led to the reverse and it was the NDP that was squeezed out. The inherent danger when your approach is lacking in principle or depth is that another approach that appears to have more of those two things, however cynical, can easily derail yours.

The Layton/Mulcair strategy's failure not only means that the contenders are no longer vying for the leadership of a party that appears to be on the cusp of power, but also that clearly a new direction and tone is in order and they will have to decide to what degree to embrace this reality and what this new direction will look like. For the first three open contenders they will also have to do this somewhat cautiously as they all were loyal members of Mulcair's caucus and (at least publicly) were uncritical supporters of the strategy in the lead up to the 2015 debacle.

For the first time since the 90s the party is back to having to try to understand and to some extent to justify why it even exists. Some will insist that the party can do this simply by holding the Liberal's feet to the fire over predictable broken promises or the fact that any progress that has occurred under them has been more rhetorical than actual. But somehow it seems unlikely that trying to present one-selves as the more honest, efficient and 'progressive' liberals will be enough to fire the imaginations of Canadians and to make the NDP a contender or, at the very least, to make what it is fighting for inspiring and important.

On can anticipate that many of the candidates will tack left and attempt to distance themselves from the past approach.

Of the three candidates who have so far come forward it would seem that BC MP Peter Julian has the longest road to travel on this front should he wish to. Julian was a Mulcair loyalist even after the election and has in the past come off as cautious and moderate. He launched his campaign by promising to fight to eliminate all tuition fees for post-secondary education and took a stance on pipelines that, on that issue at least, would place him on the party's left. His website, while at this stage short on particulars, has pages like "Climate Change is Real", "We are the 99%" and "On Native Land" that are obviously trying to frame his bid in certain terms.

Caron can be anticipated to present himself as the candidate to preserve what is left of and to recapture the party's dramatic inroads in Quebec that were made in 2011. He launched with a promise to work for a universal basic minimum income as his central plank, a policy that is increasingly embraced by liberals and even old-style conservatives and that is hardly radical anymore. He also at his launch emphasized the importance of being "credible" on economics which has long been code among social democrats for avoiding anything terribly left-wing! His website frames him as a policy wonk (it even says at one point "Opposition must come with rigorous proposition"!) and experienced. It is likely that he will try to represent some of the forces of continuity within the party.

Angus, on the other hand, came out of the gate trying to capture some of the alleged political populism that is supposedly in the air and talked about how politicians like Trump and O'Leary can only successfully channel populist narratives when parties like the NDP "fail in our job to stand up for working class people.” Despite having been in parliament for well over a decade, Angus in an interview with The Canadian Press also tried to emphasize the populist theme by saying he eschewed the "fancy functions" in Ottawa and "I come from a real place, I speak about real issues and I stay out of all the silly stuff.'" According to the Toronto Star "Indigenous issues will also be central to his leadership campaign" and there is no reason to doubt this given his impressive record and passionate advocacy of this critical front.

At the same time, however, he signaled that he would not call for a pipeline moratorium saying "We don’t throw a generation of workers under the bus to make a political point" which was perhaps unfortunately phrased as there is a lot more at stake in the struggle to shift our society away from fossil fuel consumption and to combat the incredible and even existential peril we face from climate change than simply a "political point".

His "Got Your Back" slogan is a clever mix of the folksy with a leftist tone. Angus, at least on some level, seems to wish to be seen as Canada's "Bernie Sanders" (he re-tweeted an Huffington Post article from late last year saying that he could be this just a couple of days ago) though presumably a Bernie Sanders who delivers a different outcome given that Sanders actually lost.

There are at least a couple more candidates who may yet emerge.

It is increasingly certain that Niki Ashton will enter the race as soon as next week and I think it likely she will adopt a left tone and stance within the field. Some leftists within the NDP have been waging a very public campaign (they even posted a website that was kind enough to outline what his platform could be if he steps forward!) to recruit former OFL leader Sid Ryan to run. While Ryan has only flirted with the idea to date, he has at least mused about the possibility. He would presumably add an explicitly anti-capitalist voice to the contest. Ontario MPP Jagmeet Singh is also considered a possible candidate and is widely regarded as an immediate front-runner if he chooses to run.

It seems the lines of battle are finally being drawn up and that the issues and themes that the campaign will be fought around will be coming into clearer focus very shortly.

See also: Cardy, Smokey and a serving of New Year's whine -- Right wing 'progressives' ring in 2017 on a sour note