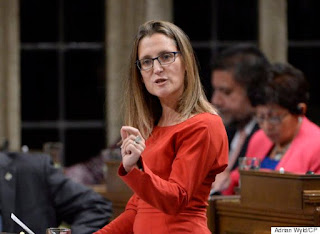 The sins of the mother or father, grandmother or grandfather, should never be held against the child...unless they then appear to lie about and celebrate those sins.

And that is exactly what Foreign Affairs minister Chrystia Freeland did when she not only claimed that her grandfather was not a Nazi collaborator and seems to have lied that it was all a Russian fabrication but when she celebrated him as a fighter for "freedom and democracy", which as a Nazi collaborator he was not!

This is sick and disgusting. It is actually hard to believe she is still in cabinet or even the Liberal caucus after this disgrace so, in case anyone has any doubts let us lay it out in clear terms: 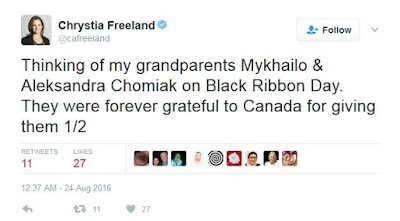 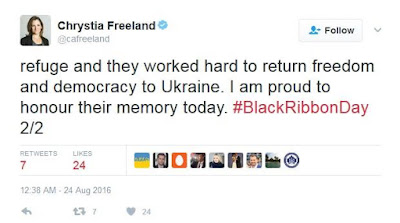 Seriously. This all happened.

She might as well have flown to Babi Yar and spit on the memorial there.

There is no excuse for this and no possible way to justify knowingly saying that your Nazi collaborating grandfather was dedicated to "freedom and democracy" in a nation  where the Nazis killed millions of people and exterminated the Jewish population while he actively worked to support the Nazi invaders.

Shame on Freeland for this. Shame on Ukrainian nationalists for lying about the past. Shame on the Trudeau government for supporting someone whose actions seem to show her as an apologist for genocide in the Ukraine.

She should either resign or be dismissed now.