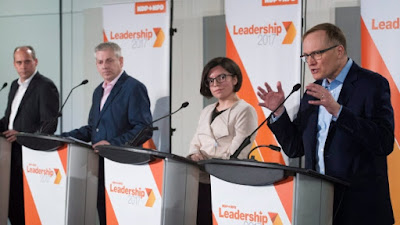 The second debate in the NDP's leadership campaign was, thankfully, a more spirited affair than the first one, although it really had nowhere to go but up.

While the format was still constricting and many of the questions tended towards issues on which all of the candidates would largely agree, in this instance they far more clearly strove to differentiate themselves from each other. All were also significantly stronger in their delivery.

This debate, held in Montreal, was intended to be centered around youth issues and was for the most part successful in this. There was a lot of discussion around student debt, precarious work, social movements and issues likely perceived as being of greater significance to younger New Democrats and voters such as the legalization of marijuana (although how accurate this assumption is could be open to some debate as well).

On that issue there was little discord with every candidate supporting the liberalization of laws and decrying the lack of movement to date on the part of the Trudeau government on its election promises. Guy Caron still managed to play the policy wonk stiff by emphasizing the economic benefits of ending prohibition while Charlie Angus likely scored some points with his more lighthearted and humorous comments about having been in a band and the clouds of smoke that were evidently a regular feature of that.

But while some obvious and predictable areas of concurrence remained, the constant attempts to pat each other on the back and to be the first to say how much they agreed with everyone else that ran through the previous engagement were, mercifully, dispensed with.

On taxation they all seemed rather muddled with musings about lowering the small business tax rate (not a good idea), raising corporate taxes (far less effective on its own than many social democrats seem to think) and that old catchall of "closing loopholes". But not a single one of them touched on the idea of raising personal income taxes even on the wealthy. This is a serious oversight that deeply undermines any commitment to fighting the growth in inequality which has been directly fueled by a generation of personal income tax cuts that have overwhelmingly benefited the well-to-do the most.

In some areas clear battlelines are being drawn. The most obvious of these is on pipelines. In the section of the debate centered around climate change Peter Julian, as he has from the start, took a clear stance against them while Niki Ashton strengthened her line and seemed to essentially rule out new pipelines as well. Angus used the climate change section to praise the NDP Notley Alberta government's record (without, of course, pointing out Notley's very harmonious relationship with Justin Trudeau on pipelines) which would seem to indicate, as he has previously, that he is staking out the most pro-Alberta, pro-pipeline, pro-resource economy position. Caron, meanwhile, had one of the more unexpected ideas of the afternoon when proposing that the government possibly get into the business of developing electric cars.

Caron, oddly, seemed often to lack policy depth as when he kept hearkening back to his universal basic income proposal as some kind of panacea even when this was silly or fanciful. Caron's notion that a basic income would help young people to seriously confront student debt loads or with housing issues is a real stretch. A basic waged income certainly does not do that for working people now and basic income schemes are not a substitute for debt relief or a plan to eliminate tuition fees.

Angus came out more forcefully than in the first debate and remained so throughout. He has recently pledged to make First Nations issues central to his campaign and was at his best when hammering at the Trudeau government for having not just failed to live up to their promises to First Nations but for continuing with corporate giveaways while young people in First Nations communities face severe systemic injustices. When he spoke of how the NDP's role was not to be the conscience of the Liberals but rather to win power to deliver a government that would have the people's "back" it was almost stirring.

Overall though Angus continues to appear to be depending on his personality and the notion among many that he is a fighter to pull him through. How long he can bank on this without a coherent overarching narrative to his campaign remains to be seen, and he did have some notably weak moments such as when the debate turned to deficits and stimulus spending and in his odd answer on electoral reform.

Julian was something of a surprise and adopted a tone notably more to the left than he has in the past. His opening and closing statements were well delivered as was his call for the NDP to be a clear and bold left alternative and movement. This rhetorical shift may reflect a sense that, given his pipeline stance, his campaign feels it may be competing more for the votes of those who might be inclined to support Ashton (or Sid Ryan) than was originally anticipated.

Ahston delivered an all round solid performance both within the terms of the debate and in keeping to her message. She spoke of how this generation of youth is the first that risks being worse off than their parents and of the importance of turning the tide on neo-liberalism by fighting against privatization and for an expansion of social programs in areas like pharmacare and dental care.

When the question turned to social movements like Idle No More and Black Lives Matter Ashton talked of the need for genuine engagement, solidarity and respect and, again, of how fundamental they were to her perspective. Given that she has been the target of some rather unfair and reactionary criticism on this front of late, this showed resolve and principle.

She had another very strong moment when speaking of the need for democratic reform and greater diversity within the party itself, of how disappointed she was to see candidates in the last election having their nominations revoked over issues like the Israel - Palestine conflict, and of the NDP's "need to be proud to be a left party".

While there were still a couple of silly distractions like asking what the candidates views on pineapple on pizza were (and, disappointingly, not a single one of them was willing to take the proper position that there is no place for pineapple on pizza outside of the worst food philistinism, but I digress) this was a more compelling and interesting debate while still lacking in any real back-and-forth.

Overall, Ashton seemed the likely winner both in her delivery and by presenting a consistently coherent campaign narrative, though both Angus and Julian had their moments and were in better form versus the first go-round.

See also: The NDP's leadership debate begins not with a bang but a miserable whimper

See also: No, it is not a good thing if 4 NDP MPs all pat themselves and the party on the back in a leadership "debate"

Posted by Michael Laxer at 8:44 AM