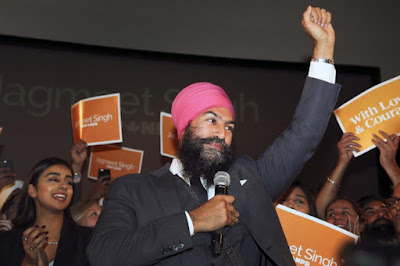 It is often worth waiting to see the narratives that emerge in the days following a vote such as this one and these have varied from the predictable to the farcical.

Predictably the party pundits and establishment -- as well as, significantly, a variety of right wing or liberal media commentators outside of the party -- have embraced Singh's victory as the dawn of a new era of leadership that will be aimed at electorally besting Trudeau and that rejects any silly notions of radicalism or leftism.

Of course, the very same people also embraced Mulcair's victory in exactly the same way in the 2012 leadership contest.

Singh is regularly framed as a serious contender against Trudeau not due to his polices but due to his perceived charisma, good looks and even his hair. This is par for the course in a neoliberal politics that infantilizes voters and that intentionally seeks to dumb down the discourse and minimize differences between the parties.

As I have noted before, it is no mystery why the mainstream media to a degree celebrates folks within the NDP like Singh and Mulcair as they represent a non-threatening, centrist oriented version of "social democracy". If there is no real left, there is no real left and there is nothing that makes the notion that truly anti-capitalist or socialist ideas are absurd or not to be taken seriously more creditable then when what used to be a socialist party itself repudiates these ideas.

New Democrats and "progressives" should stop feigning surprise when the mainstream media casts a spotlight on politicians in the NDP like Singh. It makes perfect sense that they would.

The NDP's marginalized left supporters were reduced to trying to claim a "moral" victory that is not at all readily apparent to anyone who is not looking to desperately seek out any reason at all why socialist or anti-capitalist activists should continue to support or work within a party that would have been best abandoned a generation ago.

The line that emerged from this quarter was not that the leadership results showed yet again the futility of trying to shift the party left -- a tactic that has failed for over 40 years with ever decreasing results -- but rather that somehow the "left" and the candidacy of Niki Ashton had pushed all the candidates to take more socialistic positions in the wake of the ouster of Mulcair.

But this position is silly and simply ignores the fact that events both outside the NDP and outside of Canada played a far greater role in what little ramping up of the left rhetoric that there was. Justin Trudeau's outmaneuvering of Tom Mulcair on the "left" in the federal election, as well as the campaigns of Sanders in the United States and Corbyn in the UK framed a context where any candidate was going to strike a more mildly "left" tone.

This is indicative of a new and broader shift to the left in the progressive wing of the public both domestically and internationally that, sadly, the NDP had basically nothing at all to do with.

It is more than a bit a humourous -- as well as a sign of its total irrelevance within the party -- to see what is left of the NDP's left framing the leadership contest as showing its "influence" when the sole candidate running on anything remotely like a serious leftist platform only got 17.4% of the votes of the 52.8% of New Democrats who got around to casting a ballot.

If this signals that the "left" is a serious force in the NDP, I fail to see how. Especially as there is no evidence at all that Ashton or most of those who backed her will try to set themselves up as an opposition within the party.

There was not much of a left socialist case for continuing with the NDP going into the leadership race (and whatever one there was rested rather tenuously on Ashton)  and any serious analysis of the results would indicate that there is even less of one now, especially in light of the party's total repudiation of a shift akin to that occurring in the British Labour Party.

The notion that Ashton or any other campaign pushed the party to the "left" is fanciful at best, diversionary at worst, and is more wishful thinking than so-called analysis. I think this will be borne out rather quickly.

Now, with the former deputy leader of the odious ONDP in charge, and with the focus being on the most shallow of charismatic electoral considerations,  you can look forward to an exceptionally light and entirely rhetorical version of "social democracy".

The left in Canada seems trapped in a feedback loop of either insisting that the NDP is or can be a vehicle that it is not and never will be, or of suicidally eschewing left electoral vehicles or coalitions outside of the NDP altogether. Singh's easy victory and the total absence of a cohesive and significant left alternative to it either within the NDP or in federal Canadian politics more broadly shows that while the conditions are clearly there to directly challenge neoliberal austerity capitalism ideologically and politically on the larger stage of party politics, leftists and socialists continue to be either unwilling or unable to take the steps necessary to do so.