The rehabilitation of the American right is a dangerous mistake 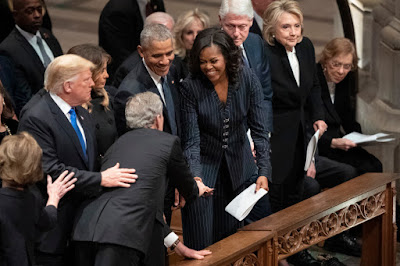 Perhaps it is understandable. Given the crass and debased manifestation that Donald Trump is of what is in fact the underlying thinking of the mainstream Republican right in the United States perhaps it should be no surprise that so many self-styled progressives have begun to rewrite even recent political history.

As Trump plays the buffoon while calling for the same racist, far right, anti-worker, militarist and authoritarian polices that Republicans have supported and been pushing towards to one degree or another since Nixon, somehow the American liberal tries to find solace by re-imagining bigots and vicious imperialists like George H.W. Bush and John McCain as paragons of civility and decency -- a revisionism that would almost be funny were it not so terribly dangerous.

McCain helped to legitimize the very wing of the Republican Party that now most vehemently backs Trump by choosing an extremist like Sarah Palin as his running mate in 2008 when he ran for President. His history of supporting anti-woman, anti-gay, anti-worker polices, military adventurism, his war crimes and his use of bigoted language has been well documented including here on The Left Chapter and in many other forums.

As the media and politicians lionized George H.W. Bush a few voices of reason tried to remind about the drumbeat of lies that led to the first Iraq War, the indiscriminate slaughter of civilians that was the result of his illegal invasion of Panama, his emboldening of fascists at home and abroad, and-on-and-on-and-on. A round-up of these articles can also be found here.

I suppose the dog-whistling of the Willie Horton ads in 1988 were a kinder, gentler campaign racism.

CNN host Don Lemon's castigating of Trump for going to Bush Sr's funeral was utterly misguided in its target. It would have been better to ask what folks like Jimmy Carter and Obama were doing there.

The sheer idiocy of liberals, progressives and the media glowing over the passing of candy by the second Bush of the Patriot Act, the Iraq War, the indiscriminate use of the death penalty and Hurricane Katrina -- to name just a few of his crimes --is genuinely grotesque. Michelle Obama may have been willing to gush “I love him to death...He’s a wonderful man” but I rather suspect history will deliver a very different verdict.

Of the little tender moment a writer in the Boston Herald opined:


This was a statement that George W. Bush plainly wanted to make, and wanted his countrymen to see: in an America convulsed by the assaults on decency and civility that Trump and team have visited upon it, it is not too late to restore the best of what have always been regarded as American values.

This is such unmitigated bullshit it is very hard to wrap one's mind around it. Bush's two terms as President were a prolonged and non-stop set of "assaults on decency and civility".  It is of such recent memory that it astounds that so many seem to have entirely forgotten what it was like to live through his reign and the relentless attacks of his Presidency on American democracy and rule of law. Never mind the millions who have been slaughtered directly due to Bush's illegal wars based on lies and misinformation.

Bush has in no way stopped his indecency, by the way, and found time in his retirement to make calls to swing senators in support of Trump Supreme Court nominee Brett Kavanaugh. What a wonderful fellow.

All of this reactionary revisionist liberal and media nonsense plays to profoundly false notions of an America and American political class that was allegedly once pure, just, democratic and fair. An America that was once great.

That America is a chimera. A lie. It never existed. And neither did the "good" Republicans and conservatives. Reagan, both the Bushes, McCain. They were all practitioners of a bigoted politics with a deep authoritarian streak and they all worked with the Republican and Democratic politicians in congress to push the envelope ever further towards a toxic, racist, reactionary, corporate political culture that allowed a President Trump.

For all the hue-and-cry about Trump's alleged "indecency" sitting Republicans have had little problem falling in line with his legislative agenda. Neither have many corporate Democrats.  Republicans on the state level continue to undermine what is left of American democracy -- such as it was -- through gerrymandering, voter suppression, vote fraud and even outright authoritarian maneuvers such as those that are occurring in Wisconsin and Michigan.

Every time the Republicans push the United States further and further towards the right the Democrats adapt and ultimately fall in line with the new normal.

In the interregnums where the Democrats supposedly reigned little was made better. Clinton campaigned as a pro-death penalty, anti-"entitlement" Democrat and took great pride in policies and rhetoric that led to the dismantling of the American welfare state, the scapegoating of immigrants and the mass incarceration of black Americans.

Obama singularly failed to hold the Wall St. elite accountable for the crimes that brought the 2008 economic meltdown and continued Bush's imperialist and adventurist aggressive war polices with little to no change. In fact, of course, Obama left a terrible legacy of death and destruction with the ongoing and endless war in Afghanistan, the increased use of illegal drone attacks, the appalling Libya intervention, the coup in Honduras,and the rest of the shitshow that was his foreign policy record.

Now Hilary Clinton echoes Trump by calling for Europe to curb immigration to "stop" the far right. It is not much of victory to keep extremists out of power by adopting their worst policies.

Ultimately this is where the danger lies in creating this myth of the virtuous, "good" American reactionary. It not simply normalizes what was the right wing extremism and incivility of just ten years ago, it also helps to normalize the politics and ideological underpinnings of it. It creates the conditions for the birthing of an enfant terrible like Trump and then for the worse yet that may follow.

See also: Trump -- Reflections on the state and the revolution
Posted by Michael Laxer at 10:52 AM