Death of a delusion: The ONDP's internal fictions and the Sudbury by-election loss 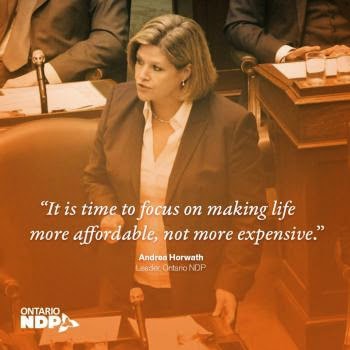 On an abstract level I think it is fair to say that the by-election result last night in Sudbury, which saw the Liberals retake the seat from the NDP, is somewhat disappointing and reinforces the very deep, and perfectly reasonable,  cynicism many feel about what passes for politics these days.

As anyone who has read my (numerous) articles on the NDP knows, I feel that they have clearly veered away from any critique of capitalism or even a seriously reformist social democratic agenda and towards a misguided attempt at "left" populism based around tiny little supposedly popular "platform" planks and almost reactionary rhetoric about the empty pockets of tax-payers. Though, in the case of this Sudbury by-election, they did have a very good candidate it is hard to endorse them in any context given the fact that with the extreme levels of caucus "discipline" and centralization of power in the party into the leader's office, individual NDP MPPs and caucus members have less meaningful input into the party's public face then ever before.

Having said that, it is fairly clear that the Liberals behaved in what can most generously be called "ethically challenged", and even possibly criminal,  ways in their campaign to get former NDP MP Glenn Thibeault elected.

Liberals have a long tradition of behaving like this.  It is all a game to them, this politics thing, and they are good at it.

Just not always good at it in what are necessarily legal ways!

To see their candidate win, in the end, rather easily in spite of this, says little that is good about the way our democracy is unfolding.

But, in the wake of this clearly disastrous result last night for the NDP, I think we can now officially pronounce the lie that it was "white wine" swilling Toronto "elitists" that caused the ONDP to flounder and lose in the last provincial election, dead. This self-serving mythology, had persisted among NDP partisans as some type of collective delusion despite the fact that they had done far more poorly than anticipated in the general election and despite the fact that, as the so-called "elitists" had warned, they had lost the bulk of their Toronto caucus (and the NDP cannot possibly win a general election without almost sweeping Toronto).

They clung to this delusion by pointing to the supposedly significant pick up of three seats outside the city (one of which was Sudbury)  that, somehow, even though they would now be languishing powerless as the third party for the next four years instead of holding the balance of power, proved that it had been the right call to jettison all trace of the party's traditional narrative and alienate many of it traditional supporters.

During the election this alleged juxtaposition of the "hard working" Andrea Horwath and crew and all of those fictional wine drinking leftists and activists sitting lazing around Queen St. wine bars, one supposed, developing new plots to undermine the NDP, had been most idiotically advanced by union leader Smokey Thomas, who framed it this way both in print, and then most disgracefully and reprehensibly, on Sun TV, where he also basically said he would prefer to see Hudak elected over Wynne!

Even after the fiasco of the election result this narrative stuck within the ranks of the party. It was not the ONDP's bankrupt strategy itself that was at fault, it was those traitorous Toronto elites! "They" had stabbed the party in the back and were portrayed as some type of Liberal "fifth column" despite the reality that the critique of the party had been from the left and from activists, many NDP supporters for decades, who were not Liberals.

But, it was easier to accept this nonsense than reality one has to suppose and the party went on to actually reward failure at its next convention by giving Horwath a higher approval vote then before the election and by not altering course internally at all, other than by bringing in an organizer from the even more right wing Manitoba NDP!

In politics, though, a party's internal fictions cannot forever stave off the real world. This narrative had been bullshit to begin with and is totally done now.

If this by-election, in these circumstances, could not be won against a governing party who were being publicly exposed for highly dubious behaviour, it is now beyond obvious a change in direction by the party is seriously needed.

The ONDP failed to show any ability at introspection at all after the last election. Perhaps they will finally see that some is now clearly in order.

I would advise against holding one's breath on this front, however.
Posted by Michael Laxer at 7:12 AM