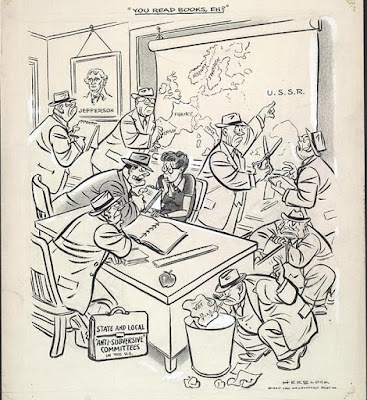 Herb Block (Herblock), a courageous cartoonist for the Washington Post, drew this as the McCarthy era began to intensify and hundreds of librarians and school teachers began to lose their jobs for having left-wing, "anti-American" or "anti-religious" views.

Many of these workers were women and were denounced by fellow community members or workers caught up in the appalling anti-democratic climate of the time.

(The Daily LIFT - Leftist Image for Today - is a new The Left Chapter feature posting a daily photo, cartoon, artwork or other image related to leftist history or contemporary realty.)
Posted by Michael Laxer at 4:47 PM