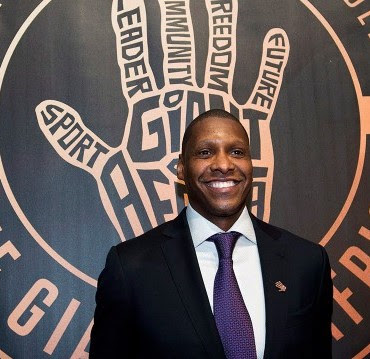 It is time to call a technical foul on Toronto Raptors General Manager Masai Ujiri for his ties to one of the world’s most ruthless dictators. Through his Giants of Africa charity Ujiri has bestowed legitimacy on Paul Kagame even as local newspapers document the Rwandan president’s violence.

Before their December 5 game against the Philadelphia 76ers the Raptors celebrated Nelson Mandela as the Giant of Africa. A report produced for the two-day charity fundraiser noted, “since Giants of Africa’s first Mandela Tribute event held in 2014, we are grateful to have had many influential guests participate in our initiative.” Kagame and Barack Obama were the only two politicians listed.

At an NBA meeting in New York in September Kagame thanked Ujiri and Raptors governor Larry Tanenbaum, lauding the Giants of Africa initiative as “another step for Africa in our development.” In August Kagame opened a training camp in Kigali with Ujiri and NBA Commissioner Adam Silver while two months earlier the Raptors GM met the Rwandan leader at the G7 Summit in Quebec City.

Last year Ujiri travelled to Kigali to unveil a new basketball court with Kagame. In 2015 the president’s son, Ian Kagame, attended the inaugural Giants of Africa camp in the Rwandan capital. During that visit the president hosted the Raptors GM for dinner. According to a Globe and Mail story, the one-time head of Ugandan military intelligence told “Ujiri that he’d woken in the middle of the night to watch Raptors’ playoff games.”

As this mutual love affair developed there were questions about the team’s association with a ruthless dictator. During the NBA All-Star weekend in February 2016 the Toronto Star contacted Ujiri about Kagame speaking at numerous events, including a documentary screening about Giants of Africa camps at the TIFF Bell Lightbox. The Raptors GM told the paper “there is no controversy.”

A month before Kagame’s visit to the NBA All-Star weekend the Globe and Mail reported: “Village informers. Re-education camps. Networks of spies on the streets. Routine surveillance of the entire population. The crushing of the independent media and all political opposition. A ruler who changes the constitution to extend his power after ruling for two decades. It sounds like North Korea, or the totalitarian days of China under Mao. But this is the African nation of Rwanda — a long-time favourite of Western governments and a major beneficiary of millions of dollars in Canadian government support.”

Previously Toronto Star Board Chair John Honderich published a commentary in his paper headlined “No freedom for press in Rwanda.” The 2007 story noted that the government “ordered the summary firing of the Sunday editor of the country’s only daily for publishing an unflattering photo of the president ... the president’s office only wants their man shown in command and in the middle of the photo ... All this happened days after a fledgling new newspaper, called The Weekly Post, was shut down by the government after its first issue.”

Ujiri’s public “friendship” with Kagame has been taking place amidst growing recognition of Kagame’s violence. A 2015 National Post headline noted: “Rwandan intelligence agents harassing opponents in Canada, border service says” while the Star published stories that year titled: “Toronto lawyer claims he’s target of death threat from Rwandan government” and “Four other Canadians believe they’re being targeted by Rwanda.” Since 2014 the Globe and Mail has published at least eight front-page reports about Kagame’s international assassination program and responsibility for blowing up the plane carrying Rwandan President Juvénal Habyarimana, which triggered mass killings in April 1994. Two months ago the Globe added important details to the abundance of evidence suggesting Kagame is the individual most responsible for unleashing the hundred days of genocidal violence by downing a plane carrying two presidents and much of the Rwandan military high command.

For that incident alone Kagame has as much African blood on his hands as any other individual alive. But, the undisputed “military genius” also played an important role in toppling governments in Kampala in 1986 and Kinshasa in 1997. After the latter effort Rwandan forces reinvaded the Congo, which sparked an eight-country war that left millions dead between 1998 and 2003. In October 2010, the UN Office of the High Commissioner for Human Rights released a report on the Congo spanning 1993 to 2003 that charged Rwandan troops with engaging in mass killings “that might be classified as crimes of genocide.”

Since then Rwandan proxies have repeatedly re-invaded the mineral rich eastern Congo. In 2012 The Globe and Mail described how “Rwandan sponsored” M23 rebels “hold power by terror and violence” there.

Kagame is not a Giant of Africa. He’s a ruthless dictator with the blood of millions on his hands. The Raptors disgrace themselves and the memory of Nelson Mandela by associating with him.

Yves Engler is the author of 10 books, including Canada in Africa: 300 years of aid and exploitation expectation.

Posted by Michael Laxer at 5:04 PM