When it comes to opportunistic hypocrisy on the environment, Rachel Notley is right up there with Trudeau 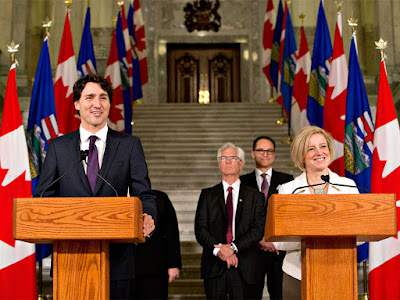 If you are among the growing number of people who are rightly outraged by Canadian Prime Minister Justin Trudeau's hypocrisy on environmental issues then you should be equally outraged by the actions and stances of his newfound, close ally on these issues, Alberta's NDP Premier Rachel Notley.


In a recent widely shared article in The Guardian, American environmentalist Bill McKibben pointed to Trudeau's terrible record when it comes to anything but rhetoric:


Trudeau says all the right things, over and over. He’s got no Scott Pruitts in his cabinet: everyone who works for him says the right things. Indeed, they specialize in getting others to say them too – it was Canadian diplomats, and the country’s environment minister, Catherine McKenna, who pushed at the Paris climate talks for a tougher-than-expected goal: holding the planet’s rise in temperature to 1.5C (2.7F).
But those words are meaningless if you keep digging up more carbon and selling it to people to burn, and that’s exactly what Trudeau is doing. He’s hard at work pushing for new pipelines through Canada and the US to carry yet more oil out of Alberta’s tar sands, which is one of the greatest climate disasters on the planet.

One of the first things that President Trump did upon taking office was to reverse the environmentally and morally correct decision of his predecessor, Obama, to stop the Keystone XL pipeline. When he did this -- in defiance of basic logic around stopping climate change and with no regard for the widespread opposition of Native American activists to the project -- Trudeau quickly expressed how pleased he was in a moment that will, I assure you, be looked back upon with great shame one day not very long from now.

Right there with him in celebration was Notley.

To be clear, the Liberal Prime Minister and Canada's only New Democrat Premier united to herald the reversal of one of Obama's few principled environmental decisions by a newly minted President who rose to power on planks that included bigotry and extreme climate change denial and who has absolutely no regard for Native concerns or rights.

To call this a low moment for Canadian 'progressives' would be a profound understatement.

People need to understand the depth of just how craven actions like these are. As McKibben rightly pointed out:


173bn barrels is indeed the estimate for recoverable oil in the tar sands. So let’s do some math. If Canada digs up that oil and sells it to people to burn, it will produce, according to the math whizzes at Oil Change International, 30% of the carbon necessary to take us past the 1.5C target that Canada helped set in Paris.
That is to say, Canada, which represents one half of 1% of the planet’s population, is claiming the right to sell the oil that will use up a third of the earth’s remaining carbon budget. Trump is a creep and a danger and unpleasant to look at, but at least he’s not a stunning hypocrite.
This having-your-cake-and-burning-it-too is central to Canada’s self-image/energy policy. McKenna, confronted by the veteran Canadian environmentalist David Suzuki, said tartly: “We have an incredible climate change plan that includes putting a price on carbon pollution, also investing in clean innovation. But we also know we need to get our natural resources to market and we’re doing both.” Right.
But doing the second negates the first – in fact, it completely overwhelms it.

It is, basically put, utterly impossible to be serious about climate change and yet to think it acceptable and possible to exploit the tar sands without seriously exacerbating an already existential threat to human existence.

To justify such bald, overt and grotesque hypocrisy with the usual right wing rhetoric about jobs and the economy simply makes it all that much worse by reinforcing the basic arguments that leaders like Harper and Trump and that the right and the business community use every single day to derail and to stop any attempt to do anything at all to end the destruction and havoc being caused at an ever accelerating pace by fossil fuels and the fossil fuel industry.

Defenders of Notley on the left will point to the "difficult position" she is in, or to her government's progressive actions and policies, as well as to how she is an improvement over the past Conservative governments the province had for decades -- as if this is a standard that should be used as a bar for anything.

Yes, Notley is not as bad as the extreme wing of Canadian conservatism in Alberta that ultimately gave us the Reform Party and Stephen Harper! Well done.

But one way Notley is no different from those who came before her in Alberta is in her coldly calculated willingness to put her own narrow provincial political interests ahead of everything else.

So it is that she has shamefully barred any of the members or staff of her government from helping the BC NDP in its efforts to end over 20 years of deeply reactionary and destructive Liberal Party governance there, due exclusively to their opposition to the Trans Mountain pipeline expansion. This makes clear that Notley will de facto support any politician, even one as awful as Christy Clark, to push Alberta's pipeline and tar sands agenda and to stay in power. That Clark's regime has been terrible for B.C. workers, those living in poverty, Native Peoples, tenants, women and just about any part of the population that New Democrats are supposed to care about apparently does not factor in at all.

They are not Albertan, so too bad for them I guess.

New Democrats might want to consider what this will mean in the coming federal election if they have a leader like Peter Julian or Niki Ashton who are strongly opposed to building new pipelines. It is rather clear that they will not be able to count on any solidarity or support from Notley who appears to be taking bankrupt Canadian social democracy's fixation on "power" to its logical conclusion.

Notley's government is developing as the ultimate poisoned chalice for the NDP with a level of sheer opportunism that leads it to be willing to align itself with anyone from Trump to Trudeau to Clark who will back its tar sands and pipeline agenda regardless of not just how harmful this agenda is in-and-of-itself to the planet and for climate change, but also of how odious the broader policies of these new 'friends' may be overall.

See also: The threat of climate change is immediate and real -- Ending 'car culture' is a key part of combating it
Posted by Michael Laxer at 3:56 PM