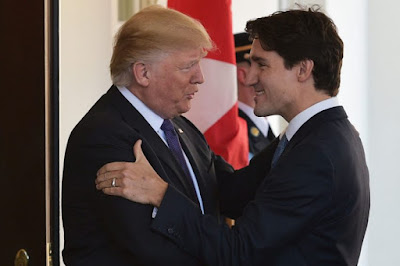 What a difference a night and an imperial missile strike makes. Especially to those who jockey for position within the shadow of an empire.

As we all know President Trump flexed American military muscle in a reckless and dangerous strike against a Syrian airfield that was also intended to send a message to Syria's Russian allies.

The Western media -- which by-and-large embraces its leaders narratives of the western nations as forces for democracy and humanity -- has predictably bought into the notion that Trump's about face was motivated by sincere outrage about the gas attack allegedly made by the Syrian regime. Even nominally "progressive" media outlets like The Guardian took at face value that Trump was personally horrified by pictures of dead Syrian children.

But this is all total rubbish. Anyone, anywhere who is not a diehard Trump supporter who actually believes this is a credulous dupe. The parade of media types going along with it is simply a predictable outcome of how beholden and captive they are to western imperialist lies and myths that they have helped to create and sustain for decades, now often given a "liberal" or "humanist" blush to modernize older more explicitly racist notions of the west's "civilizing mission".

Trump did this to shore up collapsing support both broadly domestically and within his own party and given the nature of the man the idea that he cares at all about Syrians is absurd. Trump has attempted and wants to bar all Syrians, including those fleeing the carnage, from the United States, so the crocodile tears here are obviously a joke.

The President is a deeply dangerous man motivated by the basest egotism and by delusions brought on by a megalomaniac's personality. The only human being he cares at all about is himself and when he thought bombing Syria benefited him and his administration he bombed it.

Never mind the continuing, typical American hypocrisy after the bombing of mosques in Syria and the slaughter of civilians by US bombing in Mosul under Trump, this action is certain to inflame tensions in the region and to have potentially serious consequences due to the direct involvement of the Russians on the ground and in the air in support of the Syrian regime. It has led to an immediate escalation of rhetoric, to the Russians having ended the formal communication that was established to prevent accidental US-Russian conflict, and having dispatched a cruise missile outfitted frigate to the region.

American liberals in the Democratic Party have always been supporters of the broad notion of American imperial legitimacy and have from the start been goading the administration into action by claiming that somehow Trump was a Russian plant. They presumably thought this a clever strategy against him given his alleged ties to Putin. They backed themselves into a corner of their own making where they will have little choice but to now applaud his every military act on this front, not that that was not their inclination anyway. But their pathetic embrace of Trump's action should come as no surprise, no matter this context, after the blood drenched Presidency that was Obama's time in the Oval Office.

Far less clear in its reasoning, at least at first, is the immediate approval of Trump's attack by the Canadian Liberal government and by Justin Trudeau.

Trudeau less than twenty four hours prior to the attack said that there needed to be an investigation due to "continuing questions" about who was responsible for the gas strike in Syria and advised caution.

Immediately after Trump unleashed the cruise missiles, however, Trudeau was fully on board the war train and asserting now with implied certainty that there was no question of the Syrian regime's guilt. All his pretensions to supporting United Nation's investigations and all his supposed concern about multilateralism were gone.

It is amazing what loyal little puppies Canadian Liberals are to American Imperialism and how they love the whiffs of grapeshot the empire likes to unleash. The Trudeau government's utter spinelessness makes perfect sense in this context.

It likely makes them feel that they are important players on the world scene as they get the phone call from the Americans advising them in advance of the strike, they can pretend that they matter to the Yanks, and they can stand up in parliament, all serious and statesperson like, and play at being big children one day hoping to grow into adults.

The fact that Trump is a megalomaniac whose motives for this attack are anything but humanitarian, that supporting his actions helps to normalize his vile administration, and that these same liberals were denouncing Trump on every front right up until they got to get in on the political boost that seems to come with a certain kind of media endorsed violence, does not factor into their amoral, opportunistic, sad thinking at all.

But Canada's Liberal government and other western governments lining up to embrace and endorse this are faced with the immediate conundrum that they are now active apologists for a regime that they know to be headed by a President of uncommon mental instability and surrounded by extremists, bigots, racists and religious lunatics.

In even the short run this will almost certainly prove to have been a very bad idea.

See also: Trump -- Reflections on the state and the revolution
Posted by Michael Laxer at 8:42 PM