From Franken to Assange to Clinton, there can be no ideological exceptions for sexual assault 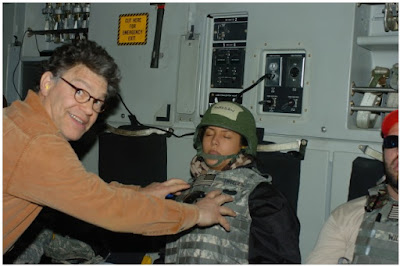 If you have been fortunate enough to have not yet seen the photograph here take a good look at it.

It is a picture of future US Senator -- then well-known comedian -- Al Franken molesting and sexually humiliating a female soldier named  Leeann Tweeden. In Canada this would legally qualify as sexual assault. In my opinion it morally and ethically does no matter where you are in the world, though sadly not all jurisdictions in the United States share this opinion.

Regardless, it is a sick, grotesque, petty and ugly act by a man who really can make no excuse for it.

He thought it was funny enough that he had someone snap a shot of it.

It takes a particular type of mind to want to photograph a sexual assault or humiliation as a laugh and that mind would be a disgracefully misogynist one.

It is also rare that an assault is 100% proven in advance of all the attempts to discredit the woman claiming it but here it is. The photo really speaks for itself unless you are delusional. It makes it impossibly hard not to believe her assertion that Franken also pushed her to engage in an aggressive kiss pretending it was a "rehearsal".

And yet many "liberals" and "leftists" on Facebook and twitter are rushing to his defense. People who generally claim to care about sexual assault and women's issues. People who would never excuse this behaviour if it had been done by a Republican or right-winger of any kind.

Sadly, there is nothing at all new about this. Liberals and lefties have done this before with figures like Bill Clinton and Julian Assange. And it has to stop.

Yes, Donald Trump is awful and a vicious misogynist.

Yes Roy Moore is a shameful rapist of young women.

That does not make what Franken did ok, it does not lessen its ugliness and it does not absolve him in anyway.

The "left" hypocrisy towards men like this is not just tiresome it is wrong on every level. We need to expose and be rid of folks on the left whose opposition to sexual assault and whose version of believing women is based on the ideology of the offender.

The violence and viciousness of sexual assault, domestic abuse and the sexual humiliation and objectification of women is intrinsic to patriarchy and the systemic oppression that activists and politicians on the left purport to oppose.

It is time for that to apply just as fully within what is broadly seen as our own ranks as it does when it happens on the right.

No exception for Assange: Rape apologetics and the left
Posted by Michael Laxer at 5:37 PM